Bullying Ralphie and the other children.

Intimidate and coerce the other children into saying Uncle (succeeded for a while, but later failed).

Scott "Scut" Farkus is the main antagonist of the 1983 classic family film A Christmas Story. He is the neighborhood bully who picks on Ralphie Parker, his friends Flick and Schwartz and Ralphie's younger brother Randy. Scut also has a right-hand man named Grover Dill.

In A Christmas Story

Later, before school, he scares Ralphie and his friends, and Grover tells Ralphie to come to them, presumably to beat him up. Ralphie and Schwartz run off, leaving Flick, who Scut makes say "uncle" as well as leaving him with a black eye. After school Scut hits Ralphie with a snowball and tells him that when he tells Ralphie to come, he better come. Ralphie starts crying, and Scut calls him a crybaby, mocking his crying and laughing nastily.

Having had enough of Scut bullying him along with his friends and Randy, (as well as a few bad days in general), Ralphie finally snaps and charges angrily at Scut, tackling him to the ground. Ralphie proceeds to beat up Scut in a blind fury (which present-day Ralphie, who narrates the film, describes as saying that "a fuse blew" and he had gone "out of his skull.") When Grover tries to step in and help Scut, Ralphie punches him, and Grover takes off, saying he was gonna tell his dad. The other kids come and watch, and Randy, Schwartz and Flick squeeze through the fence to get a better look. Randy takes Ralphie's glasses (which he took off after Scut threw the snowball) and runs to get their mom. While fighting him, Ralphie starts swearing non-stop, which shocks the other kids. Randy comes with their mom, who pulls Ralphie off of Scut and takes him and Randy home.

After they leave, Scut is now humiliated and gets up (now with a bloody nose and a loss of pride and dignity), still crying softly, and Schwartz and Flick sneer at him and walk away. From then on, Scut Farkus never bullied anyone again.

It’s unknown what happened to him after that, but it's possible that his reputation as a fearsome bully was ruined after all the kids witnessed his beating. It’s also possible that he got punished by his parents.

In the sequel, a new bully named Lug Ditka takes Scut Farkus' place as the top bully. Then he along with Grover Dill have become Lug's toadies.

Scut Farkus has been regarded as one of the most iconic movie bullies and villains in film history and Zack Ward’s portrayal has been critically acclaimed. 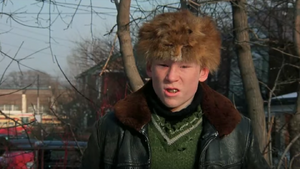 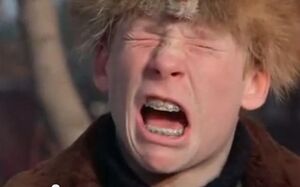 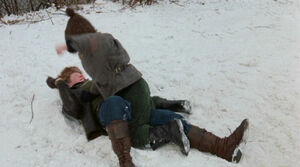 Scut being slugged by Ralphie