Villains Wiki
Register
Don't have an account?
Sign In
Advertisement
in: One Piece Villains, Pirates, Manga Villains,
and 23 more

Executive of the Donquixote Pirates

Señor Pink (in Japanese: セニョール・ピンク, Senyōru Pinku) is an executive of the Donquixote Pirates' Diamante army and an antagonist in One Piece.

He was voiced by Kazuhiro Yamaji in Japanese and Ethan Gallardo in English.

Unlike the other members of his crew, Señor Pink is kinder, as shown when he rushed to help an old lady even though it was ploy and protected a cat from getting hurt.

He also keeps his word as he accepted defeat from Franky after the latter survived his strongest attack and put up no defense to stop him.

Señor Pink has been involved with the Donquixote Pirates for at least sixteen years, back when Doflamingo's brother, Corazon, still held a position as an elite officer for the crew. During this time, Senor met a woman named Russian, whom he fell in love with and eventually married. Due to the latter's detest of pirates, Senor managed to keep his identity as a pirate hidden, instead passing off as an ordinary banker.

The two eventually bore a son, whom they named Gimlet. However, the infant died while Señor was away on a business trip with the Donquixote Family. After Russian discovered her husband was a pirate, she ran away and fell victim to a landslide, which caused her to enter a permanent vegetative state.

Regretful, Señor Pink adopted his current persona by wearing Gimlet's bonnet and frequenting Russian at a hospital in order to make her smile, which succeeded despite his wife's emotionless state.

After Russian's presumed death, Senor Pink resumed his role in the Donquixote Family and partook in the takeover of Dressrosa by Doflamingo.

During the Straw Hats time on Dressrosa, Señor Pink engaged Franky in a heated duel, which eventually turned into a test of endurance and will. After he willingly took a direct hit from Franky's Strong Hammer, he performed another suplex. After Franky declared to the dwarves that he would withstand every attack, Señor Pink challenged Franky with surviving his Baby Buster stating if he does so then Pink will accept defeat.

The attack failed to defeat the cyborg and while taking a beating from Franky's "Iron Boxing", Pink began to reminisce about his departed wife and son. Pink shed a tear upon falling to the ground. Franky respectfully wiped Pink's tear and told him that he would like to hear about the story about his loved ones over a few drinks. 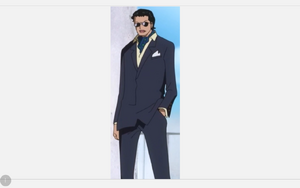 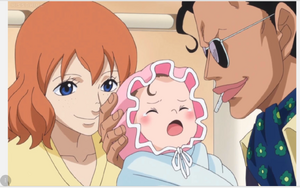 Senor Pink with his wife and son. 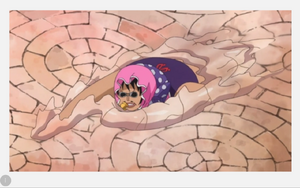 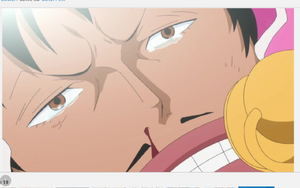 Senor Pink's eyes in the anime.