Attack everyone they know (ongoing).

Beat up Squidward for denying that sea bears exist (succeeded).

The Sea Bear is a large piranha-like fish with claw-tipped fins and the head of a grizzly bear. Squidward did not believe in the sea bear's existence until he was attacked by one in The Camping Episode where it is featured as the main antagonist. However, SpongeBob and Patrick are fervent believers, having read about them in the Bikini Bottom Enquirer and Fake Science Monthly.

An exceptionally violent and vicious animal, the sea bear took an immediate dislike to Squidward and attacked him repeatedly throughout the episode. The beast is attracted when Squidward, in mockery of SpongeBob and Patrick's belief in its existence, performs everything that supposedly provoke the animal to violence leading the terrified duo to draw a dirt circle to deter the sea bear, apparently the only successful method of doing so. After teasing them when the sea bear does not appear, the animal shows itself and readjusts Squidward's sombrero to the position that serves to enrage it. The sea bear then violently mauls him and repeats this five times after for differing reasons: running, limping, crawling, and simple dislike for the cephalopod (twice).

Conceding, Squidward jumps in SpongeBob and Patrick's circle to escape the bear. The animal prepares for another attack when it notices the dirt circle. The circle actually proves effective when the sea bear, despite being easily capable of bypassing this incredulous defense, seems to be put off by it and grudgingly leaves after threatening Squidward with hostile gestures likely intending to attack him again when the chance arises. However, the sea bear is never seen again.

There is a wide range of things that can attract a Sea Bear and why.

Sea Bears are very treacherous, aggressive, and merciless animals that won't hesitate to maul or kill their prey, be it due to merely for hunting or the said prey's provocative behavior such as stomping or disobeying other warnings above. At first, it attacked Squidward for his provocative behavior out of ridiculing its kind's existence by disobeying SpongeBob and Patrick's warnings, but it eventually mauled him several times for attempting to flee. However, they're not evil nor entirely hostile animals, given that one of them antagonized Squidward due to the latter ignoring SpongeBob and Patrick's warnings; it can be deduced that Sea Bears are actually territorial animals that are cautious with anyone who dares to enter their territory and won't antagonize nor kill them unless they displayed provocative behavior.

In spite of their aggressive behavior, it is implied that the Sea Bears won't intrude another animal's territory just to chase the instigator of the attack and would begrudgingly have him/her spared, which explains why they won't pass the Anti-Sea Bear circle.

In the Indonesian dub, SpongeBob said that Sea Bears would haunt campers, including even those whom merely camped near their home, implying that sea bears are attracted by campers who wander off to fishes' population, and the rule not to provoke them also apply as much as in their territory.

The only known thing that can prevent a sea bear attack is an Anti-Sea Bear circle (only a circle, not an oval, it has to be a circle). All the experts say it's the only thing that can stop a sea bear. It is also revealed that the sea bears are natural enemies with the Sea Rhinoceros (which are far more dangerous and can be attracted by the sound of a sea bear attack). The sea bears can also being prevented with tummy tickles and jellyfish jelly, and they seem to love them. 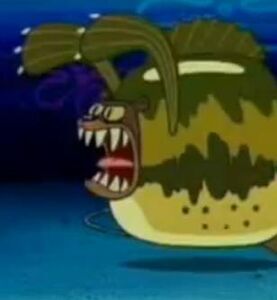 Sea Bear in The Camping Episode. 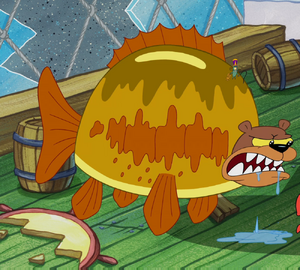 Sea Bear in Married to Money. 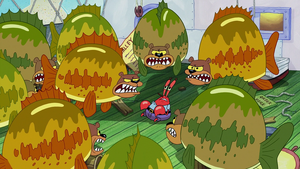 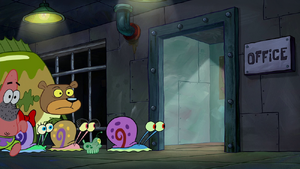 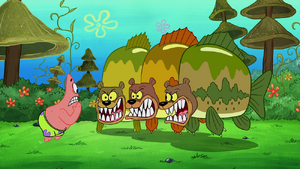