Dragon
The Sea Feilong is large, dark, serpent-like creature of Grimm. It is a minor antagonist of the web series RWBY.

The Sea Feilong is an gigantic serpent creature with large red wings, short arms with claws, a bone scaled underbelly and a spiked spine. Its entire skin is black and has a large external skull.

In "Of Runaways and Stowaways", It swims below a sea ship heading for Menagerie that Blake Belladonna and Sun Wukong are aboard. It rises up and its appearance startles the crew as they have never seen such a large Grimm. The captain tells crew to prepare their ships guns, but Blake tries to take on it herself. The Sea Dragon turns out to be fast as it dodges the ships guns swiftly. It body absorbs the shots that do hit it.

It is able swim and fly. It can live in the ocean and is also fast and agile despite its large size. It shoots lighting from its mouth 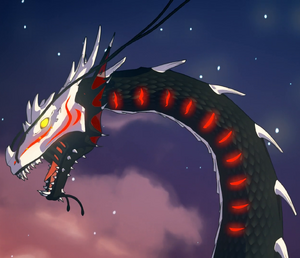 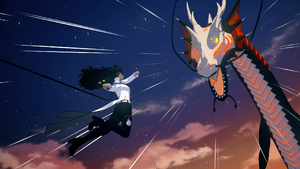 The Grimm Sea Dragon vs. Blake. 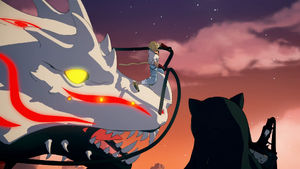 The Grimm Sea Dragon vs. Blake and Sun. 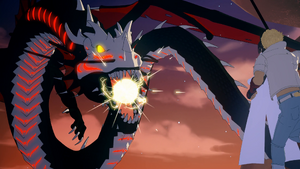