Conquer the lands of Earth (failed).

The Seafolk (海人族 or 深海族) are villains from One Punch Man. They are a group of humanoid marine monsters led by the Sea King, who have invaded the land and seek to claim Earth for themselves and to use humans as their new source of food.

Most of them resemble a variety of different aquatic based creatures such as an octopus and squid. There is at least one fish-like member and one crab-like member.

One of them, a large brown octopus humanoid, announces their invasion only to be killed by Saitama after mocking his head. The others start the invasion on J-City, where they confront the A-Class hero Stinger. Stinger gets beaten badly trying to hold them back while everyone escaped, but he finishes the remaining four of them with a single move. The only member remaining was the Sea King himself, who alone defeats various heroes until he is finally killed by Saitama. 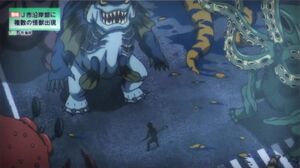 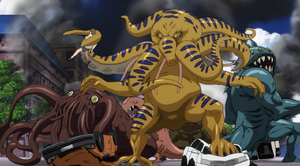 Retrieved from "https://villains.fandom.com/wiki/Seafolk?oldid=3300322"
Community content is available under CC-BY-SA unless otherwise noted.