Sealsdramon is a minor villain in Digimon Xros Wars/Fusion and Digimon Ghost Game.

It was voiced by Nobutoshi Canna who previously voices Examon in Digimon Xros Wars in the Japanese version.

Sealsdramon is a Champion Level Digimon that resembles a small mechanical dragon. On his back, he carries knives which he uses to shoot Digimon. In Digimon Ghost Game, it is a serial killer responsible for slaughtering innocent Digimon. 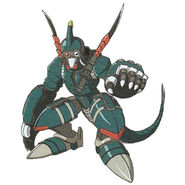