Locate the Engineers to find out about the origin of life

Sean Fifield is a major antagonist in the 2012 Alien prequel Prometheus. He is a geologist who is part of a science crew sent to find the origin of life on Earth.

He was portrayed by Sean Harris, who also portrayed Solomon Lane in the Mission: Impossible franchise, Jungler in Deliver Us From Evil and Stretch in Harry Brown.

Fifield is one of the scientists on the USCSS Prometheus, sent by Peter Weyland to search for the origin of life on Earth on LV-223. Following two years in hypersleep, Fifield is woken up by David 8 along with the rest of the crew. While being briefed about their mission to locate whoever created humanity, Fifield shows disbelief at the idea that aliens were responsible, commenting "bullshit" when Dr. Elizabeth Shaw tells him this.

During the exploration of a nearby temple after the ship lands, Fifield activates his PUPS in order to virtually map the entire temple. The team locates the headless body of a giant humanoid creature which causes Fifield to become panicked and unreasonable. He berates other members of the expedition before he and another scientist named Milburn flee deeper into the temple. A storm then hits and they are forced to wait it out.

During the storm, the two scientists are attacked by aliens called Hammerpedes which kill Milburn. Fifield decapitates one with his knife, causing the creature's blood to spray him in the face after melting his visor.

The next day, a mutated Fifield arrives at the Prometheus and attacks the crew. He uses the enhanced strength and endurance given to him by the mutation to kill five crew members, being set on fire in the process. Other crew members finally kill the mutant by running him over with a nearby transport before shooting him as he lies on the ground. 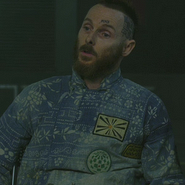