Screaming at the press.

He is portrayed by Melissa McCarthy, who also played Diana in Identity Theft, and Shannon in The Heat.

This portrayal of "Sean Spicer" is a loud, vituperative, and aggressive Press Secretary, who is verbally and emotionally abusive to his assistant, Sarah, and even assaults a reporter for complimenting her.

He appears to be an exaggeratedly brutish character, as he doesn't use logic to make points, but rather screams the same things over and over.

He is consistently in denial about the possibility that he is wrong, or misinformed, repeatedly making up numbers about the attendance count at "Donald Trump"'s inauguration, forcing Kellyanne to defend his image.

"Sean Spicer" has been one of the more villainous portrayals, as he is presented as a vituperative liar. He has committed numerous villainous acts including, but not limited to: 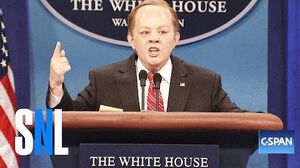 Retrieved from "https://villains.fandom.com/wiki/Sean_Spicer_(SNL)?oldid=3304630"
Community content is available under CC-BY-SA unless otherwise noted.