Training new candidates to serve as maids of Nazarick.

Serve Nazarick as the last line of defense (formerly).

Serve Ainz Ooal Gown's cause and carries out his orders.

Sebas Tian (or simply Sebas) is one of the main protagonists from the light novel series, Overlord. He is a butler NPC created by the Supreme Being, Touch Me, and serves as the leader of the Pleiades combat squad.

Originally created to serve as Nazarick's last line of defense, he now carries out spy missions to gather information and explore more of the world for Ainz Ooal Gown. Although he is one of the least evil characters in the series, with his karma rating even denoting good karma, this does not hold him back from brutally murdering anyone who disrespects Ainz.

In Japanese version, he is voiced by Shigeru Chiba, who also voiced Buggy of One Piece, Kefka Palazzo from Dissidia Final Fantasy, Discord from My Little Pony, and Emperor Pilaf and Raditz of the Dragon Ball series. In English version, he was first voiced by Ed Blaylock in Season 1 and later by Bill Jenkins in Season 2.

Sebas in general has the appearance of an elderly man, dressed in a butler uniform. He has white hair and wrinkles around his face. Sometimes, he is depicted with one of his eyes colored black (likely depicting his bloodlust).

While it has yet to be seen, Sebas's true form is said to be that of a dragon.

Like many of Nazarick's citizens, Sebas pledges his loyalty to Ainz Ooal Gown, willing to carry out his orders whenever. Because he was created by Touch Me, he is depicted to have a sense of care for others and justice. Unlike many Nazarick beings, Sebas genuinely cares for humans and is willing to help them. Recently, he has grown fond of Tsuareninya Veyron, who in turn has fallen in love with him for his care and compassion.

Although he has no hatred towards humans in general, he only believes that those with good heart are worth taking care of. He is disgusted by vile humans that commit horrible crimes and actions such as torture, rape and murder. He has no problem punishing these people by killing them mercilessly. He also views these same kind of people as weak that do not deserve any kind of recognition. While he expresses care for Tsuare, he would ultimately rather protect Nazarick than be with her. This is shown when he intended to kill her with full force when Pandora's Actor (as Ainz), Cocytus and Demiurge tested him to see if he was still loyal.

Sebas' view on humanity contrasts and his otherwise protective nature towards them contrasts greatly to that of the general view of Nazarick, which either do not care or outright hate humanity as a whole. It's for this reason that many of Nazarick's citizens find his goodness to be confusing, including the Pleiades that serve under him, with some even believing he may brainwashed of sorts. Sebas himself is even aware of this and questions this very nature of his, though it is likely due to inheriting his creator's quality, as Touch Me was one of the few individuals within the guild that was genuinely seen as good. Nonetheless, he continues to prove from time to time that his loyalty lies with Ainz and Nazarick.

Because of their conflicting beliefs, Sebas and Demiurge do not get along and often bicker back at each other, which was a common thing between Touch Me and Ulbert Alain Odle, as the two would often argue.

While he is not one of the Floor Guardians, Sebas's strength is said to be so powerful that it rivals with them. In his true form, it said that he is capable of overwhelming both Albedo and Cocytus. He has not displayed any sort of magic abilities, but his natural skill and talents make up for it. 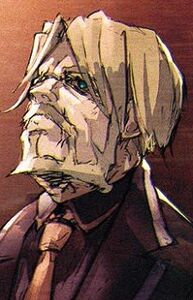 Sebas depicted in the anime. 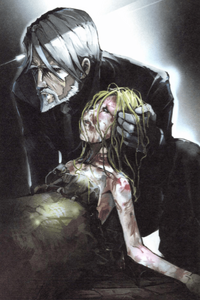 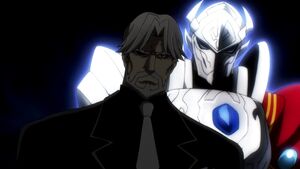 Sebas and Touch Me. 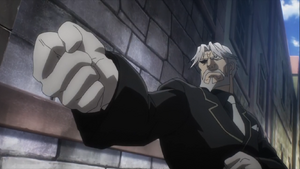 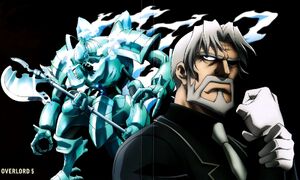