Influence over the CIA
Vast connections

Cover up his involvement in the Singapore disaster (both failed).
Warn player from Corvus (succeeded).

Sebastian Krueger is a major antagonist of the 2015 video game Call of Duty: Black Ops 3. He is the chief executive of Coalescence Corporation who is responsible for the illegal experiments performed on test subjects during the Direct Neural Interface trials, and the subsequent Singapore disaster caused by Corvus.

He was voiced by Robert Picardo, who also played Shadowman in the same game and Black Ops 4, Wayne Whittaker in Supernatural, and one of the pirates in The Pagemaster.

As chief executive of Coalescence Corporation, Krueger used his connections within the CIA to demand access to information on agents Jason Hudson, Frank Woods, Alex Mason and Joseph Bowman, and later on the Nova 6 project and the heads of the project. After receiving the information, Krueger was given Nova 6 assets by the CIA, and began testing the Direct Neural Interface, or DNI, a device invented by Coalescence that would allow people to interface with and use computers without having to physically come into contact with them.

To this end, Krueger illegally performed experiments on human subjects, with Yousef Salim acting as a therapist in order to ensure the subjects could withstand the pain brought on by the experimentation. However, ignoring Salim's warnings about the dangers of the project, Krueger inadvertently created the rouge AI Corvus during the course of his experiments, but still continued with the project, unaware that Corvus felt the suffering of all the human test subjects. As a result, Corvus released Krueger's Nova 6 assets into the atmosphere, killing 30, 000 people in what became known as the Singapore disaster. This killed everyone working on the project except Krueger and Salim, the latter of whom subsequently left the project. However, Krueger moved to a facility in Zurich, where he continued his experiments.

In 2064, a team of black ops agents lead by Dylan Stone were sent to investigate the Singapore facility, and discovered the truth about the disaster. As a result, they went rogue and attempted to defect to the Common Defense Pact, and Salim was killed by Stone. However, before they could kill Krueger, they were defeated by John Taylor and Jacob Hendricks, and Stone was killed by Hendricks before he could reveal Krueger's secret.

In the first mission of the game, "New World", Krueger is seen with Taylor discussing the surgical augmentation of the player to implant a DNI into their body. However, the surgery goes wrong and the player dies of surgical complications. Taylor then attempts to save them by using his DNI to interface with him, not realising that Corvus had previously infected the player's DNI, resulting in Corvus spreading to him and the player taking over Taylor's body, setting the events of the game in motion.

Krueger has a more substantial role in the mission "Life", in which Hendricks, whose body is now controlled by Corvus, figures out that Krueger was responsible for the Singapore disaster and launches a terror attack against the Zurich facility. After cornering Krueger, Hendricks holds him at gunpoint and berates him for refusing to stop the experiments even after the deaths of 30,000 people.

When Taylor, his body still controlled by the player, arrives, Hendricks takes Krueger hostage, and demands that he tell him "who we are" (referring to the dead test subjects, whose consciousnesses have been retained by Corvus and have entered Hendrick's DNI). When Krueger says he can't answer, Hendricks replies that he will find out for himself and shoots Krueger through the back, being shot and killed by Taylor/the player immediately after.

Krueger's consciousness is retained by Corvus, who brings him to the Frozen Forest, a neurological landscape that Salim created to simulate life after death and distract the test subjects from their pain. Corvus chains Krueger up, and questions him on its purpose. After Krueger explains Corvus's creation, he calls Corvus a "mistake". This angers Corvus, who tears off his limbs, erasing Krueger's consciousness from the Frozen Forest and killing him for good. 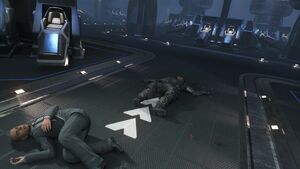 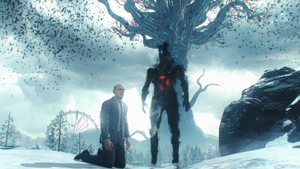 Krueger with Corvus in the Frozen Forest. 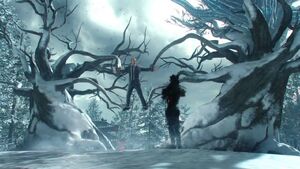 Krueger chained to the trees.