NOTE: This article is about the incarnation of Sebastian Shaw from the X-Men film series. The mainstream version can be found here: Sebastian Shaw.

Leader of the Hellfire Club

Ignite World War III between the United States America and the Sovient Union in order to rule the world (failed).

Manipulate and corrupt Magneto into becoming a mutant supremacist, much like himself (succeeded).

Sebastian Shaw, also known as Klaus Schmidt, is one of the two overarching antagonists (alongside Apocalypse) of the X-Men film series, serving as the main antagonist of the 2011 superhero movie X-Men: First Class and its tie-in comic The High Hand.

He is a merciless mutant German scientist who worked for the Nazis during World War II, later becoming the leader of the Hellfire Club. He wanted to provoke World War III between the United States of America and the Soviet Union in order to conquer the former, and to kill the X-Men Team, but his plans were foiled. He is partially responsible for shaping Magneto into the mutant supremacist he later became.

He was portrayed by Kevin Bacon, who also played Wade in The River Wild, Sean Nokes in Sleepers, Ray Duquette in Wild Things, Martin Thiel in Criminal Law, Sebastian Caine in Hollow Man, Joe Hickey in Trapped, Jacques in Super and Bobby Hayes in R.I.P.D.

Sebastian Shaw (under the alias Dr. Klaus Schmidt) was a scientist working for the Nazis during WWII. He was present in the concentration camp where a young Erik Lehnsherr's mutant powers first manifested, witnessing him open a gate with his mutant power from a window. Shaw attempted to coax the boy with chocolate into consciously using his ability but to no avail, with Erik claiming that he wanted to see his mother: Shaw did as requested.

However, he threatened his mother's life if he did not move a small silver coin by the time he counted to three. When Erik failed to do so, Shaw shot his mother dead. This enraged him greatly, causing him to lash out with his powers to Shaw's delight, killing two guards and devastating the metal components of two separate rooms. He then congratulated the traumatized young mutant. For the next eighteen years or so, Shaw tortured young Erik, attempting to see his powers in action again.

18 years later, Sebastian emerged as the leader of the Hellfire Club, a group of mutants with aspirations of world domination. He was observed in Las Vegas by CIA Agent Moira MacTaggert meeting with U.S. Army Colonel Hendry (previously lured in by Emma Frost, under the influence that she was a stripper) where he threatens him into supporting the building of American missile sites in Turkey, near the Russian border. When MacTaggert witnesses Shaw's henchmen Azazel (who can teleport) and Riptide (who can create tornadoes by spinning his body) using their powers, she attempts to warn her superiors; but Shaw has Azazel teleport Hendry to a Joint Chiefs meeting where he voices his support of the plan.

Later, when Hendry comes to Sebastian's yacht to collect his payment, he attempts to have him killed. But the Colonel pulls out a grenade and threatens to blow them all up if they refuse to let him go. Shaw orders him to pull the pin on the grenade before he plucks the explosive from his hand and triggers it himself, displaying his mutant power by absorbing the energy from the explosion. In response to Hendry's reaction that he was a mutant, he releases the energy at Hendry, killing him instantly.

That night, a now adult and vengeful Erik Lehnsherr, who had been hunting Shaw, sneaks aboard the yacht and attempts to murder the man who'd tortured him; only to be overwhelmed by Emma Frost's telepathy. At the same time, the U.S. Coast Guard arrived along with MacTaggert and mutant telepath Charles Xavier to apprehend him. Frost used her powers to shield Shaw from him and they all made their way to their submarine and narrowly escaped capture.

On their way to meet with a Soviet general, Frost senses Xavier's enhanced telepathy (through use of Cerebro) and informs Sebastian that he is recruiting his own team of mutants, consisting of Dr. Hank McCoy, Angel Salvadore, Sean Cassidy, Alex Summers, Raven Darkholme and Armando Muñoz. Shaw reveals a helmet he had built by the Russians that shields him from telepathic influence and orders her to meet with the general in his place.

Attack on the Division X Facility

Shaw, Azazel and Riptide, in an attempt to kill Xavier attack the Division X facility. While Azazel and Riptide were slaughtering the CIA agents, Shaw entered through the entrance and demanded the location of Xavier's mutant entourage, threatening the life of a CIA agent. Multiple guards arrived and attempted to kill Shaw, but he absorbed the bullets and a rocket from an RPG and killed the surrounding guards with the released energy.

Shaw located the mutants and introduced himself to them, offering them a chance to join him in his plans for mutant mobocracy. He had convinced Angel Salvadore and Darwin to join his team, but unaware to Shaw, Darwin used the opportunity to attack Shaw. He absorbed one of Summers' energy rings and placed it inside Darwin. Shaw, Angel, Riptide and Azazel teleported away from the following explosion which killed Darwin.

Shaw proceeds to Russia, where he meets with the Soviet general he sent Frost to see during which she was captured by Lehnsherr and Xavier; forcing the man to send Soviet missiles to Cuba. It is his plan to goad the U.S. and Soviet Union to use nuclear weapons on each other, causing WWIII which will cripple human civilization and allow mutants to rise up and rule. He accompanies the Russian fleet in his submarine to assure that the missiles reach their destination, but he is tracked by Xavier and his team.

Lensherr uses his powers to lift the sub from the water before they both crash on a nearby beach. Shaw attempts to absorb the energy from the sub's nuclear reactor (becoming a human atom bomb) but is foiled by Lensherr. The two fight and Sebastian has the upper hand, until Erik manages to remove his helmet allowing Xavier to mentally freeze his body.

Lensherr then takes Shaw's helmet for himself, which prevents Xavier from stopping him. Lensherr tells the frozen Shaw that he agrees with him that mutants are the future, but he refuses to forgive Shaw for killing his mother. With the same three second count Shaw gave him, he uses his ability to force the Nazi coin he still kept from his childhood (unforgiving of him killing his mother) and pierced it through Shaw's brain, killing him, avenging his mother's death as well as the humans and the mutants he killed. His body was then used by Erik as a dummy, as a means of showing he was now in charge to Shaw's former comrades.

Shaw is a cold, heartless mutant who has no empathy towards the deaths of others. His only concern is to bring mutantkind to the top of the world by any means necessary. This involved killing Erik Lensherr's mother to force Erik to move a coin and manipulating a new world war, regardless of the deaths of others. He is also a skilled manipulator and blackmailer, as he is able to convince Angel Salvadore to join his cause and blackmail Colonel Hendry into supporting the construction of Turkish missiles. His longing for genocide makes him a monstrous foe. 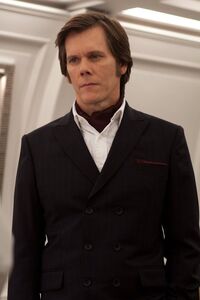 Shaw demonstrating his powers to Hendry

Shaw after containing the energy from a grenade blast, moments before killing Hendry.

Shaw is threatened by an adult Erik Lehnsherr.

Shaw puts on his helmet.

Shaw kills Darwin by making him swallow one of Havok's energy discs.

Erik Lehnsherr embeds a coin in a mentally frozen Shaw's brain, killing him.