Manipulating others to his control.

Create a Sanguine Star (Philosopher's Stone) to establish himself as a power (failed).

In the film Fullmetal Alchemist: The Sacred Star of Milos, the Elric Brothers pursue a mysterious prisoner named Melvin Voyager that makes his way to Table City at the edge of Amestris. Over the course of the film, he is revealed to be Security Chief Atlas.

As a member of the Cretan military, Atlas and his associate Raul were hired in order to protect the Crichton family from the Milosians that threatened the alchemists. One fateful night, Julia and her elder brother Ashleigh's parents were attacked and murdered with Ashleigh being injured in the riot. During this time, Atlas had attacked and stripped Ashleigh's face and a portion of his skin bearing the tattoo of half the Milosian ruins, as per the Crichtons' research. With this, Atlas went on for years into obscurity, until his eventual arrest in Central.

He was voiced by Matthew Mercer.

Assuming the name of "Melvin Voyager", Atlas resided in Central prison for 4.5 years of a five-year sentence, busting himself out upon seeing a newspaper article about the arrest of Julia Crichton for her attempts at entering Amestris illegally. He confronts the Elrics with ice-based alchemy that they find unusual. En route to Table City, the Elrics confront Atlas/Voyager once again aboard the train when a werewolf chimera does battle with them. Atlas/Voyager manages to escape and makes his way to the Table City prison where he frees Julia in the destruction. The Elrics confront him once more, leading Atlas/Voyager to pursue Julia and Al as the two fall into the crack between Table City and Creta's border harboring the Milosians.

Among the Black Bat terrorists of the Milosians, Atlas pretends that he is Ashley Crichton in order to form an alliance with Julia and the Milosians. He manipulates Julia's familial fondness for Ashleigh in order to convince Julia to go along with his plot of creating a Sanguine Star (the Milosian term for the Philosopher's Stone) to give away for the Milosians to protect themselves, despite the Elrics' protests.

As their Second-in-Command, Atlas leads Julia, Black Bats leader Miranda, and associate Alan to Table City's Observation Tower where several communication tubes line the area within a cage-esque setup atop the tower. Atlas reveals his true intentions when he stabs Miranda and directs her blood to flow down the tube in order to begin the three-dimensional transmutation circle to create the Sanguine Star. While Alan, revealed to be Atlas' associate Raul, holds Julia back, Atlas reveals his true identity, saying that he had taken Ashley's face and tattoo.

True to form, Atlas then stabs Raul and directs his blood down another tube to add more sacrificial blood to the transmutation circle. In the process, several underground chamber floors open up, causing several of Table City's soldiers to fall to their deaths as more blood for the circle. He also tears Julia's shirt enough to reveal that she too bears a tattoo similar to the one on her brother's that is now large enough to overlap with his, now revealing that the two tattoos together create a map of the ruins. He then attempts to add Julia to be sacrificed, only to be stopped by Edward.

Running to the chamber beneath, Atlas attempts to claim the Sanguine Star as his own when he's confronted by Edward once more. Julia captures the Sanguine Star and swallows it against Edward's commands to throw it into the lava set off by the Sanguine Star's creation. When Julia goes down to stop the lava flow from killing the Milosians, Atlas pursues until he is caught off-guard by Colonel Herschel, a Cretan military official, and the true Ashleigh Crichton. Atlas meets his end when Ashley uses his alchemy to destroy Atlas' body.

Using alchemy based on the notes of the Crichton's' research, Atlas was able to create unusual transmutation circles atop his palms from his own blood. With this alchemy, Atlas used an attack that fired daggers of ice towards enemies and also created paths of ice with which he could ascend and traverse differing terrains and situations. He also demonstrated proficient fighting abilities as well, like his battle with the werewolf chimera working for Ashleigh. 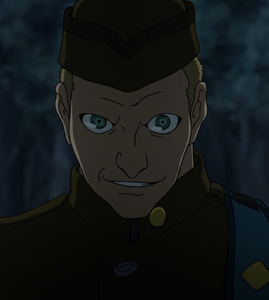 Atlas in the past 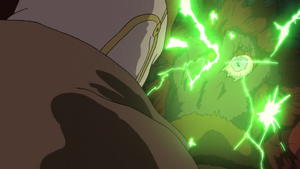 Atlas' death
Add a photo to this gallery

Retrieved from "https://villains.fandom.com/wiki/Security_Chief_Atlas?oldid=4110818"
Community content is available under CC-BY-SA unless otherwise noted.