Mechanically Modified Fighter
See-More is a member of the H.I.V.E. Five and a major antagonist in Teen TItans Go!. He is a cycloptic metahuman, who wears a robotic helmet that gives his eye the power to shoot lasers, see things from far away, and even inflate into a balloon, so he can fly.

See-More first appeared in "Super Robin", where he and the rest of the H.I.V.E. robbed a bank. See-More was the getaway driver. He used his supersonic eye to spot the Titans approaching and he warned Jinx that they've got "company". In the battlefield, See-More fought Raven and blasted her with his laser eye, only for Raven to use her first of darkness to slam him against a brick wall.

In "Artful Dodgers", See-More synched up Gizmo's time bomb with his eye helmet, by using the helmet as a timer. His eye displayed the numbers as they ticked down. The Teen Titans later defeated the H.I.V.E. and Starfire defused the bomb by cracking the screen on See-More's eye.

When playing dodgeball, The H.I.V.E. Five became a team called The H.I.V.E. Fivers, wherein the only three members to actually get the chance to play were Jinx, Gizmo, and Mammoth, while See-More and Billy Numerous got benched the whole time.

The H.I.V.E. Five would later rob another bank and when the Titans declared a dodgeball rematch with the H.I.V.E., the H.I.V.E. defeated them easily and got away with the stolen money, with See-More once again, being their getaway driver.

In "Sidekicked", See-More used his eye to spot the Teen Titans, coming in a batmobile. Alarmed, and believing this to be the real Batman, See-More warned the others. In battle, Raven swarmed him with bats, but Robin confiscated them, allowing for See-More to use his laser eye to create a ball of laser power, to trap Raven inside. Later, Robin used smoke bombs on him so that his vision would be obscured. This allowed Robin to punch See-More in the eye with some brass knuckles, shattering his eye screen and painfully knocking him out cold.

In "No Powers", See-More was attacked by a feral cat, thrown at him by Beast Boy.

In "Power Moves", See-More faced off against Cyborg and Beast Boy. Beast Boy turned into a squid and Cyborg squeezed him and fires ink at See-More like a gun, shooting him right in the eye and blinding him.

In "The H.I.V.E. Five", See-More took a break from doing evil and worked at his second job as a caricature artist on the docks, drawing people. Cyborg came up and placed a very tall order with See-More, also acting very rude and demanding the whole time. See-More was annoyed and overwhelmed with all the annoying orders that Cyborg was giving him but was eventually able to muster a decent looking picture of him. Cyborg hated the picture and refused payment. He even announced to everyone else, warning them not to spend their money at See-More's caricature drawing place, drawing customers away and ruining See-More's business.

In "Costume Contest", See-More was seen without his helmet for the first time. He had a big green cycloptic eye, blonde hair, and a scrunched up nose.

See-More is a teenage boy with a teal green helmet that has one lighter glass eye in the middle. He wears a white jumpsuit with a picture, resembling his green eye on it. He also wears gloves in the same color as his helmet and with rims that are a lighter, more lime shade of green.

When See-More is not wearing his helmet, he is shown to have one eye on his actual body. His eye is green and he has a scrunched up nose.

See-More is a villainous, cycloptic, teenage boy with a thirst for destruction. He spends most of his time wrecking the city with the rest of his team for no apparent reason. See-More is kind of a jive-talker, as his speech is peppered with a lot of slang, intentional grammatical errors, and a mild undertone of a 70's disco dude. Outside of being evil, See-More has an artistic passion and he loves drawing caricatures of people on the docks, which he does for money of somewhat of a second business.

Alone, See-More doesn't have any superhuman attributes, aside from his one eye, which doesn't give him any powers on its own. However, he has a robotic helmet, specifically designed to be worn by him. When he dons it, he can use his eye to power a robotic eye on the helmet and use it to do a bunch of different things. 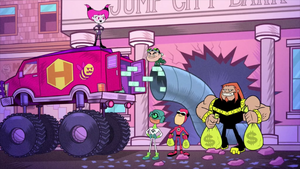 See-More robbing a bank with the rest of the H.I.V.E. 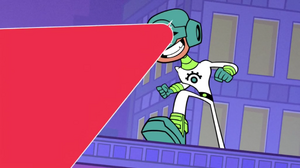 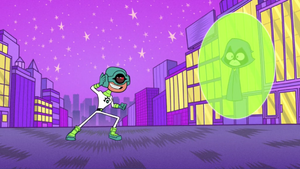 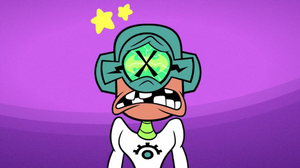 See-More getting punched in the eye by Robin 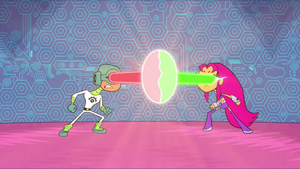 See-More and Starfire using their laser eyes on each other 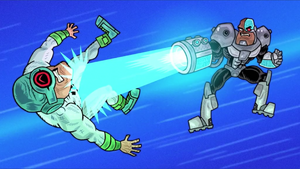 See-More getting attacked by Cyborg in a serious manner 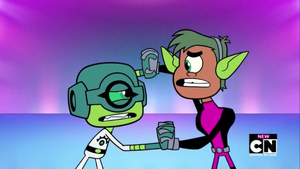 See-More fighting with Beast Boy (Note: This is the first time See-More was seen without his helmet)] 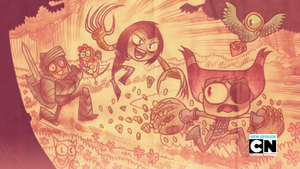