Seers are small Grimm resembling jellyfish that possess the ability to communicate with other Grimm.

Like other Grimm, Seers were created by the God of Darkness in an attempt to rid the world of life, and remained even after he and the God of Light abandoned Remnant. They later fell under the control of Salem.

In "Gravity", James Ironwood is shocked to find a Seer inside Atlas. He captures it and brings it to his office, where an argument breaks out between him and Team RWBY about Yang and Blake lying to him about divulging sensitive information to outlaw Robyn Hill. The strong emotions of anger allow the Seer to break free before falling to the ground and projecting the image of Salem, who reveals that she is personally on her way to destroy Atlas.

Seers hover over the ground and are able to communicate and oversee Grimm activity. They can also be used as messengers, transferring video and sound like cameras to other Seers, causing them to be used for communication. They also have spear-like blades on the ends of their tentacles, which can be used for combat. Additionally, they can project smoke-like images of others, specifically Salem, for communication to groups. 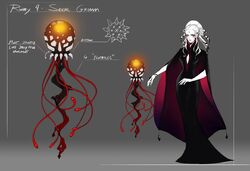