Working in the Office (formerly)

Eliminate the presence of ghouls in Japan (formerly).

Seidou Takizawa (in Japanese: 滝澤 政道, Takizawa Seidō) is a character from the manga and anime series Tokyo Ghoul, starting out in the first series as a protagonist before becoming a major antagonist in the first half of the sequel, Tokyo Ghoul:re. He is former Rank 2 Ghoul Investigator that worked in the CCG's main office as a human. After the Raid on the 20th Ward, he is captured and transformed into a bloodthirsty ghoul by the ghoul supremacist organisation, Aogiri Tree. He becomes a supporting anti-hero in the second half of :re after joining Ken Kaneki's organisation, Goat.

He was voiced by Shinnosuke Tachibana in Japanese and Micah Solusod in English.

During his childhood, he was an average child and lived a normal life. Sometime during his youth however, a ghoul had killed his elderly neighbor and it had shocked her mother. He decided to then enlist in the academy and joined the C.C.G. to help stop further killings being commited by ghouls. He knew Akira Mado when he ranked third to her.

Events of the First Series

Seidou first appears when he and two other fellow investigators, Kousuke Houji and Yukinori Shinohara, are being deployed to the 20th Ward by the CCG's Main Headquarters to help deal with the situation of stand-alone ghouls who are active in the 20th Ward. The reason for the deployment was so the CCG's 20th Ward Division would become safer after the 11th Ward Division had become powerless and was overthrown by the Aogiri Tree. He is then introduced to Juuzou Suzuya but quickly becomes annoyed with him due to his rather childish and immature behavior. He then gets infuriated when he finds out that Juuzou was assigned to the 11th Ward Special Countermeasures Unit and is lower-ranking than he is causing him to get upset.

He's then seen congratulating Koutarou Amon after he was promoted to first-class investigator but he gets in a sour mood when Juuzou got the same promotion. He ignores him but after Akira Mado gets transferred over to his department, he gets even worse. Due to their rivalry in the past back at school, he is immediately not pleased with his new office partner and after she interrupts him and corrects him on his reports of research, he gets so mad that others start to worry about him until he gets better by sitiing down and talking with Hide at lunch in the cafeteria. During the Anteiku Raid, he's having dinner with his family prior to the raid and once the raid begins he's assigned to Squad 1 which is under Akira's command. He confronts many ghouls and he tries to save Amon which he does, but he is soon ambushed by a squad of Aogiri soldiers led by Tatara and he tries to fight them off.

While fighting, Tatara sees Seidou's Douhi and since it is made from the kagune of one of his lost friends back in China, he gets enraged and throws him into the air. This gives enough time for Noro to completely cut off his left arm. He then falls onto the ground and loses consciousness. He's soon declared dead but he is rescued by Kanou and with his newfound ghoul investigators, he quickly begins to experiment on them. Seidou is then officially turned into an artificial one-eyed ghoul and defects from the CCG and joins the Aogiri Tree.

Taizawa reappears as a one-eyed ghoul at the ghoul auction, observing the battles that are occurring and claims that he's starving. He's then sent into the auction area to deal with the situation there and manages to attack and kill a small squadron of CCG Forces. Seidou then encountered Haise Sasaki and the Quinx Squad, engaging all of them. Sasaki fights him but Seidou overpowers him and begins to torture him until Hinami hears Kaneki over the intercoms. Hinami rushes in and saves Kaneki and briefly overpowers Seidou but he quickly begins to take her down and brutally injures her. Sasaki gets up and impales him with his kagune and soon, Arima and Squad 0 arrive and Seidou is forced to retreat alongside the rest of Aogiri.

Seidou is later seen taunting Ayato Kirishima for wanting to rescue Hinami from Cochlea after she was arrested during the auction raid. Later on, during the CCG's Rushima invasion, Seidou attacks investigator Chuu Hachikawa and kills him. As the squad led by Houji arrive at Rushima's base to confront Tatara, Seidou swoops down and interrupts, fighting against Tatara as revenge for when he captured him in the first series. Tatara attempts to kill Seidou by burning him, but fails. Seidou eventually gains the upper hand and finishes Tatara off by impaling him with his massive kagune. As Tatara slumps to the ground dead, Seidou turns to Houji and his squad, hoping to be accepted and acknowledged for what he's done. Instead, however, Houji solemnly orders his troops to execute Seidou, much to his great dismay. Angered, Seidou butchers all of the troops and beheads Houji, before fighting against Akira.

As Seidou is about to kill her, his arm is sliced off by a then-presumed-missing Amon. Seidou cackles at his attempt and fights against both him and Akira, until Quinx Squad member Mutsuki enters the fray. Mutsuki stabs Seidou, who uses this to pull him closer and stab him back, taking the moment to laugh at his opponents expression. Mutsuki spits blood into Seidou's eyes and kicks him in the groin and pinned him down, preparing to finish him off. However, Akira protects Seidou and confesses her true feelings toward him, along with Amon. Seidou pleaded Akira to stop shielding him in grief. He is changed by this act of care and leaves Rushima alongside the CCG. He expresses concern for Akira's physical conditon from the stabbing and remains by her side. He fires back at the Clown ghoul Nico when he suggest getting her treated by Dr. Kanou, whom Seidou was tortured by between the series. Seidou later joined Kaneki's new organisation Goat in an effort to atone for what he had done.

As a human, Seidou looked like an average young man with short brown hair, parted bangs, and brown eyes. He wore a dark blue suit when working in the main office with a blue tie and a white undercoat as well. In combat he had standard issue CCG Soldier and Military gear and armor with him.

As a ghoul, he has drastically changed. His hair is now white and has grown past his chin and is also very messy. He dresses entirely in black wearing a dark black robe over him convering everything except his face, hands, and feet. He wears sandals and has black fingernails and lips. He also has dark circles around his eyes and his left eye is blakc for his kakugan. His kakuja mask is at first an incomplete version of an owl's face and the second one being a gigantic beast-like head.

As a human, Seidou had a straightforward personality. He was responsible and respected and looked up to his superiors. He took his job very seriously and was annoyed at Juuzou for his unruly behavior. He gets very mean-spirited and jealous after Akira Mado shows up and starts to out-perform him when looking up information about Aogiri. He was once easily jealous and was willing to do whatever it takes to appear as if he were the best.

After the became a ghoul, he changed dramatically. He had embraced his new dark side and was a complete ghoul. He has become more psychotic as he has no regard for human life and takes pleasure in brutally killing his victims. He no longer cares for humans and simply murders them and even picks off his former teammates' heads as if they were fruit in his eyes. He is mentally unstable and wants nothing more but to kill and slaughter all of the humans as he has embraced his ghoul side.

Like all ghouls, he can be weaker if enough Q-Bullets are used against him and can be easily weakened by human food. Due to the organs from Yoshimura, who was a very powerful ghoul, it is unknown if he even has the same weaknesses of a ghoul. 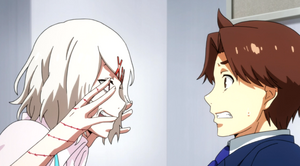 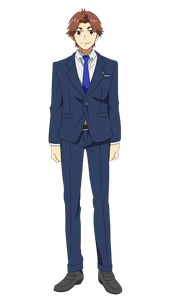 Seidou when he was human. 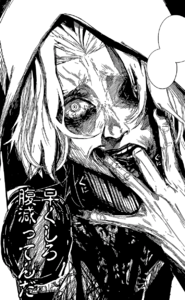 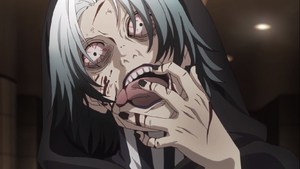 Seidou returns as a ghoul in the anime 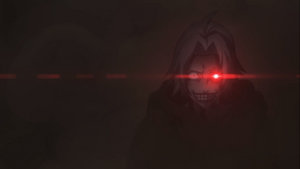 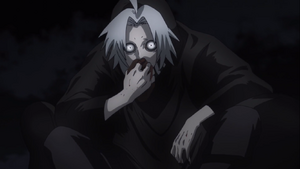 Seidou perched atop a tower.
Add a photo to this gallery

Retrieved from "https://villains.fandom.com/wiki/Seidou_Takizawa?oldid=3458014"
Community content is available under CC-BY-SA unless otherwise noted.