Founder and leader of the Disciplinary Committee

Seifer Almasy is the rival of Squall Leonhart and the secondary antagonist in Final Fantasy VIII. He is a very selfish person who was turned to the dark side by Sorceress Ultimecia. He is usually accompanied by his two followers and loyal friends named Fujin and Raijin.

A younger looking version of him shows up in the Kingdom Hearts series, where he is a bully in Twilight Town. Roxas defeats him in a battle.

Seifer has short blond hair, blue-green eyes, and a scar across his forehead and nose received from Squall as retaliation during a duel. Seifer wears a blue vest, with a cross design lined in white, a gray coat with an emblem resembling the symbol of the Cross of Saint James on the sleeves, black gloves and boots and a silver chain with a tag. The cross is Seifer's symbol as much as the angel wings are Rinoa's and the Griever is Squall's.

As Squall's rival, Seifer's appearance is directly opposite in many ways. His hair color is light, as opposed to Squall's brown. His chin is square whereas Squall's is oval. The color scheme of their clothing is opposite, as well as their coat lengths. Even though they both use a gunblade, their fighting styles are different, with Squall wielding his with two hands, whereas Seifer uses his with one. Seifer's friends, Raijin and Fujin, call themselves a "posse", whereas Squall is a loner.

Seifer is famous around Balamb Garden for being skillful in battle, but his stubborn, arrogant, reckless, and unpredictable nature has kept him from completing the SeeD exam. Aside from Squall, Seifer is the only gunblade specialist in the Garden.

There are many parallels between Seifer and Squall. Even though they are rivals, always battling to prove their superiority, they have an unspoken respect for each other's prowess. Both have a facial scar inflicted during their duel in the game's opening sequence; the scars are mirror images of each other, with Seifer's pointing up-left (from his point of view) while Squall's points up-right. Seifer is a stubborn, hubristic, loud and outspoken rebel, while Squall is a silent, strict follower of duty. Both are nigh-equally skilled in using the gunblade, but Seifer's temper often leaves him losing to Squall. Seifer's Triple Triad card is a mirror of Squall's, both having the same numbers.

Although he is belligerent and rude, Seifer is troubled rather than bad. He is twisted by the power of the Sorceress of the Future herself, and pursues a warped version of his dream, although the degree to which he is controlled or influenced by her power is left ambiguous.

Seifer was born 18 years prior to the events of Final Fantasy VIII. He was orphaned in the Sorceress War and sent to Edea's Orphanage. From a young age, he bullied the other children in the orphanage, especially Zell. He became a student at Balamb Garden, where he studied to become a SeeD. Seifer would later forget his past in the orphanage due to the memory loss using Guardian Forces causes.

Final Fantasy VIII Ultimania reveals that when Seifer was a child, a popular movie was released about a sorceress who defends her country, and her knight who protects her. The film was Seifer's favorite, and inspired his dream to become a Sorceress Knight himself, copying the battle pose of the actor Laguna Loire who played the knight in the film.

At Balamb Garden, Seifer would form the Balamb Garden Disciplinary Committee with his friends Fujin and Raijin, abusing their power to give fellow students punishment and detention. Seifer became a rival to Squall Leonhart, who had coincidentally grown up in Edea's Orphanage, although neither remembers this. Of all the students at the Garden, only Seifer and Squall chose a gunblade as their specialized weapon, and it can be presumed the two would often duel to hone their skills.

Even though Seifer had great potential to become a SeeD, his behavior made him fail the exams, and he was labeled a "problem child". Seifer developed a "romantic dream" about becoming a Sorceress Knight and borrowed several books from the Balamb Garden library related to the subject. About a year before the events of Final Fantasy VIII, Seifer started a romantic relationship with Rinoa Heartilly, a girl working in a resistance group to free the occupied city-state of Timber.

At the beginning of Final Fantasy VIII, Seifer and Squall have a fierce duel in a rocky field near Balamb Garden. Seifer casts a Fire spell sending Squall to the ground and strikes at Squall's face, giving him a bloody scar. As Seifer lets his guard down Squall strikes back, leaving a mirrored scar on Seifer's face.

For the SeeD field examination, Squall and Zell Dincht with Seifer as their leader form Squad B in the military operation against the Galbadian Army. Selphie Tilmitt later joins the group, but because of Seifer's disobedience during engagement, he fails the SeeD exam and grudgingly applauds Squall, Zell and Selphie, all of whom pass.

While Seifer is sent to be disciplined for his actions during the exam, Squall, Zell and Selphie are assigned their first SeeD mission: to aid the rebel faction Forest Owls free the oppressed nation of Timber. Rinoa, Seifer's former love interest, is a member of said faction.

Having heard of this, Seifer breaks out of the discipline room, injuring many people in the process, and embarks to assist the Forest Owls by holding the President of Galbadia hostage during a broadcast from the Timber TV Station. Backed into a corner and watched on by Squall, Zell, Selphie and Quistis Trepe; Seifer's teacher who had been sent to retrieve him; Seifer is saved by Ultimecia who appears in the body of Edea Kramer. Appealing to Seifer's darker side, Ultimecia convinces him to follow her. Seifer is announced executed by the Galbadian government and a saddened Rinoa reveals her past with Seifer to Squall.

Seifer is believed to be dead until he shows up in Deling City, standing at the side of Sorceress Ultimecia having become her Sorceress Knight. Squall, with their new ally, Irvine Kinneas, had been assigned to assassinate the sorceress by shooting her, but Irvine, remembering his past at the orphanage, refuses to shoot Edea and disguises it as merely nerves.

When Squall came to Galbadia's D-District Prison, he is transported to the torture room by Seifer, who tortures Squall for the truth about SeeD. Edea while being possessed by Ultimecia, wants to know why the SeeD persecute sorceresses, but Squall, who knows SeeD only as a general mercenary force, does not understand the question. While Squall later escapes with his friends, Seifer, now head of the Galbadian Army, takes over control of Galbadia Garden under Ultimecia's orders. Enabling the Garden's mobile functions he embarks on the search for a girl named Ellone whom his sorceress wishes to find.

Galbadia Garden intercepts a similarly airborne Balamb Garden over the Centra continent near the ruins of Edea's Orphanage with Seifer as a commanding officer of Galbadia Garden launches a full assault on Balamb Garden. The Balamb students and SeeDs turn the battle and infiltrate Galbadia Garden, where Squall and his party confront Seifer, who is defeated and left unconscious and disgraced on the floor. Despite Seifer's efforts, Squall's party defeated Ultimecia within Edea's body, which results in the wicked Ultimecia leaving the kind Edea's body to possess Rinoa and ordering Seifer to raise the Lunatic Pandora from the sea.

Under Ultimecia's orders, Seifer embarks to resurrect the Esthar weapon Lunatic Pandora from the depths of the ocean. Restoring the device to active status, he directs the pillar to be placed upon Tears' Point, starting the Lunar Cry. Squall and his party invade the construct with an Estharian airship. The toils have taken their toll on Seifer at this point, as his hair is unkempt and his coat is blackened and falling apart. Fujin and Raijin, who up until now had followed Seifer loyally, beg him to stop and go back to being their friend.

Seifer claims it is too late to go back, and wishes them a good life. Before he fights Squall one last time, Squall asks him if he is still going to continue "with this knight thing" to which Seifer says he is retired from it. Seifer now considers himself a young revolutionary and says he is going to make it to the goal since he has come so far, with no interest in sharing it with Squall. If Squall has obtained Odin, Seifer bisects him when he is summoned in battle, and Gilgamesh takes his place, knocking Seifer down.

Despite his defeat, Seifer captures Rinoa and offers her to Ultimecia in the body of her new host, the mad Sorceress Adel, whom she had resurrected. Seifer flees the scene as Squall's party intervenes. After Ultimecia is bested inside Adel's body by Squall's group, she casts Time Compression, allowing Squall and his friends to reach her era and defeat her once and for all. Seifer returns to Balamb with Fujin and Raijin, where they spend a day fishing together. Raijin catches a fish, causing Seifer to throw down his fishing rod in frustration, and Fujin kicks Raijin into the sea. Seifer laughs before looking up at Balamb Garden with a smile as it flies past.

A younger version of Seifer first appeared in the videogame Kingdom Hearts II. He is the leader of the "Twilight Town Disciplinary Committee", together with Fuu and Rai, and he is idolized by Vivi for his strength. Seifer is known for being a top Struggle fighter, who also likes street brawls.

In DiZ's simulated Twilight Town, he is a rival of Roxas and his friends, while in the real Twilight Town, Hayner is his main rival since Roxas himself does not exist. He is antagonistic toward Sora, but after he saves Seifer's gang from the Nobodies, Seifer gives him the Struggle Trophy, an unspoken sign of respect. Although his rival Squall (under the name of Leon) appears in the series the two never meet, though they retain their trademark scars.

In Kingdom Hearts III, Seifer is said to have left on a warrior's journey with Fuu and Rai.

He was voiced by Will Friedle in English and by Takehito Koyasu in Japanese. 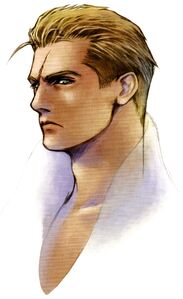 A closed-up view of Seifer Almasy.