Seiji Noumi, known as Dusk Taker in the Accelerated World, is a new student at Umesato Junior High School and is a member of the Kendo club. He is an antagonist in the manga and anime series, Accel World. In the anime series, he is voiced by Sanae Kobayashi in the original Japanese version who also voiced Allen Walker of D. Gray-Man and Amanda C. Miller in the English version.

Seiji has a medium stature, dark brown hair which he has in a bowl haircut and brownish gray eyes. As for his attire, he has been seen in Umesato's school uniform which consists of a white dress shirt with a light blue blazer on top and a green tie.

Dusk Taker has has a tall purple and black body with a red orb as his face. There are two similar orbs on each of his shoulders. His left hand is normally equipped with an Enhanced Armament that takes the form of triage of tentacles with the power to regenerate, which he apparently stole from another burst linker called "Starfish". His other hand is equipped with an Armament that looks like a giant metal claw that has extremely strong cutting power, and which he sometimes exchanges with for a large red flamethrower-esque cannon known as Pyro Dealer which is capable of firing great blasts of flames like a dragon, that can burn the stage ground into lava. However it was not stated who he stole either of these weapons from. Dusk Taker also has a pair of wings that look like torn bat or demons wings or dragon wings that he stole from Haruyuki's Duel Avatar, Silver Crow.

Seiji is a cold person, which stemmed from the bullying he received from his brother. He is a hardcore Brain Linker and is shown to be merciless as he even blackmails in the real world to make other players give him points and work as slaves for him. After losing Brain Burst, he has become more pleasant and a bit carefree. However, his sadistic nature did extend beyond the game, as he referenced after his in-game duel with Mayazumi that he used to torture pill-bugs as a child.

Seiji Noumi was first introduced to Brain Burst by his own bullying brother, Yuichi Noumi. Yuichi forced him to give Burst Points to him regularly, even costing his only friend. As Seiji got stronger, he eventually learned of the incarnate system. He then sadistically tore Yuichi apart in the Unlimited Field and killed him repeatedly until he lost all his points. He later joined the Acceleration Research Society.

Seiji arrived as a first year at Umesato Junior High School. What gave him away as a Burst Linker is when he soundly bested Takumu Mayuzumi in a kendo match. Taku theorized that Seiji used Physical Burst, which allows a Burst Linker to accelerate for three seconds at the cost of five Burst Points. The curious thing was that Seiji used a masking program to hide his name on the challenge list.

Haru began to tail Seiji but the latter was on to him and lured him into the girls' shower. The next day, he arranged a meeting with Haru, revealing that he had secretly placed cameras recording Haru entering the girls' shower. He then began to blackmail Haru, demanding that he give Burst Points every day if he doesn't want to be expelled. Chiyuri Kurashima then arrived, trying to cover for Haru, only for Seiji to reveal one of the cameras to the school. He then grabbed Chiyu, telling her to cooperate and root for him as he attempted a direct link with her. Haru then charged at him and they both used Physical Burst. But as this was Haru's first time using the command, he was beaten. Seiji then pinned the boy to the ground with his foot and direct linked with him as he challenges him to a match. He defeats him after using his special ability, "Demonic Command" to steal Haruyuki's ability to fly and rendering him powerless. He promised to return Haru's wings when he graduates, on the condition that he gives Burst Points every day.

The next day, as Seiji was taking a test, he was challenged to a match by Taku, who knew he would accelerate during the test and that he stole Haru's wings. Even at a disadvantage with his stolen abilities in the match setting, Seiji then demonstrated the power of the Incarnation System, enabling him to best Taku. Haru manages to trick Seiji into switching to Battle Royale mode so he can fight against him instead, managing to cut off one of his arms with his own incarnation attack. As Seiji activates Haru's wings and some pyro equipment, Haru equips the Gale Thruster he received from Sky Raker, allowing him to take to the skies and face Seiji head on and manages to beat him with assistance from Takumu. However, before Haru can finish him, Chiyu/Lime Bell appears and heals Seiji.

Afterwards, Seiji flaunts his ownership over Haru's wings and Chiyu's healing ability. This causes Haru to attack Seiji, but he is pushed back as Taku advances forward. Seiji quickly uses the Incarnate system to tear Taku to shreds, causing Chiyu to scream and Haru to become even more angry. In his anger, the Chrome Disaster Armor that attached onto Haru begins to entice Haru into brutally destroying Seiji. Haru eventually succumbs to the temptation and uses a darker version of his incarnate system to attack Seiji, screaming at Seiji to get out of his life and disappear. Eventually, Seiji has to use both hands powered by his incarnate system to hold Haru off, but just as Haru was getting the upperhand, the match timed out, causing all the players to go back to the real world.

Seiji soon leaked a rumor that Haru planted the camera in the girls' shower room, which led to him being questioned by a staff member and unjustly beaten up by a fellow student whose girlfriend was embarrassed by the revelation. Seiji stared at Haru in triumph as his rival ate his lunch without crying.

Over the next little while, Seiji, with Chiyu by his side, began to dominate the Suginami area, devastating entire opponents in the normal matches. It was his ambition to eventually become powerful enough to challenge Black Lotus and rule Suginami.

A few days later, Haru confronts Seiji in the same bush where he first challenged him. He reveals that he knows he's using an illegal brain implant chip to hide from the matching list and to cheat on school exams, only activating his Neuro Linker to challenge people, to Seiji's surprise. One scan and Seiji would be expelled, his implant chip forever deactivated.

Seeing that he knows his secret, Seiji offers a chance to end their feud once and for all by wagering all their Burst Points in the Unlimited Field in a Sudden Death Match.

However, Seiji was not seeking to fight fair. He enlisted the assistance of Black Vice, vice president of the Acceleration Research Society, to trap Haru while he engaged Taku. However, Taku revealed to mastered the incarnate system, turning his pile driver into a sword. They then dueled, eventually slashing off Seiji's left arm. Taku then observed that from his duel avatar's name, he can never truly own the things he steals, which is why he's left with nothing. Seiji simply laughed, revealing how came to possess Brain Burst and revenged himself upon his bullying older brother. He then manifested a new arm, which he used to constrict Chiyu and torture her, causing Taku to lose his will to fight. Seiji then proceeded to viciously attack Taku. His sadistic attack soon gave Haru the strength to break free of Vice's grip. But before Seiji could land the killing blow to Taku, his right arm is severed by Black Lotus, whose duel avatar had journeyed all the way from Okinawa. She held off Black Vice while Haru faced Dusk Taker for what may be the last time.

Seiji merely laughed at Haru and the thought that their bond of friendship could defeat him, promising to take his time with him just like he did his brother. Haru told him that his biggest mistake was not challenging normally him when they first met. If he had, Seiji would've gained what he wanted most: friendship. However, he is not seeking to befriend him, seeing that Seiji is beyond redemption. Silver Crow and Dusk Taker then engaged in an aerial battle. When it seemed like Haru was going to win, Chiyu suddenly used her healing ability on Seiji. The tide had turned and Seiji had Haru in his grasp. Then suddenly, his wings disappeared and were returned to Haru. As Seiji went into freefall, Haru used the combination of his wings, Laser Sword and Gale Thruster to deliver a crushing blow to his opponent. By then, all what remained of Dusk Taker was his upper torso, head and left tentacles. Chiyu reveals to Seiji that she's come to the revelation that her healing ability in fact reversing time on duel avatars, given that his equipment regenerated the first time she healed him. Thus, she pretended to join him long enough to level up her killer move to the point where it could reverse time to before Haru lost his wings.

Cursing the Nega Nebulous, Seiji vowed he shall leak their real identities and called on Vise to help him. Unfortunately, Vise was tied up holding off Black Lotus. Seiji demanded that he do something, threatening to expose the Research Group and the BIC. Vise reveals that the BIC will dissolve into the cerebrospinal fluid once it senses Brain Burst's uninstalling. Vise then vanished into the shadows.

Left with no allies, Seiji started pleading for his life. He attempted to bargain points and his service in their legion if they spare him, but his pleas fell on deaf ears. Growing frantic, Seiji tried crawling away, only to be sliced in half by Haru. Dusk Taker was then destroyed, once and for all.

The next day, Haru met Seiji at school, a much more pleasant person without Brain Burst, though he could not recall the game.

Dusk Taker only has one main ability, which comes into play when he can hold down an opponent and look them in the eyes. 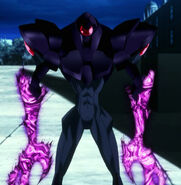 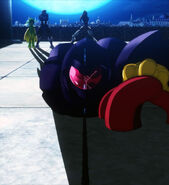 Retrieved from "https://villains.fandom.com/wiki/Seiji_Noumi?oldid=2239655"
Community content is available under CC-BY-SA unless otherwise noted.