No information
Seiryu is a member of the Four Saint Beasts and a villain in Yu Yu Hakusho.

He was voiced by Mitsuo Senda in the Japanese version, and by Justin Cook in the English dubbed version.

Seiryu is known as the Blue Dragon, however, he has more of a humanoid appearance to him with pale green skin. But he does have a dragon wrapped around his robe.

Seiryu is the third Saint Beast that Yusuke and his friends encountered. Just when Hiei and Seiryu were about to fight, an injured Byakko shows up and asked him for help. Seiryu refuses and kills Byakko. When Hiei and Seiryu fight each other, Seiryu manage to freeze both Hiei's legs, and one of his arms. It seemed that Hiei was about to lose, however Hiei revealed that he's a fire demon and that ice attacks had no effect toward him. He also manage to slash Seiryu 16 times in a second, which caused Seiryu to get sliced into pieces, killing him. In the manga however, Hiei kills him instantly after the fight begins. 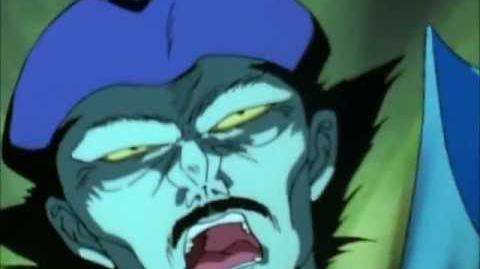 YYH - Hiei vs Seiryu HD
Hiei vs. Seiryu (HD)
Add a photo to this gallery

Retrieved from "https://villains.fandom.com/wiki/Seiryu?oldid=4087362"
Community content is available under CC-BY-SA unless otherwise noted.