Parasitic Pawn
Sekhmet is the name of the bloodthirsty cat-like skeleton parasite bonded to singer Eliza and a minor antagonist in Skullgirls.

Eliza has been the host to the skeletal Parasite Sekhmet for ages. Sekhmet is entirely internal and cannot be seen. However, that doesn't mean it still doesn't need to be fed. For years Eliza has always held charity blood drives, but what nobody knows is that the blood is to feed Sekhmet and preserve her beauty. Once the Medicis found out about all this, though, they blackmailed her into using her unusual, and bloody talents to retrieve the Skull Heart for them.

Her general lack of speed is balanced out by a second form of attack that allows Sekhmet to act alone, and make use of several perks that drain Eliza's meter over time. Sekhmet moves much faster in addition to having the ability to lunge, and posses an armor that prevents flinching while under attack for a certain number of hits. She will retreat when grabbed by the opponent or if Eliza's meter is empty, but can also be called back manually. Sehkmet is also unable to perform a Blockbuster alone if Eliza hasn't used her taunt move first. 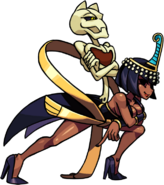 Sekhmet arising from the body of Eliza. 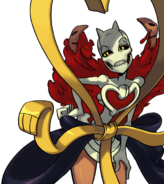 Sekhmet having the opportunity to speak, shedding the skin of his guest.

Sketches of Sekhmet's expressions.
Add a photo to this gallery

Retrieved from "https://villains.fandom.com/wiki/Sekhmet?oldid=3891760"
Community content is available under CC-BY-SA unless otherwise noted.