Member of the Lin Kuei Clan

Recruiting robots to his clan.

Take control of the world with his Tekunin Clan (failed).

Kill Sub-Zero (failed).
Unit the Cyber Ninjas into one being.
Claim the godlike power of Blaze.

Sektor is a Lin Kuei warrior transformed into a cyborg and an supporting antagonist from the Mortal Kombat series of fighting games. He is also one of the current Sub-Zero's most hated foes, and second arch-enemy.

Sektor volunteered to be transformed into a cyborg out of loyalty to the Lin Kuei after the clan made the decision to start doing this to their best warriors. Sektor was sent to hunt down and kill the rogue ninja, Sub-Zero, after he deserted the clan.

The cyborg attempted this twice, first during Emperor Shao Kahn's invasion and the second time during Lord Shinnok's attempt at power, but failed both times. Sektor was eventually left the only functioning cyborg after Smoke was captured and left in one of Shao Kahn's fortresses deactivated, and Cyrax became a member of the Outer World Investigation Agency after they restored his soul.

However, Sektor's programming had been corrupted by his constant battles with the forces of Outworld. He rebelled against the Lin Kuei Grandmaster and took control of the clan by killing him. With this done, Sektor proceeded to make plans to turn all of the Lin Kuei into cyborgs, but was stopped by Sub-Zero. The cyborg was defeated and forced to flee, but he formed his own clan of cyborg ninjas, called the Tekunin.

In the Konquest mode of Mortal Kombat: Armageddon, Sektor attacked and captured Taven in while he was in his father's temple. The cyborg brought him to his warship where he demanded the information about what Taven's father had told him in his message. However Sektor found his warship under attack by Sonya and her Special Forces, resulting in Taven getting free.

But before the demigod could escape the warship, the cyborg attacked him, saying that Taven wouldn't leave until he got all the information he needed. Sektor was beaten, but he apparently made it off of the warship. The cyborg planted a tracking device on him, which Sonya used to find Taven later.

In his ending, Sektor defeated Blaze, causing the power of the firespawn to surge through him. This caused his mind to link with that of Cyrax and Smoke and they joined together into an abomination of flesh and technology.

Sektor appears as one of the Kombatants fighting under Shang Tsung and later Shao Kahn.

Following Sub-Zero's death at the hands of Sindel and subsequent resurrection as a Revenant by Quan Chi and Shinnok, Sektor took control of the Lin Kuei, intending to turn the entire clan into cyborgs like himself and mold them into his own personal army. However, his ambitions were brought to an end by the return of Sub Zero, who had been freed from Quan Chi's control and returned to humanity thanks to the actions of Sonya Blade and Johnny Cage.

Sub Zero, with the help of Cyrax who is freed from Sektor's master control via stolen USB virus given from Kung Jin defeated Sektor and dismembered him, but chose to keep him alive in his disassembled state in order to study his cyberized memories. This allowed him to discover that, during the events of the previous game, Sektor had made a deal with Quan Chi: Quan Chi would exterminate the Shirai Ryu for Sektor, and in return, Sektor would pledge the Lin Kuei to Shinnok's service. However, Sektor refused to uphold his end of the deal, claiming that Quan Chi resurrecting Hanzo Hasashi as Scorpion violated the terms of their agreement. Sub Zero revealed this new information to Hanzo, who like him had been freed from Quan Chi's control and had discarded his old moniker of Scorpion. This finally brought an end to Hanzo's vendetta against the Lin Kuei, and directed his rage and vengeance against Quan Chi, the true source of his suffering. Whether or not Sub Zero chose to fully destroy Sektor after this is unknown.

Taking place during the near end of Mortal Kombat 2 tournament in Mortal Kombat (2011), the past iterations of Sektor and Cyrax are brought by Kronika to the future-present timeline. He is confronted by Frost, Kuai Liang’/Sub-Zero s former apprentice in the future-present timeline who now vow to help Sektor’s new era of the cyber Lin Kuei, granting her a second master control program as his successor during her transformation as a first ever female cyborg, allowing the master control program on the brainwashed cyborgs remained online, should Sektor die before her.

He and Frost, aided by their old Lin Kuei ally, the first Sub-Zero now a special revenant Noob Saibot Bi-Han , pull off their scheme by massacring Kuai Liang’s Lin Kuei, and using their hearts and brains to be implanted into cyborg bodies, brainwashing them, right before the future-present Scorpion (now return as a human) and Sub-Zero arrived too late. It is explained before the second tournament started in his timeline that Sektor ripped Cyrax's heart before forcefully automating him into a cyborg. While Sektor is elsewhere within a recently built Cyber Lin Kuei factory, he is alerted by Frost of Sub-Zero and Scorpion’s arrival, and Cyrax’s recovery of his human soul. He is presumably killed by either Scorpion or Sub-Zero, with the former opponent get his vengeance on Sektor for his involvement with Quan Chi or the original Shirai Ryu massacre. Though the mass production of cyber Lin Kuei is stopped by Cyrax’s sacrifice, shutting his system, Sektor’s body is quickly brought by his allies, where two iterations of Kano revives and upgrade him in return for Kronika offering them control over every market in the Realms.

He and Kano led Black Dragon and remaining Cyber Lin Kuei a raid on Special Force base, taking Sonya Blade of his timeline a hostage. As he and his timeline’s Kano are beaten by the future-present Johnny Cage, the future-present Kano manage to take Johnny’s past-self a hostage as well, leaving Sektor to a self-destruct alongside Cassie Cage, Jacqui Briggs, young Jax Briggs, and the older Johnny, until the past Raiden arrived on time to evacuate his surviving allies.

He represents the closest thing to evil a cyborg can be, and combines traits of both a stealthy ninja and a ruthless killing machine suitable for modern warfare. In contrast to his counterpart Cyrax, Sektor never concerned himself with regaining his human self, and may be unable to. As far as this could be said about a cybernetic organism, it is likely that he suffers from a form of insanity. Even in his human form, Sektor was utterly devoted to the Lin Kuei clan and, unlike Cyrax, Sub-Zero, and Smoke, never questioned nor resisted the Cyber Initiative, the idea of becoming golorified mechanical warriors. He is capable of independent thought and action as Cyrax and Smoke are; however, unlike the other two cyborg ninjas, the only emotions Sektor really exhibits are but rage and inhumanity. That said, he was one of few kombatants who thought Frost was worthy of leading the Lin Kuei Clan. However, he only took her in because of they both hated the current Sub-Zero. Sektor also shows little regard for any of his allies. He sees them as merely pawns to ensure that the Lin Keui continue to thrive. While this might appear noble to some, Sektor proves with his actions that he never cares about his clan; only his vision on how they should operate. He becomes easily angered whenever they fail, and for the most part, outright embraces being evil. This makes him as if not even worse than Frost as he is equally as self-serving on top of being even more ruthless.

Sektor has a number of special abilities thanks to his being a cyborg, such as enhanced strength and built in weaponry. This includes a series of missile launchers built into his chest and flamethrowers on each arm. He wields a set of energy swords called Pulse Blades and he wielded a Laser Pistol. While he perfers using his fists and feet, hs is skilled enough to hold his own against opponents who are also highly skilled with these types of weapons.

Sektor also can teleport, possesses a cloaking device, contains a compactor which is also hidden in his chest, which is powerful enough to crush a human being in a matter of seconds. Sektor also wields a device known as the Scarecrow, which can rip his opponent's body into six pieces, if Sektor tosses the device on his opponent's chest. Sektor is also a master in multiple martial arts including Ninjitsu, Sambo, and Kenpo. 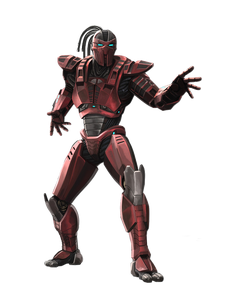 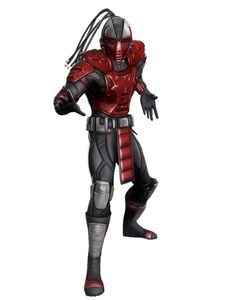 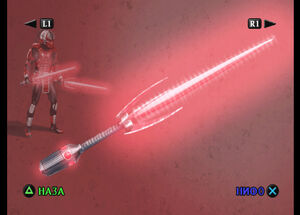 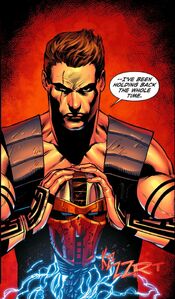 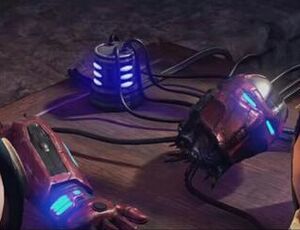 Young Sektor from original timeline brought into the future by Kronika in MK 11. 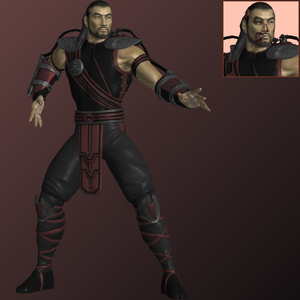 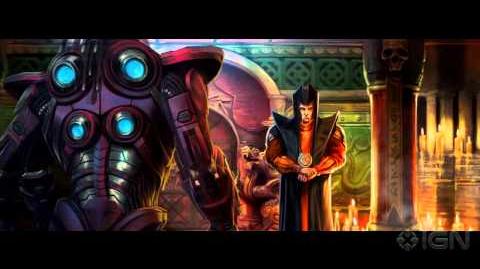 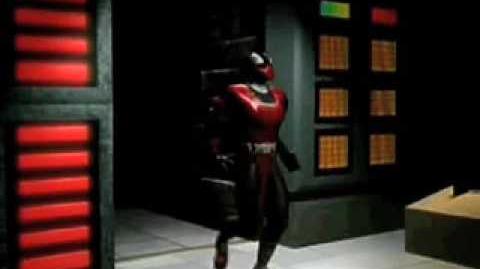 Retrieved from "https://villains.fandom.com/wiki/Sektor?oldid=3784681"
Community content is available under CC-BY-SA unless otherwise noted.