Member of the High Council of Argo (formerly)

Co-creator of the Worldkillers
Leader of the Children of Juru

Use Reign to cleanse Earth of its sin.

Terraform Earth into New Krypton and destroy humanity.
Kill Supergirl and anybody who stands in her way.
Establish her coven's beliefs as the new dominant Kryptonian religion (all failed).

Selena is the main antagonist of Season 3 of the TV series Supergirl. She is the high priestess of the Children of Juru and the creator of Reign and the Worldkillers, who guised herself as a loyal member of the High Council of Argo City under Alura Zor-El. She aims to terraform Earth into New Krypton and establish their beliefs as her people's dominant religion.

She was portrayed by Anjali Jay.

On Krypton, Selena was originally a member of the Children of Juru, a coven dedicated to creating "New Krypton" where the old polytheistic deities would be worshipped, including Yuda Kal who was replaced by the god Rao. For this purpose, the coven created three Worldkillers using advanced genetic engineering and dark magic, which would make them more powerful and invulnerable than regular Kryptonians. Selena eventually became the coven's new high priestess after her predecessor Jindah Kol Rozz was banished to the Phantom Zone prison Fort Rozz. During Krypton's destruction, the Worldkillers were sent away while Selena and a few surviving coven members resided on Argo City, waiting to awaken their creations on Earth so that their presence could rupture the Earth and terraform the planet into New Krypton.

In 2017, the Worldkiller Reign (who grew up as "Samantha Arias") stumbled across the Fortress of Sanctuary, where she activated a hologram projecting Selena. Selena would then explain Samantha's backstory and purpose to "execute justice" through excessive violence, horrifying Sam. Selena then coldly denounced the conception of her daughter Ruby as an error in regards to the manifestation of her powers, angering her. Despite Sam's objections, Selena told her that she would forget her daughter and not be bounded by other "mortal trappings", before activating Reign inside Sam. This caused Sam to forget anything in her trip up to that point.

Over the course of several weeks, Selena's hologram would guide Reign to brutally killing criminals, burning her house's insignia into a field for the whole world to see, trying to kill Supergirl to spread fear and then wiping out anyone who was a threat to their plans, including Jindah Kol Rozz to protect their secrets. She would also order Reign to find the other two Worldkillers Purity and Pestilence. After the three united, Selena had them perform a ritual that would destroy their human personalities, only for Purity and Pestilence to be killed and the Fortress destroyed. After Reign escaped upon absorbing the life essences of her "sisters", Selena sent her to kill Ruby in order to completely destroy Sam's persona. This failed after Reign was caught off-guard and locked up. Selena then decided at moment to travel to Earth with a piece of the Harun-El and forcibly separate Reign and Sam, knowing that the process would kill Sam.

When Supergirl required a special black rock called the Harun-El in order to defeat Reign and split her from Sam, she and Mon-El arrived on Argo City and met with her mother and high council so she could obtain it. At first, Selena showed reluctance in giving Kara the Harun-El while using the argument of Argo City's inhabitants' wellbeing in order to hide her true reasons. But then, after Supergirl gave her speech and how Earth desperately needed her help, Selena realized that Supergirl would be useful in saving her the trouble of splitting Reign and Sam, thus allowing her to proceed with her plans. To that end, she agreed with some of the councillors to give her the Harun-El. After Supergirl takes off in her ship with a small piece of the Harun-El, Selena watched her leave and head back to Earth. She then donned her black cloak and performs a ritual to summon Reign, allowing the Worldkiller to break out of the prison Lena Luthor built to contain her, knowing that Reign would "die" during the process and fool Supergirl into thinking that they'd won.

Ready to move onto the next phase of her plan, Selena and her sisters readied to use Alura Zor-El's incomplete portal to travel to Earth, knowing fully well that no ships was available. However, after Supergirl and Mon-El arrived at Argo to live there, Selena decided to ditch the plan and use their ship instead. Before leaving, she left a beacon set to detonate should Supergirl, Alura and Mon-El go through her quarters. Afterwards, she left one of her own to distract them while she took the Sword of Juru and led two fellow coven members (Ayala and Vita) to steal their ship and journeyed to Earth, stranding them and left unable to warn the D.E.O. due the dome preventing any form of communications.

Upon arriving on Earth, the three were met with Thomas Coville, who gave Selena a beacon to give rise to the Fortress of Sanctuary. Inside, the three reflected on the prophecy of the Worldkillers which had brought them to Earth and the fact that its' yellow sun granted them extraordinary powers. When they began the ritual to resurrect Reign, the Harun-El needed for the ritual had burned Ayala's hand since the planet's atmosphere made it toxic for them. Coville offered to act out the ritual for them and the ceremony progressed with Coville holding the Harun-El over the flames. However, they had noticed that Reign wasn't forming as she lacked the bloodline of her deceased sisters, which Selena had sensed were still existent. Coville directed them to the D.E.O., where they were storing Purity and Pestilence's blood.

The three Kryptonians attacks the D.E.O. HQ, demanding the blood samples. Alex Danvers shot an electrical net at the trio, trapping them until Selena used her heat vision to free themselves. She ordered Vita and Ayala to retrieve the samples. They then regrouped and killed agent Demos with their heat vision as he gave the samples to Supergirl. When Supergirl threw the samples at Selena, she had caught them just before the Girl of Steel could burn them mid-air. Vita then created a bright blink of light for them to escape.

Upon returning to the Fortress, Selena added the remaining blood of the fallen Worldkillers into the flame pit where the figure of lava began to take shape and moulded into Reign, successfully resurrecting her. As the Worldkiller stood up and grabbed the Sword of Juru, Selena greeted her as the one who made her. Selena then had Coville throw the Harun-El into the pit, which grew in size and created a portal into Earth's core so Reign could terraform the planet into New Krypton. Selena then concluded that they now had no need for Coville anymore, killing him with her heat vision. The three then watched Reign fly into the portal with the Sword to begin the terraforming. This immediately caused global earthquakes, tsunamis and tornados etc, aiming to destroy all life on Earth.

Some time later, the three began trying to create a hole for Reign to return. They fail to notice that Coville was still alive and tries to reach the ship they arrived on. Reign eventually returned and they rejoiced from the apparent victory, claiming how they will watch Earth burn and New Krypton rising. Just as they were about to throw in the Harun-El to activate the portal and complete the transition, they were stopped by a force-field and the team arrived. Selena fought Alura Zor-El who incapacitated her. After Reign's death, Selena and her allies were taken to Argo City to stand trial for their crimes. It is unknown what the result of Selena's trial was, but given what she had done, it either ended with life imprisonment or a death sentence. Regardless, her plans were foiled and all her actions in vain. 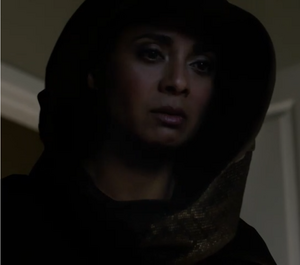 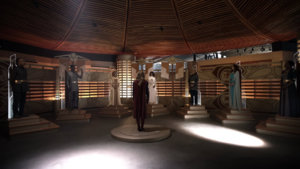 Selena (in white) alongside the High Council of Argo. 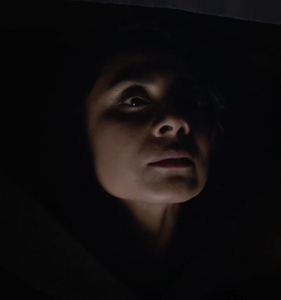 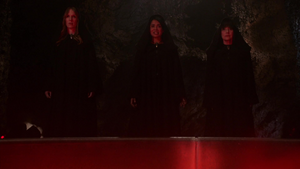 Selena and the other witches from the Children of Juru.