Draining the life force of living beings, opposing the X-Men

To attain godhood and force others to worship her

Selene Gallio is a centuries-old psychic vampire and a villainess from Marvel Comics. Also known as the Black Queen, Selene is a longtime member of the Hellfire Club, and as such has often tormented the X-Men and their allies. She is immortal and possesses great magical powers, her chief among them being the manipulation of shadows and darkness. She can also drain the life-force from any living being that comes in contact with her skin.

Selene Gallio was born 17,000 years ago in central Europe, "After the Oceans swallowed Atlantis" and "Before the rise of the sons of Aryas". Selene's mother was young when she bore her, but would be dead before Selene spoke her first words. The tribal elders ordered her mother's people to sacrifice themselves to Selene until none remained. They thus gave her sustenance and her name.

Selene was revealed to have been an old enemy of sorcerer Kulan Gath. Kulan Gath was active during the Hyborian Age (before any recorded civilizations) and is known to have faced both Conan the Barbarian and Red Sonja. In fact, Sonja reportedly managed to kill him and his spirit would not manifest again until the modern era. Thus, Selene was active at least as early as the Hyborian age.

Selene is assumed to have been wandering the world for millennia. She approaches Eliphas, a well respected senator whose wife had left him for a general named Mascius. Selene offers him immortality in exchange for helping her kill and absorb every soul in Rome. Eliphas goes about drawing pentagrams and performing rituals at several locations in the city, but warns a small girl to get her family out. The girl's father alerts the authorities and Eliphas and Selene are captured before the spell can be carried out. Just before they are burned at the stake, Selene kills the guards. She then curses Eliphas for his perceived betrayal with an eternal life of torture, turning him into a vampire-like creature. Eliphas is buried alive for 700 years until a farmer discovers him in his field.

In Nova Roma, Selene attempted to kill Amara Aquilla. She knocked Amara into a lava pool, thereby releasing her latent mutant powers, as Magma. Selene fought and defeated Magma, and plotted to turn Danielle Moonstar into a psychic vampire like herself and conquer the world. Selene fought the New Mutants, and was cast into lava and buried alive.

Selene directed her worshipers to undertake tasks that eventually allowed her to leave Nova Roma. In New York City, she nearly seduced and attacked the Juggernaut. She attacked Rachel Summers and fought the X-Men. Selene soon became the Black Queen of the Hellfire Club. She then overcame and destroyed her ancient enemy, Kulan Gath. She was later revealed to have been manipulating a power struggle within the Hellfire Club. After Selene left Nova Roma, the citizens regained their memories and sought to return to their previous lives. Later stories attempted to suggest Nova Roma had been an illusion, sustained by Selene, and later the mutant known as Empath. This was ultimately disproved by Magma, who discovered that the supposed revelation of Nova Roma being an illusion was a ploy to steal her away from her home and torment those who loved her.

It is possible that Selene was the one who made Magma think Nova Roma was not real. Of all the X-Men and their related teams, she possesses particular hatred for Magma and Rachel Summers. In particular, Rachel almost killed her once, before being stopped by Wolverine. She was seen during a membership change in the Hellfire Club, where she apparently has been kept prisoner beneath the building. However, she gained limited mobility from an alliance with Donald Pierce. She tried once again to take vengeance on Rachel, but was thwarted in this attempt as well. Selene remained trapped for a time beneath the Hellfire Club headquarters.

Selene was one of the few mutants to retain her powers after the events of M-Day. Selene, disguised as an old woman, befriends Wither and they live together in Mutant Town. She encourages him to use his powers and not be afraid of his natural gifts. She then asks him if he would use his powers to save his or her life. She had been killing a large number of people by draining the life out of them, and during her last feeding her disguise was spotted by a witness.

She reveals to Wither that Wallflower has died while he was away. Later she is attacked by the police and managed to kill two of them before being shot multiple times. Wither arrives and kills the other two officers, only for Selene to drop her disguise, telling him she is immortal and that they are two of a kind and should be together. She tells Wither that she will be his queen if he agrees, then kisses him, and he consents.

Selene's relationship with Eli Bard the rogue member of the Purifiers, is explained by Warpath to the other members of X-Force. It is revealed he had originally planned to sacrifice the Purifiers to Selene but changed his plans upon seeing Bastion reprogram an offspring of Magus. Using the Technarch transmode virus he re-animated the corpses in the burial grounds of the Apache tribe that he decimated decades earlier as well as Caliban and presented him to Selene for the purpose of finding other dead mutants and resurrecting them by the same means, so Bard can sacrifice them and their powers to her. Wither did not appear with her. There were, however, several figures standing behind Selene in the shadows, but it is unknown if he was among them.

One week before the event of Necrosha, Selene has the recently resurrected Destiny brought before her where she asks what her future holds. Selene returns to the place of her birth in central Europe, accompanied by new Inner Circle, consisting of Blink, Senyaka, Mortis, Wither, and Eli Bard. She sets her plan into motion of becoming a goddess with her Inner Circle; they go to the New York branch of the Hellfire Club where they slaughter every person there. She then targets others who, according to her, have failed her in her quest for godhood such as Sebastian Shaw, Donald Pierce, and Emma Frost (with whom she holds a particular grudge for having taken the "Black Queen" moniker when working for the Dark X-Men) as well as the X-Men because they got in her way and Magma. Caliban and Thunderbird then lead her to the ruins of Genosha where she claims this is where her journey will end and welcomes them to what she now dubs Necrosha.

While most of the resurrected mutants attack the X-Men and Utopia, Selene is seen with Eli Bard resurrecting the massacred residents of Genosha, with Cerebro detecting the rise of mutant numbers in millions. She is next seen with Warpath and an Unknown Female (Presumably Negasonic Teenage Warhead) discussing the fate of her pupils. As soon as that conversation ends, her Inner Circle returns with both the knife and Warpath in custody. Eli Bard proceeds to apologize to Selene for his betrayal those many years ago and proclaims his eternal love. Selene at first greets him endearingly, claiming that Eli was always her true love. She then stabs him in the stomach (to the delight of Wither), claiming that he was also her greatest disappointment. Once she has the dagger she gathers all her collected souls to attack X Force who are coming to stop her once and for all.

Whilst she has X Force occupied with the attacking dead she gathers her inner circle together to carry out the ritual which will finally make her the dark goddess she has always wanted to be. The ritual is a success and the collected souls seem to disintegrate and be attracted to a glowing blue/white light in the centre of Necrosha, presumably Selene herself. At the end of the issue it is confirmed by the escaped Warpath that she has finally became a god - probably because of the vast amount of souls which she has "reaped" - but it appears she is not invincible and Warpath knows a way to kill her. Performing an ancient Apache ritual, Warpath uses a sacred blade to kill Selene.

It was later revealed that sometime after her physical destruction, Selene's body and soul had been preserved as airborne particles and somehow stored in stasis in a vault located somewhere in New York City. Lady Deathstrike and the Enchantress gained access to the vault, and through the newly enhanced magic granted to her by the sentient virus, Arkea, she was able to fully restore Selene to physical life for the purpose of adding her to the newly-formed Sisterhood of Mutants.

Life-Force Absorption: by psionically draining the life forces of other human beings into herself, by physical touch. If she drained a person’s entire life force from him or her, the victim dies and the victim’s body crumbles into dust. It is unknown how often Selene must drain life force from another human in order to survive. It is known, that great expenditure of power causes Selene to age, but she can rejuvenate herself by absorbing more life force. Selene will not age as long as she maintains her supply of absorbed life force.

Physical Enhancement: Selene has physical strength, stamina, speed, and reaction time that are all several times greater than those of a normal woman.

Shadow-Morphing: allowing her to dematerialize or use solid tendrils of darkness to manipulate objects

Pyrokinesis: could psionically generate and project intense heat and flame from and around her body or direct it at certain distances. The exact radius remains unknown. She was also able to manipulate flame created from other sources and could magnify their intensity or snuff them. The flames Selene generated could also be illusory in effect; for example, she could focus the power on an object making it appear to be on fire while it was not being damaged by the flames at all. Selene instinctively created a psionic force field about her entire body that protected her from the effects of the heat and flame she created and from other sources as well

Telepathy: capable of displaying various psionic feats with the minds of others including reading and communicating with thoughts over vast distances.

Immortal: her aging process is greatly retarded and she can apparently regenerate injured or missing cells from even near-fatal injuries.

Sorcery: possesses considerable magical abilities, having gained a great deal of mystical knowledge over the millennia. The number of magical effects that she can create has yet to be cataloged, but it is known that she can cast and counteract spells and summon extra-dimensional demons.

Selene appears in the Wolverine and the X-Men series. She appears as a member of the Inner Circle of the Hellfire Club. Selene and the Hellfire Club end up fighting Cyclops in order to prevent him from disrupting a ritual that would transfer the Phoenix Force from Jean Grey into the Stepford Cuckoos. She uses her psychic vampirism on Cyclops. 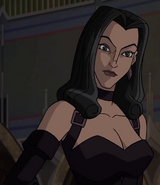 Selene unleashing her shadow powers
Add a photo to this gallery
Retrieved from "https://villains.fandom.com/wiki/Selene_Gallio?oldid=1458857"
Community content is available under CC-BY-SA unless otherwise noted.