Queen of Westeros (disputed), Lady of Dragonstone (lost the seat), Queen at the Wall, Lady of the Nightfort, Queen in the Narrow Sea (formerly)

Spreading the religion of R'hllor, sacrificing people to her god, pray

Obey to her god, serve her husband as Azor Ahai and king, rule Westeros, convert Westeros to the faith of R'hllor, end any other religion in Westeros, give a loyal army of wildlings to her husband, defeat the Others

Selyse is the daughter of the deceased Ser Ryam Florent and the older sister of Ser Imry and Ser Erren. She is the niece of Lord Alester Florent, the head of her family. In the TV series, Ser Axell Florent is her elder brother, while in the novels he's her uncle. 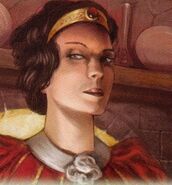 Retrieved from "https://villains.fandom.com/wiki/Selyse_Florent?oldid=1483560"
Community content is available under CC-BY-SA unless otherwise noted.