Travelling back in time to alter his own future.

Travel back in time and help his younger self gain wealth for his presidential campaign
Kill Max Walker and his family in the past (all failed).

Murder
Rewriting history for his own selfish gain

Senator Aaron McComb is the main antagonist in the 1994 film Timecop.

In the year 1994, McComb becomes an important figure in the Time Enforcement Commission (TEC), a system designed to prevent the misuse of the new discovery of time travel. However, McComb secretly uses his position to go back in time and alter his own future by helping his younger self to become rich and powerful for his presidential campaign. He kills anyone who opposes him and threatens to erase the existence of one of his associates, Lyle Atwood, if he testifies against him by murdering his entire family in the past. By the year 2004, another TEC agent named Max Walker, whose wife Melissa was killed by McComb's men in 1994, becomes determined to stop him. Walker, along with Sarah Fielding, a corrupt Internal Affairs agent travel back in time to find the younger McComb talking to his business partner Jack Parker about their company's new computer chip. As Parker offers to buy McComb's share of the company, the older McComb arrives from 2004 to inform his younger self not to accept the offer as the computer chip will make great profits in the future. Walker interrupts the meeting and McComb attempts to kill him. Walker avoids McComb and the senator manages to escape back to the year 2004.

Having altered 2004, McComb has shut down the TEC, and his presidency is close. He orders his men to kill the still single Walker in the past before he joined the TEC so that no one can stop him.

Later on, Walker steals the prototype time travel device with the help of Matuzak and travels back to 1994 and convinces his wife Melissa that he is from the future. Already knowing that McComb's men from the future are going to arrive at their house that night, Walker waits for them and beats them all. McComb times the bomb that had previously killed Melissa and holds her hostage in the master bedroom, telling Walker that even if he dies his younger self will still be president in the future. The senator believe Walker is going to be as bad as him when he changes history, but Walker corrects that when Melissa died at the future McComb's hands, it caused a change in the timeline, and he's trying to set history right. The younger McComb then arrives due to a fake message Walker had previously sent him, and while he and McComb argue about it, Melissa takes the opportunity to break free of McComb's grasp. McComb shoots Melissa but this doesn't kill her, and Walker grabs the younger McComb and pushes him into his older self. According to the laws of time travel, two versions of the same matter cannot occupy the same space at the same time. As a result, the two McCombs fuse into a bloody mass of fleshy jelly that melts into the floor and dissolves, killing them both and erasing the senator's existence from the modern day. 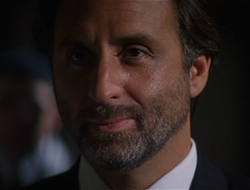 McComb meets his younger self for the first time 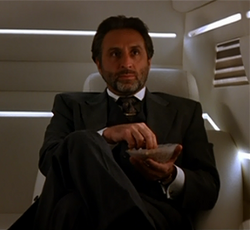 McComb planning to dispose of the 1994 Max Walker, whilst eating peanuts 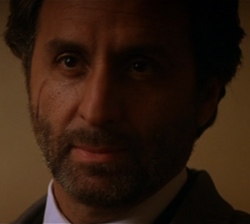 McComb at Walker's old house in the past 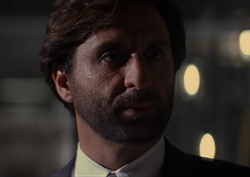 The two McCombs fuse together, becoming a bloody mass.
Add a photo to this gallery

Retrieved from "https://villains.fandom.com/wiki/Senator_Aaron_McComb?oldid=4277137"
Community content is available under CC-BY-SA unless otherwise noted.