My Little Pony: FIENDship Is Magic

Kidnap a unicorn from Equestria (both succeeded).
Drain the unicorn of magic.
Travel to Equestria with Tirek to drain all the ponies of magic (both failed).

Sendak the Elder is a minor antagonist from IDW's My Little Pony: Friendship is Magic comic series, serving as a major antagonist in the second issue of My Little Pony: FIENDship Is Magic. He is the former mentor of Tirek, and the one responsible for teaching him how to drain magic from other creatures.

Sendak was an old centaur, with dull red skin, a skinny frame, and a long beard, greatly resembling Tirek's weakest state (likely because his power had diminished over the years due to his age and left him in a weakened state compared to young and healthy centaurs in their prime such as Vorak or Tirek's more powerful forms), though he had much longer horns which more resembled Tirek's second form and the look he had in the comic as a young boy. He wore a black wizard robe.

Like Tirek, Sendak was power hungry and was willing to kidnap and drain a unicorn to increase his own power. Given how much King Vorak seemed to disapprove of Tirek seeing him, it can be assumed that Sendak was an outcast and had already committed crimes in the past. It's even hinted that he planned to journey to Equestria with Tirek to drain all the magic from the land when Tirek was older. However, unlike the majority of villains in Friendship Is Magic, Sendak actually seemed to somewhat care for his allies, as he seemed to genuinely care for Tirek as his protégé. He was shown to be quite shocked at Tirek's betrayal, suggesting that he valued trust and loyalty, unlike many other villains in the series.

Sendak was a mage who practiced dark magic. His only known spell however was the one that allowed him to drain magic from other beings, giving it to himself to increase his own power. This was a spell he taught Tirek, who would make it his trademark move. Aside from this, Sendak presumably had knowledge of many other spells. He was also very intelligent, acting as Tirek's mentor and managing to kidnap a unicorn from Equestria. He also possessed a drug that could be used to incapacitate others for long periods of time. He must have been skilled in stealth to have succeeded in capturing a unicorn and returning to his land undetected. However, due to his age, he was physically weak. This and his trust in his own allies would bring about his downfall.

Sendak was an elderly centaur hermit who lived in Tirek's kingdom. When Tirek was a young boy, unhappy with the fact that his father King Vorak kept disapproving of his behavior, he started visiting Sendak despite Vorak telling him not to, eventually becoming his protégé. Sendak mentored Tirek in magic, helping him learn to master his great power, which was said to be unusually great among his race.

One day, Sendak left for Equestria after hearing tales of the magic that was there. Sendak returned with a captured unicorn. When he next saw Tirek, he explained to Tirek that there was a spell that would allow them to drain magic from unicorns. Sendak explained that Equestria had more magic than anywhere else in the world, and that draining the magic of the ponies would make them indomitable forces. Sendak stated that he planned to drain the unicorn himself, as Tirek was too young to accurately perform the draining spell, and that he would have to wait until he was older (implying that Sendak ultimately intended for them to journey to Equestria together when Tirek was older so they could steal all the magic from the land). Rather than drain the unicorn right away, Sendak decided to sleep and do it the next day.

That night, as Sendak slept, Tirek snuck back into his cave to try and perform the draining spell. As Sendak had stated, Tirek was unable to properly perform it. The magical feedback from the attempt caused a cave-in that awoke Sendak and freed the unicorn. Sendak begged Tirek to help him, but Tirek abandoned his mentor to his fate.

The next morning, it was revealed that Sendak had survived the cave-in and was rescued by Vorak's forces, who had also recovered the unicorn and were sending him back to Equestria. However, for kidnapping the unicorn and trying to drain his magic, Sendak was sentenced to spend the rest of his life in the mines doing hard labor. Tirek managed to hide his involvement, and decided that one day, he would travel to Equestria to take all the magic for himself, and then rule over the land.

Given his age and the fact that Tirek was still a young boy at the time whereas he would be an adult when he traveled to Equestria, not to mention the fact that he spent over a thousand years in Tartarus, it can be assumed that Sendak died of old age at some point. 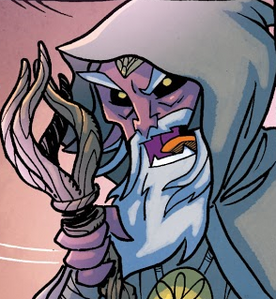 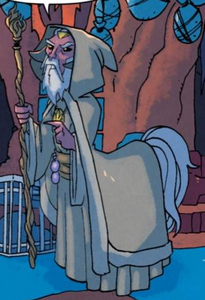