Villains Wiki
Register
Don't have an account?
Sign In
Advertisement
in: One Piece Villains, Anime Villains, Manga Villains,
and 28 more

Sengoku is a major antagonist in the One Piece franchise, serving as the secondary antagonist of the Paramount War Saga, and as one of the three main antagonists (alongside Marshall D. Teach and Akainu) of the Marineford Arc. He is the former Fleet Admiral of the Marines, one of the legendary figures of the era of Gold Roger, and is long time friends with retired Vice Admiral Monkey D. Garp and the Marine's "great staff" Tsuru. After the war in Marineford, Sengoku retired from his position and was replaced by Sakazuki.

Sengoku is presented as a proud, intelligent, and loyal follower of the World Government, who is willing to follow all of their orders. He holds a deep sense of justice, and opposes anyone who would go against the World Government. Because of this, he is very diligent as Fleet Admiral and adamant in capturing Pirates or stopping any potential threat to the World Government. This determination was shown when he decided to follow through with the World Government's orders to initiate a Buster Call on Ohara Island simply because they could read the poneglyphs which held information on the Ancient Weapons, and when Saul noted that the Oharans were only interested in learning the history of the world and had no interest in using the Ancient Weapons for destruction, Sengoku merely brushed it aside and told Saul to follow orders.

Sengoku showed great fear in a person's birth parent being enough to determine their future and potential threat, as shown with Ace being the son of Roger and Luffy being the son of Dragon. Sengoku went to great lengths to take care of both threats, holding a public execution for Ace and attempting to personally kill both him and Luffy during the Marineford War to ensure the security of the World Government.

However, as the years went by, the unwavering faith he had in the World Government began to fade, reaching it's breaking point at the end of the Marineford War, when he learned that the World Government wanted to keep the break-out at Impel Down a secret in order to protect the World Government's reputation. When hearing this order, he was extremely enraged that the World Government took priority of saving face over ensuring the safety of innocent civilians and governing nations. It is because of this event that he resigned as Fleet Admiral out of frustration with the World Government. This shows that his convictions are rooted in the desire to maintain peace and protect civilians, and his actions at Marineford were out of fear of what the conflict the pirates would bring and how the secrets of the One Piece could lead to total war. He also shows a compassionate side, taking in Donquixote Rosinante and treating him like his own son, and was driven to tears upon learning of his death.

After resigning from Fleet Admiral, Sengoku becomes much more jovial and laid-back, teasing Sakazuki about the responsibilities and burdens of being Fleet Admiral, acting nearly identical to Garp when eating Rice Crackers and Soba Noodles. This indicates that a large reason for his serious and cold demeanor was due to the immense burden of his position leading the Marines. When Akainu interrupted while Sengoku telling the event of the Rocks Pirates to the young marines, Sengoku doesn't mind as well talking to Akainu about Kozuki Oden.

Forty years ago, Sengoku was involved in the event of the Rocks Pirates.

A week before Pirate King Gol D. Roger's execution, when Shiki attacked Marineford demanding that he be allowed to kill Roger, Sengoku and Garp intercepted him and fought him together.

After a fierce battle that destroyed half of Marineford, they managed to defeat the Flying Pirate, and imprisoned him in Impel Down.Ohara Incident Twenty years ago before the current storyline, Sengoku used to be an admiral. During his time as an admiral, he received orders from the World Government to carry out a secret mission. This mission was to send a Buster Call to obliterate Ohara.

With these orders, Sengoku gave the Golden Den Den Mushi for the operation to CP9 director who was to investigate the situation, Spandine. Among the five Vice Admirals Sengoku chose to lead the Buster Call were Sakazuki, Kuzan, and Jaguar D. Saul. After the arrest of Nico Olvia, Sengoku notified Saul of his role in the upcoming mission.

The giant protested against this and tried to reason with Sengoku that the Oharans were merely scholars interested only in history. Sengoku however turned a deaf ear and told Saul to just follow orders. Later, Sengoku received news that Saul had liberated Nico Olvia from her imprisonment. Seeing that the Buster Call mission to Ohara was in jeopardy, Sengoku ordered his subordinates to quickly find the two before the operation could be stopped.

After the operation was finished, Sengoku was informed by Spandine that one of the scholars of Ohara had escaped from the Buster Call attack. This little girl, Nico Robin, was deemed a threat. With that in mind, Sengoku and other high ranking officials put up a bounty of Beli 79,000,000 on her in order to help catch her.

Even without his Devil Fruit powers, it is implied that he has enormous strength, enough to effortlessly hold down an enraged Garp with one hand. Being a prominent figure in Roger's era, Sengoku continues to be one of the most feared and prominent figures of the One Piece world. Sengoku is renowned for his tactical and strategic genius by Marines and pirates alike: he is mainly responsible for all the Marine maneuvers deployed throughout the Whitebeard War at Marineford, such as forwarding a plan to all Marines that Portgas D. Ace was to be executed ahead of the official schedule with the intention that the opposing pirate forces would intercept the message and lose their composure; he then conspired with Admiral Akainu in a plot to derail the alliance between Whitebeard's core divisions and the 41 independent New World pirate crews assisting by directing a 20-strong Pacifista division to target only the non-Whitebeard division pirates, and it was possible that the earlier transmissions regarding Ace's true parentage was not only an act of public justification but also to demoralize those pirates who were undermined by the Roger Pirates: with Akainu's persuasion, Sengoku's plan managed to drive one of those captains to attempt assassinating Whitebeard himself, and while the blow was not fatal, it did further debilitate Whitebeard's already hazardous condition. He operated his strategies while keeping close in mind the various powers of his greatest subordinates, especially the Marine Admirals: raising Marineford's siege walls in conjunction with Akainu's "Ryusei Kazan" to rout the allied pirate forces and destroy Whitebeard's flagship, the Moby Dick while protecting the brunt of the Marine garrison from the damage.

Sengoku ate the "Hito Hito no Mi, Model: Daibutsu", a rarer-than-Logia Mythical Zoan-class Devil Fruit which allows him to turn into a gigantic Daibutsu, which is probably the reason for his nickname. Nearby Marines claim that they have never seen him use this power before the war.While enlarging, his Marine jacket, glasses, and pants enlarge with him; his uniform, which also enlarges, seems to be tied around his waist, though he was not seen doing it during the transformation. The color of his body (and uniform) seems to change to a golden skin color, similar to a polished gold statue. In this form his body has different proportions, his torso and arms are much larger compared to the rest of his body. This ability gives him a massive power boost to his already impressive strength, enough to cause the execution stand to collapse in one indirectly connecting punch, despite the combined effort of Luffy's Gear Third and Mr. 3's Candle Wall to absorb the attack. He can also launch an explosive shock wave with a palm thrust, enough to send a majority of the Blackbeard Pirates flying a fair distance.

Sengoku is one of the very few people in the world who can use all three types of Haki. 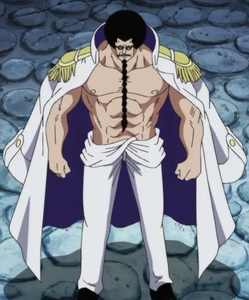