Sensei is a DC comics villain and an enemy to Batman.

The Sensei is an aging martial arts master from Hong Kong. After earning Ra's enmity (for some reasons unknown) he became one of the leaders of the League of Assassins.

Sensei is one of few Karate teachers in the DC Universe. He was given control over the League of Assassins after Doctor Darrk's death by Ra's al Ghul, but rebelled against Ra's. This was also the time in which he was said to have lost his sanity. He has trained only one student to full mastery at least within regular DC history. That student was Ben Turner aka Bronze Tiger. First, Sensei sought to use him for evil, which made Ben feel bad. Eventually, he left Sensei. He was also the man who ordered the murder of Boston Brand who became Deadman after his death. He was responsible for trying to cause an earthquake to kill a number of delegates, but was stopped by Batman. Now he is attempting to take control of the League of Assassins over from the revived Ra's Al Ghul and has been revealed as his father.

In this story, Sensei reveals that he is the father of Ra's Al Ghul. Batman (Bruce Wayne) ends up getting fatally wounded by Ra's al Ghul because Ra's is after the Fountain of Life in Nanda Parbat since he can't get Damian to be his youthful host. The Sensei suprises the both of them and fatally stabs Ra's while Bruce made his way to the fountain. The Sensei and Bruce combat each other near the fountain but they end up falling in. The Sensei seemingly dies in the fountain because the fountain could tell that the Sensei's life was impure while the Batman was saved.

The Eye of the Beholder

The Sensei does indeed resurface thanks to the intervention of Peacock who pitied the Sensei for his former life. She had a vile of the Lazarus Pits' essence and poured it down the throat of the Sensei's corpse. Peacock hoped Sensei's new lease on life will lead him to true enlightenment but Peacock underestimated the side effects of the Lazarus Pits. The Sensei kidnaps Peacock's brother Luki because Luki is the rightful bearer of the Beholder Mask. Sensei was trying to find the Mask of The Beholder in order to wield its power. Batman and Peacock get into a fight with the Sensei but things didn't go in their favor. The heroes manage to getaway from the Sensei and I-Ching meets up with them later.

I-Ching explains to Batman the origin of the Beholder Mask and why the Sensei wants it. The first written account about the Beholder Mask was documented in1700 BC during the Shang Dynasty. The first man to wear the mask was driven to the point of insanity. He destroyed villages along the Yellow River until he was stopped by a group of monks from the Yangtze River. The monks hid the mask in their village but the temptation to wear it grew supernaturally within the village as time went by.

In 1929, a monk returns to his village with Dr. Paul Henry, a renowned archeologist/ architect who was studying China's Neolithic Era. They find the monk's entire village was burnt to the ground and in the middle of the village, the monk finds his brother wearing the mask. The entire village was driven insane by the the mask's presence and they killed each other just so one of them could possess it. The monk kills his brother by severing his head from his body but the monk sustained fatal wounds. With his last breath, the monk asks Dr. Henry to hide the mask so that no one can ever use its power again. Dr. Henry agrees to the monk's final request. The historian retrieves the mask then he makes his way through the bamboo forest of the Yangtze River and heads back to Gotham City.

Unfortunately, the dark magic behind the mask began to effect Dr. Henry mentally. The mask was driving Dr. Henry into committing suicide and whispering hellish things into his ears. Dr. Henry could no longer handle the mask's presence so he calls on his fellow colleagues to aid him in hiding the mask. Dr. Henry and his colleagues were part of a clandestine organization of wealthy architects called the Jade Compass Society who were known for keeping secrets hidden. The society hid the mask in a structure within Gotham thanks to the outside assistance of a Mr. Fong and each member swore to never speak of it again.

Luki began to have visions about the Beholder Mask and the destruction it would bring to Gotham. It was for this reason that the Sensei has Luki as his prisoner. Dick leaves I-Ching with Peacock since she has gone into a deep sleep because she telepathically feels her brother's pain as the Sensei inflicts torture on Luki. As for Dick, he finds out that Lucius Fox's father Jasper was one of the society members who helped Dr. Henry hide the mask. It seems Jasper Fox and Dr. Henry Sinnot worked hard to ensure that certain buildings within Gotham were made historical landmarks.

Dick first goes to Dr. Sinnot's residence to get answers but he finds Gotham PD instead. Dr. Sinnot was murdered and the cause of death was contributed by several stab wounds. Bullock informs Dick that Sinnot had made a call to a Mr. Fong of Fong's Antique Shop and Fong's shop was blown to pieces a few minutes after his phone call with Sinnot. Dick was running out of leads. Jasper Fox was killed an automobile accident, Mr. Fong and Dr. Sinnot were stabbed by something broad like a sword.

Meanwhile, I-Ching puts a pencil and paper near Peacock and Peacock draws her latest vision from Luki. I-Ching uses this information and contacts Batman by via Bat Signal. Peacock's illustration depicted an abandoned butcher shop in Chinatown. Unfortunately, the both of them come under attack by the Sensei who has been putting information in Luki in order to set up the heroes. The Sensei eventually figured out Luki's telepathic connection to Peacock so he used it to his advantage. However, the Sensei did manage to extract the exact location of the mask. The Sensei learned that Mr. Fong hid the Beholder in the archives of the Gotham Library.

The Sensei arrives at the library and makes his way to the archives. The Sensei finds a statue of Thomas Wayne, the library's biggest financier and destroys it. The mask was hidden in the base of the statue. The Sensei places the mask on and senses that he is not alone in the archives. Peacock had followed the Sensei by disguising herself as one of his assassins. Unfortunately, the mask gave the Sensei the ability to drain life from any living thing within a certain distance.

As Batman and Peacock lay on the floor in pain, Luki uses his telepathic powers to remove the mask from the Sensei. The Sensei refuses to admit defeat so he destroys the mask with his sword. The mask shattered into two pieces in Luki's hands. The Sensei was pushed out of a window by Dick but he doesn't fall to his death. The Sensei escaped with nothing to show for it. 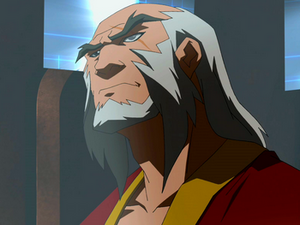 Sensei as seen in Young Justice. 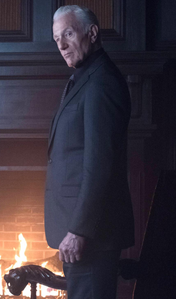 The Sensei appears as a villain in the third season of Gotham.
Add a photo to this gallery

Retrieved from "https://villains.fandom.com/wiki/Sensei_(DC_Comics)?oldid=4176814"
Community content is available under CC-BY-SA unless otherwise noted.