Wipe Cybertron clean with an army of Titans (Titan's Return)

Sentinel Prime, also known as Infinitus, was one of Optimus Prime's predecessors, who was the anti-heroic antagonist of Megatron Origin. He would return in the Titan's Return series as a fully fledged villain.

"Sentinel Prime" began as the Titan Master (a smaller robot can control a larger body as it's head) Infinitus, the herald of Nexus Prime. After his master died battling Galvatron in the First Cybertronian Civil War, Infinitus joined up with Onyx Prime, and remained on Cybertron, following the teachings of the Thirteen. Eventually, he used his Titan Master abilities to control a larger body, taking on the identity of "Sentinel" to disguise his lineage. Sentinel decided that he would use the teachings of the Primes to bring "light" to his "tarnished world", even if it meant killing everyone who stood in his way.

In the years before the Great War, as revealed in Chaos Theory, Sentinel had worked his way up to becoming the head of security for the Senate. Secretly, Sentinel assembled a militia of sleeper agents, recruited from his closest informants. Sentinel conditioned them to serve him if the time ever came.

One of the duties of his security force was to go around threatening and killing people who got in the Senate's way. After an assassination attempt on Nominus Prime, he eagerly watched Senator Proteus announcing the "Clampdown", which would improve security at the cost of "some of the freedoms" of the populace. However, Sentinel was constantly interrupted by reports that an intruder was fighting his way into the Grand Imperium, defeating all the security squadrons Sentinel sent at him. Interested in seeing how things would play out, he witnessed Orion Pax enter the Senate's chamber and confronted them over their corruption. Proteus eventually ordered Sentinel to have him removed.

Taking over the Senate

As the Clampdown began, the Senate, who were the ones actually behind the attack on Nominus Prime, had Sentinel try to tap into the Matrix of Leadership's powers. In the process, Sentinel discovered that the Matrix was a fake, and with this revelation the Senate decided to get rid on Nominus. They spreaded rumours that Sentinel was showing signs of affinity for being a Prime while he got to work on planning a "Decepticon terrorist attack" that would give him an excuse to round up all possible Decepticons to be brainwashed. While Orion Pax thwarted this, Sentinel's men discovered Senator Shockwave was quietly forming an army of dissident outliers. Sentinel ordered Shockwave's academy destroyed in an "accident" and Shockwave taken into custody. The Senator confronted Sentinel and Proteus with his knowledge of their illegal takeover of the Senate, but they had him subjected to empurata and brainwashing.

Upon assuming office, Sentinel Prime operated out of the Security Services Headquarters in Kaon, generally regarded as "the worst place on Cybertron." By this point Sentinel had developed great disdain for government authority, irritated that they kept telling him how to do things instead of just giving him what he asked for, even claiming he did not get to set policy. He worked alongside his lieutenant, Prowl, and viewed Prowl's methodical approach as anathema to his more straightforward and brutal tactics. Sentinel also formed an Elite Guard for all the important work he wanted done secretly, like secretly capturing a spark hot spot so it could be experimented on and the Functionist Council couldn't use it. During this time, Sentinel and Prowl briefly visited Luna 2 to check up on the progress of a new energon mine supervised by Soundwave. Sentinel would lose the hot spot to Pax after the Elite Guard, made up of bruisers and thugs, were defeated by Orion's forces.

Sentinel was interrupted by Prowl during target practice to inform him that Senator Decimus had been badly injured in a riot. He ordered Prowl to handle the situation as he didn't want to deal with a "whining" senator. After a surge in illegal gladiatorial sports, where Megatron rose to prominence, Sentinel personally took charge of the investigation from Prowl, ordered tactical recon teams ("Panorama") to watch eight potential venues and intelligence officers to watch everything, and a core strike team ("Hammer") to hit Megatron's following when the venue was identified. Officers Bumper and Fastback did indeed find a venue but both were murdered before they could report in.

Sentinel Prime vowed not to let their deaths be in vain, and at their funeral, he urged others to let their deaths be a call to arms. As later revealed in Ten To Midnight, he privately told his closest minions that he planned to find a Titan and unleash it on the Decepticons. After Senator Decimus was kidnapped by the Seekers at Megatron's orders, Sentinel Prime raided Megatron's base. They captured Megatron and most of the others, but were forced to free Soundwave per Senate directive, much to Prime's frustration. Unfortunately for Sentinel, this had been Megatron's plan all along and Starscream released all the prisoners in the Security Services' HQ.

As chaos broke out across Kaon, Sentinel Prime held the line until he decided to take things to the next level. Though the council denied permission to use it, Prime returned with the mighty "Apex Amor". Fighting Megatron, and seemingly winning, Sentinel radioed the Autobots to say he had succeeded in creating an opening of enemy lines, but Megatron rose back up. Megatron tore into the armor and pulled Prime off a cliff. On the ground, Sentinel was beaten by Megatron, seemingly to death. Afterwards, the former Prime's barely functional body was dumped into the middle of the Autobot forces, and Prowl ordered a retreat.

As revealed in The Last Autobot, rumours spread that Sentinel had survived his battle until the replacement Senate put out footage of the body being retrieved. Sentinel's body was subsequently laid to rest, and received a state funeral at the Primal Basilica in which grieving crowds lined the streets. With his first body damaged beyond repair, Infinitus secretly abandoned his old body and went into hiding beneath Kaon. Unable to explain this baffling "mutilation", Prowl claimed that Sentinel's body had been desecrated by Decepticons, who had stolen Sentinel's head.

As revealed in Last Light, Infinitus secretly worked to build a new body for himself. Due to "subconsciously attuning" with he sparks of the Titans, this took longer than expected, and slipped in and out of consciousness over millions of years.

Sentinel Prime in the Apex Armor. 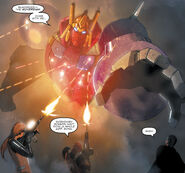