Leader of the Autobots (formerly)

Mentor of Optimus Prime (formerly)
Member of the Primes

Betray the Autobots (both succeeded).
Use the Space Bridge to bring Cybertron into Earth's Atmosphere (briefly succeeded).
Sacrifice Earth and its resources in order to restore Cybertron (failed).
Bring Optimus Prime to his side (failed) or kill him (almost succeeded, but then failed).

He was the original Autobots leader before Optimus Prime. After his resurrection, it is revealed that he betrayed the Autobots and made a deal with Megatron so that he could save Cybertron. Sentinel's ruthless motives, selfishness and cruelty towards both Optimus and Megatron led to his own death.

He was voiced by the late Leonard Nimoy, who also portrayed Galvatron in The Transformers: The Movie, Mirror Spock and Henoch in Star Trek: The Original Series, Dr. Barry Mayfield in Columbo, Mr. Hyde in The Pagemaster, The Zarn in Land of the Lost, and Master Xehanort in the Kingdom Hearts series.

In 1969, Neil Armstrong was secretly assigned to search on the moon and analyzes the crash. Armstrong claimed there were no survivors. Since 1972 no one went to the moon since, and was deemed above classified. Neil Armstrong decided to take the space bridge pillars from the moon, which were then stored in secret by the government which became a law that no one is to know of the alien technology. This law was enforced by the arrogant Director of National Intelligence, Charlotte Mearing before Sentinel was revived.

Following the death of the Fallen, Optimus Prime and Ratchet were helping their human allies protecting the Earth, when they encountered a piece of a machine that was originally part of the Ark. They eventually discovered that the Ark crashed landed on the dark side of the moon. The Autobots flew to the dark side of the moon and found the Ark, along with both Sentinel Prime, and five Pillars. With the Autobot Matrix of Leadership, Optimus revived Sentinel Prime. Sentinel scanned a Rosenbauer Fire Engine for an Earth form. When Sentinel Prime and Optimus Prime were talking to each other alone, Optimus thought that since Sentinel Prime was his leader, Sentinel should have the Autobot Matrix of Leadership and continue leading the Autobots. However, Sentinel said that since he knows nothing about this planet, Optimus should keep the Matrix, teach him about the planet, and continue being the leader of the Autobots.

The Decepticon sub-group, the Dreads (Hatchet, Crowbar and Crankcase) chased after Sentinel Prime on his way to a different NEST base. Bumblebee, Dino, Ironhide and Sideswipe guarded Sentinel allowing him to escape wherein Bumblebee and Dino killed Hatchet while Ironhide and Sideswipe destroyed Crankcase and Crowbar. After the chase scene ended, Sentinel revealed his true colors, claiming that the Autobots shall realize that he was not actually going to help the Autobots win the war, but instead made a deal with Megatron. He murdered Ironhide, the Autobot closest to him, to distract NEST before wiping out NEST, with only a few human survivors.

The Invasion and Usurping the Decepticons

With the help of Megatron, Starscream and other Decepticons, they were able to open a space gate so that the Decepticon protoforms can invade the Earth. He decided to spare Optimus, because he was his apprentice once, and he wanted Optimus to realize how little humans actually cared for them (foreshadowing what would happen in Age of Extinction). They first took over Chicago, IL and blocked it off so the protoforms would kill any Autobots attempting to infiltrate. The protoforms also killed most of the Chicagoans (except for Dylan Gould due to him being an ally of Soundwave, and Carly, his girlfriend). As the space bridge pillars were being set up, Megatron began to go on about the success and victory of their plan, in which Sentinel then attacked him, reminding him of his place: he was not working for Megatron, he was working with him. He then proceeded to take over full command of the Decepticons. Sentinel stayed out of most of the battle, relying on the Decepticon warriors instead, including (but not limited to) Shockwave, Soundwave, Laserbeak, Barricade and Starscream (all of which, except for Barricade, would be killed during the battle).

Other Decepticons were placed around the world with a few of the Pillars. They were going to be used to open a Space Gate and bring Cybertron into the Earth's atmosphere. After the Red Pillar was deactivated by Optimus, (the Pillar that controls all the other pillars) Sentinel Prime fought all the Autobots and N.E.S.T. with little to no effort. While he was fighting the Autobots, Sentinel Prime ordered any surviving Decepticons and allies of the Decepticons to reactivate the Pillar. NEST was able to land some shots on Sentinel, and he attempted to escape, but Optimus chased him and attacked him. Sentinel managed to overpower Optimus and slice one of his arms, allowing his former student to vainly beg for mercy before he would deliver the killing blow. Simultaneously, Carly (Sam Witwicky's new girlfriend) convinced Megatron to turn on Sentinel Prime, claiming that if Sentinel did succeed in killing Optimus and transported Cybertron, Megatron would be nothing more than Sentinel's own pawn. Megatron chooses to heed her warning (of course, he only did so because he wanted to regain leadership of the Decepticons) and rushes into the one-sided duel just as Sentinel is about to kill Optimus and severely incapacitates Sentinel, claiming that Earth is his planet to rule. After the space bridge was destroyed, Megatron proposed a rather insincere truce to Optimus, but Optimus refused and slew him with no effort, knowing his true intentions and possibly doing so as punishment of his previous actions.

With his plans in ruins, the severely weakened Sentinel attempted to justify his actions, claiming all he ever wanted was to save the Transformer species, which was why he betrayed Optimus. His former pupil, however, countered it was never about betraying Optimus; by foolishy allying with Megatron and planning to enslave humanity, Sentinel had "betrayed himself". Upon hearing Optimus pick up and cock Megatron's fusion shotgun, now knowing Sentinel is now too much of a fool, killing his friends, and could never be trusted again, as Optimus prepares to fire, as Sentinel gets scared and desperately begs for Optimus not to kill him, as Optimus shoots him in the back and then the head, putting an end to Sentinel's life. With Sentinel's death, the deaths of Ironhide and the human soldiers were avenged.

Despite being killed in the previous film, KSI manages to recover parts of Sentinel's body, particularly his head, which are used to create many man-made Transformers, including Galvatron, who is later revealed to be possessed by the still living mind of Megatron.

Sentinel Prime, at first, seemed to be a heroic figure and a symbol of freedom to Optimus Prime, but later on, he develops into a malevolent and corrupt lunatic who wishes to dictate everyone else, either Cybertronian or human.

As an Autobot, Sentinel had taught the value of freedom being everyone's right back to Optimus when the latter was the former's student. However, over the years, Sentinel Prime has come to prefer having power and authority much more than enforcing freedom for everyone. Optimus claims that Earth should be the new home for their race as the humans welcomed them, although Sentinel being discriminatory despised the idea of sharing a planet with weaker, smaller organic beings and he wanted Cybertron restored instead. He was more than willing to kill his former student and fellow Transformers if it meant getting his way.

Sentinel also proved to be highly power-hungry, as he forced Megatron to abdicate from being leader of the Decepticons. Despite the brief succession, it ultimately led to his downfall as Megatron, having been convinced by Carly that he would only be one of Sentinel's pawns, realized Sentinel was using him and saved Optimus as he severely incapacitated Sentinel with minimal effort which led to both of their deaths by Optimus. 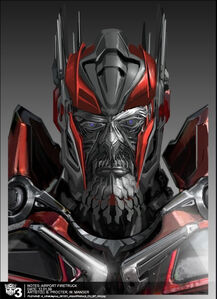 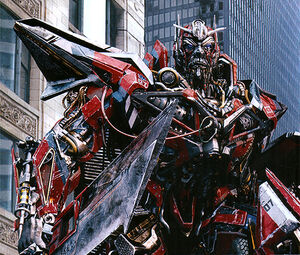 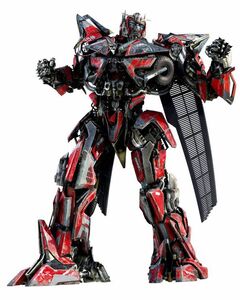 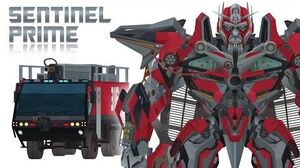