NOTE: This article is about the incarnation of the Sentinels from the X-Men film series. The mainstream version can be found here: Sentinels.

Mk. X possess the same except for the minigun which has been replaced with changing the arm into a spear as well as the ability to discharge laser beams from it's face
Adapt to any mutant powers through metamorphic transformation (Mk. X)

Hunting down and exterminating mutants

Wipe out each mutant whose hiding or not upon the Earth, including the X-Men (future; succeeded).

Wipe out every human life on Earth under the command of Magneto (past; all failed)

The Sentinels are major antagonists in the 2014 film X-Men: Days of Future Past. They are specialized mutant-hunting machines created by Dr. Bolivar Trask with help from Colonel William Stryker to hunt down and destroy mutants.

In 1973, Bolivar Trask pitches the Sentinels to Congress but they decline him so he pitches them to foreign powers. Mystique shoots Trask in revenge for the murders he has committed of mutants while creating the Sentinels, not knowing the future this will create.

A Sentinel briefly appears during a training session in the Danger Room. After Colossus launches Wolverine into the air, he cuts off the head of the Sentinel with his claws. The head falls through the air and lands in front of the X-Men.

In a dystopian 2023, the Sentinels hunt down mutants in a war that has also wiped out most of humanity and left only the "worst" of humanity left to rule the world. These Sentinels have been created using Mystique's DNA which gives them the ability to adapt to mutant powers and even use some. The surviving X-Men gather in a monastery in China for a last stand against the Sentinels while Shadowcat uses her powers to project Wolverine's consciousness back to 1973 to try to change the future where the Sentinels were created. In a final battle, all the X-Men fall to the Sentinels, unable to flee, but hold them back long enough that Wolverine's changes to the timeline erase the Sentinel future from existence.

In 1973, Bolivar Trask pitches the Sentinels to Congress but they decline him so he pitches them to foreign powers. Mystique attempts to kill Trask in revenge for the murders he has committed of mutants while creating the Sentinels, not knowing the future this will create, but is interrupted by Charles Xavier, Beast, Magneto and a time-travelingWolverine who are attempting to prevent the destruction caused by the Sentinel project's completion. After seeingXavier's gladness after finding Mystique, Magneto tries to kill Mystique, claiming he is making a more "secure future".

Unfortunately, the fight with Mystique and Magneto reveals the existence of mutants to the world and President Nixon agrees to their use while Mystique's blood is collected from where she was wounded, allowing the Sentinels of the future to have her powers. Magneto, both to stop the Sentinels and to use them to take over the world, surrounds them in steel, allowing him to control the Sentinels at their unveiling on the White House lawn. Magneto uses the Sentinels to attack the crowd and hold off Wolverine, Xavier and McCoy, but before he can kill what he believes to be Nixon (really a disguised Mystique), McCoy suppresses his mutation with a serum causing a Sentinel to turn on Magneto.

He quickly disables it, but the distraction allows Mystique to shoot him with a plastic gun, wounding him and then knock him out, deactivating the Sentinels. After Xavier convinces Mystique through telepathy to let Trask, Nixon and his cabinet live, the world sees that a mutant saved the President and the Sentinel program is shut down and Trask is arrested for selling military secrets to foreign powers, erasing the dystopian future.

Though Sentinel program is shut down for good, at least three or four Sentinels are revealed to be under possession of Xavier. Fortunately, they no longer used to hunt down mutants, as instead, they now reprogrammed for training new X-Men members. 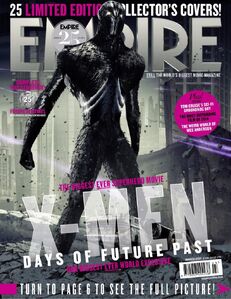 One sentinel appears on the EMPIRE Magazine. 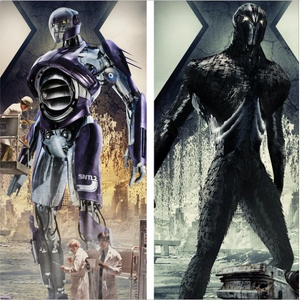 The Sentinels are erased by Logan