Devour every living being to maintain his hunger.

Robert Reynolds, also better known as Sentry, is the secondary antagonist of the entire 2005-2009 Marvel Zombies comic book metaseries, which takes place in an alternate version of the Marvel Universe, called Earth-2149, where he was responsible for infecting all super-powered beings into flesh-eating zombies.

Little is known about Sentry's life before the zombie plague occurs on Earth-2149, but it can be presumed it was most likely the same as his Earth-616 counterpart.

After the Hulk from Earth-91126 got infected by Giant-Man and went back to Earth and started to devouring everyone in New York, Sentry was called in by Iron Man, Doctor Strange, Mr. Fantastic and Professor Xavier to come and stop Hulk from murdering everyone.

While beating him, the Hulk transforms into Bruce and asked Sentry for help. But once Sentry transforms into Robert, Bruce bits his hand, becoming infected with the zombie virus and begins to devour all life in Earth-91126, which turned into Earth-Z.

Sometime later, He joined a group with Quasar, Super-Skrull, Quicksilver, Thundra, Namor and Moon Knight. They are seen in their high table that was surrounded by the corpses of both heroes and villains, discussing their favorite moment back when they were devouring living beings. Had enough with the endless banter, Super-Skrull calls Giant-Man asked if he unlocked the secrets to the Watcher's intra-reality transport system. Giant-Man says the tech was designed to resist any kind of tamping and coded in a language, having a few the of world's smartest people. But the zombies demanded him to give them a "virgin dimension". However, a zombified Professor X scanned a living flesh located somewhere on Earth.

The Evil Avengers quickly assembled and went to the location. However, it was a trick by James Rhodes, who became the new Iron Man and cutting off one of his fingers. The New Avengers and Evil Avengers fought, resulting in killing Super-Skrull, Namor, Thundra, and Quicksilver. During the battle, they were transported to the Watcher's tower, but Giant-Man planned to use Sentry as a battery to power up the dimensional portal. However, the New Avengers released Sandman who killed the remained zombies and Sentry was sent to Earth-2149 by Uatu to contain the plague.

However, Sentry somehow ended up at the gates of Heaven and decide to devour the others. Ash Williams armed his shotgun and shoot at Sentry's face. However, being an extremely powerful being, this caused Sentry to become enraged and punched Ash so hard he ripped the fabric of reality and fellow Ash back to Earth. He crashed through the purple lighting to New York, where it all started the main course.

When the Avengers arrived at the scene, Sentry went and bites them. After becoming infected they turned their attention to the civilians and started to devour them. The whereabouts of Sentry remains unknown. 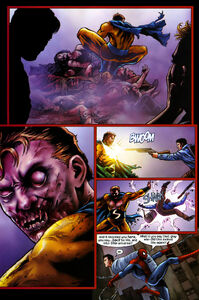 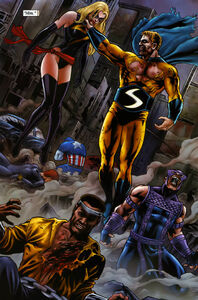 Infecting the Avengers.
Add a photo to this gallery
Retrieved from "https://villains.fandom.com/wiki/Sentry_(Marvel_Zombies)?oldid=3560981"
Community content is available under CC-BY-SA unless otherwise noted.