Sentry 459 is a villainous giant automaton from Fantastic Four #64.

459 is part of a series of Sentries, powerful robots created by the Kree to be employed as guardians of their various outposts throughout the Marvel universe.

Some 80,000 years ago, in Kree year 1220, Kree scientist Bronnek developed the prototype Sentry. The of the Kree Empire began to mass-build Sentries for military purposes. Hundreds of thousands of Sentries were built, although only a few thousand are currently active.

One of the first Sentries sent to the Earth system was Sentry 459, which escorted a team of Kree scientists wanting to research the most advanced life form of the system some 25,000 years ago. The Kree noticed that Earthlings could evolve to become advanced beings similar to the Eternals, so the Kree performed their own experiments, creating a genetically-advanced tribe that would become the Inhumans . The scientists left, but Sentry 459 was programmed to keep Inhumans under surveillance, monitoring their progress in civilization. The Kree wanted to one day use the Inhumans as an army.

During the mid-20th century, an archaeologist discovered the advanced subterranean base of Sentry 459 on a small island in the South Pacific. The Sentry re-activated due to the alarm system and again contacted its masters. One of the surveillance devices attracted the attention of the Fantastic Four, who were on vacation nearby. the Sentry fought them, but the Fantastic Four defeated the robot, freed the archeologist and his aide and escaped. The Sentry was later placed under custody of the United States government and taken to Cape Canaveral .

A Kree agent, Colonel Yon-Rogg, managed to get access to the Sentry and reactivated it. Yon-Rogg was the commander of a Kree reconnaissance mission on Earth, and also an enemy of his own agent, Captain Mar-Vell . Yon-Rogg wanted the Sentry to fight and destroy Mar-Vell, but Mar-Vell defeated the Sentry with the help of Carol Danvers.

Sentry 459, like all sentries, has an auto-repair system, can project energy beams from its eyes, great strength and durability, flight and can send messages to the Kree at light-speed. 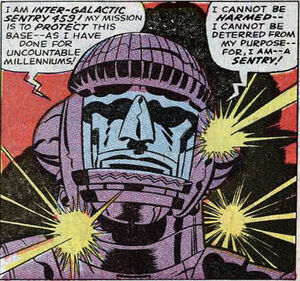 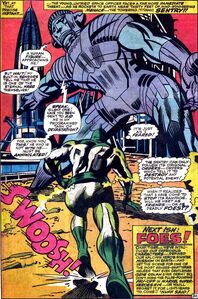 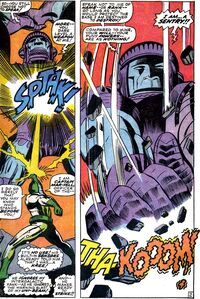 It is better to die for the Supreme Intelligence than live for yourself. 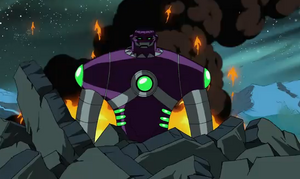 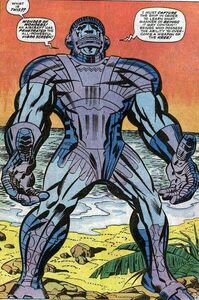 Wonder of wonders.
Add a photo to this gallery

Retrieved from "https://villains.fandom.com/wiki/Sentry_459?oldid=3891772"
Community content is available under CC-BY-SA unless otherwise noted.