Live under Christian Fundamentalism and disengage themselves from Federal laws.

The Separatarian Sect, also known as the "Separatarians", is a Christian Fundamentalist cult and the major antagonists of the Season 4 episode "Minimal Loss" of Criminal Minds.

Libertarian Leo Kane founded the Liberty Ranch (also known as the Liberty Church Ranch) within La Plata County, Colorado in 1980 as a self-sustaining community. At some point a pregnant woman sought shelter with the group and joined them, giving birth to a son she named Charles Mulgrew. Charles was unusually intelligent and, at the age of 17, was kicked out of the ranch when several young girls claimed he had forced himself on them.

Charles, now known as Benjamin Cyrus, returned to the ranch in 2000, shortly after the death of his mother. Ben ousted Leo from power, putting a gun to his head and claiming God told him to take over. With Leo gone (and later incarcerated for tax evasion and assault) Ben introduced religion to the ranch, effectively transforming it into a cult. Stockpiling weapons during his leadership, Ben also had his way with several young female members of the cult, even marrying a few of them. In 2008, the cult came under investigation when a 911 call from a member implicated Ben was having sexual relations with a minor. Getting calls from the authorities, Ben agrees to allow three child interview experts in to talk to several of the girls living on the ranch.

When Nancy Lunde along with the undercover FBI agents Emily Prentiss and Spencer Reid arrived at the ranch, Ben greets them warmly and sets up an impromptu interview room in the schoolhouse. As Nancy and the agents talk to fifteen-year-old Jessica Evanson, discovering she is actually married to Ben, the ranch gets a tip that the police are planning a raid. Placing the women, children, Nancy, Reid, and Prentiss in the tunnels beneath the ranch, Ben and his most dedicated followers get into a heated firefight with the SWAT agents when they arrive. In the chaos, three of the cultists are killed, while two of the SWAT agents are wounded, and Nancy is accidentally killed by one of the agents' stray bullet when she ventures above to talk to Cyrus. Ordering a ceasefire, Ben allows the agents to leave with their wounded (one of whom dies en route to the hospital).

When the authorities and the BAU team set up outside the ranch, Ben is contacted by Rossi, who begins negotiations, Ben telling him about Nancy's death during their discussion. Having agreed to give the cult medical supplies, Rossi drops off several bugged boxes the next day, Ben letting him inside and showing him the women and children, who he refuses to let go when Rossi asks him to. When Rossi leaves, Ben pours each member of his congregation a cup of wine, telling them after they drink it that the wine was poisoned. After instructing his lieutenant Chris Cole to write down the names of those who panic after hearing the announcement (to know who his true followers are), Ben tells everyone there was no poison and he was giving them a test.

Later, after seeing a news broadcast mentioning that an undercover FBI agent is in the ranch, Ben, when Prentiss admits to being that agent, takes her to an empty room and beats her unconscious, telling Chris to keep her tied upstairs. Getting advice from Reid, who realizes the ranch is already being bugged, Ben calls Rossi and claims he will release a child if they give the name of the FBI agent inside, as a trust test. Releasing a young girl, who was his daughter, Ben is told by Rossi that Prentiss is the agent before expulsing the members who failed his wine test, leaving only his most dedicated followers. Lying to Rossi, Ben claims the cult will surrender at noon and demands the press be present; in actuality, Ben is planning on a mass suicide as a last act of defiance and has his faithful followers rig the ranch to explode.

As 3:00 AM approaches, Ben offers Reid the chance to leave, and offer the agent declines, telling the cult leader he wants to be the one to tell the cult's story. Moments later, Ben notices a squad of Humvees approaching and, enraged by this development, goes outside and fires a machine gun in the air to get the attention of the press. Preparing for the inevitable attack, Ben, after seeing Reid trying to talk sense into Chris, beats him into submission just before Morgan and several SWAT agents burst into the room, having snuck in through the tunnels and evacuated Prentiss, the women, and the children. Both Ben and Chris are shot to death by Morgan and the agents. Having run back into the chapel after realizing her mother had tried tricking her into leaving by claiming that Ben had wanted her to bring everyone into the tunnels, Jessica, upon seeing her dead husband, grabs the detonator he had dropped and activates it, setting off the explosives that were spread throughout the chapel, killing herself and any of the dedicated followers still inside while Reid, Morgan, and the other agents manage to escape. Jessica's mother was later revealed to be the one who called in Prentiss, Reid, and Nancy to the ranch in the first place, to investigate the allegations of Ben's sexual relations with a minor. 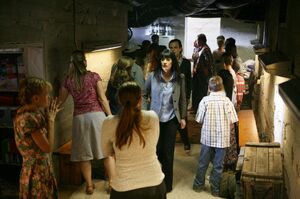 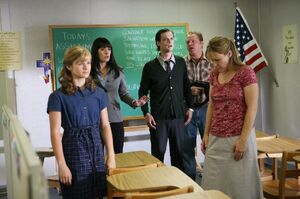