Create profit from pay per view subscribers of Death Race.

She is Death Race's hostess/executive producer, formerly of Death Match. She is a former Miss Universe who lost her crown due to allegations of having a sexual relationship with all of its judges.

She was portrayed by Lauren Cohan, who also played Bela Talbot in Supernatural.

Jones is first seen at the beginning of the film, when she films a prison riot that breaks out at Terminal Island. When later brought to Mr. Weyland, who coincidentally is also the owner of the penitentiary, due to the public relations nightmare that her footage caused, she brings up the sensational ratings that it received upon broadcast. She goes on to say that people are tired of fake violence, and strikes a deal with the man to have prisoners fight to the death in a makeshift arena as a television program called "Death Match". Herself the executive producer, Jones secretly meddles with the game by denying prisoners access to certain weapons via a control panel, in order to manipulate the excitement of the spectacle.

Outraged at the rule that a prisoner can "submit" and evade death, it is not long at all before Jones begins searching for another fatal game that is more reliably a ratings booster. When the film's hero, Carl Lucas, is brought to the prison for a botched bank job, for which he was just the getaway driver but tragically wound up killing a police officer regardless, Jones catches a glimpse of his unsanctioned driving skills on the premises, which inspires her to form "Death Race".

Warden Parks implores her not to use Lucas in the game, as it will allow the man's former employer-turned-enemy to know exactly where he his and send his thugs to kill him, but Jones could not be less sympathetic. Jones first tries to persuade Lucas to participate with the promise of his own cell, real food and (implied) sexual favors, courtesy of herself, but when that doesn't work, she arranges it so that the passive and weak Lists, a recently acquainted friend of the hero, is to be killed in "Death Match". Wishing to save his friend, Lucas complies.

Lucas manages to perform well in several races, but one of them leads to him being greatly disfigured. Jones demands that he keep racing however, threatening to have his girlfriend Katrina gang-raped if he doesn't. At the start of the next race, Jones kicks things off the announcement at the ground level as per usual. This time, however, Lucas quickly spins his car around and drives straight into Jones and kills her. 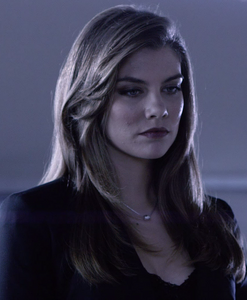 Add a photo to this gallery
Retrieved from "https://villains.fandom.com/wiki/September_Jones?oldid=3780713"
Community content is available under CC-BY-SA unless otherwise noted.