Sepulcher is an obscure monster that appeared in the Silent Hill videogame series. He appears as a boss in Silent Hill: Homecoming inside the Otherworld Version of Grand Hotel Atrium. This hideous, gruesome beast is the monstrous and vengeful manifestation of Mayor Sam Bartlett's memories of his son Joey Bartlett who he murdered as a pact made by the founding families.

The Sepulcher is a giant monster that resembles a swollen human being as well as a large tree. He hangs upside down from the celling and his body looks like a rotten tree trunk from which corpses protude, and there is a root-like tumor on his face.

Sepulcher appears when Alex Shepherd finds Sam Bartlett inside the Otherworld Version of Grand Hotel Atrium, who is drinking heavily. He shows him the broken watch that belonged to his son Joey but he throws it behind him that sinks into the ground. The memories of Joey manifest and Sepulcher rises from the ground soon after. Bartlett begs the monster for forgiveness but it crushes him with a single blow from his arm. Alex without choice is forced to fight with monstorous incarnation of Joey but manages defeats and kills Sepulcher.

In the first phase, the Sepulcher attacks with his huge paws, but his mobility is very limited due to the fact that he hangs from the ceiling. He can also create shock waves by hitting the ground. To avoid being hit by the shock wave, Alex has to hide behind shelves (which can be destroyed after some time) and in order to kill the Sepulcher he has to destroy the fleshy bags that keep the monster in his original position. After destroying the bags, Sepulcher falls to the ground and the second phase begins at that moment. Sepulcher's attacks are the same as in the first one, but he should be mentioned that Sepulcher can very easily kill Alex by crushing him. However, his weak point is that the monster can wedge his paw when he is swinging, which gives Alex the ability to repeatedly attack and kill the beast.

Sepulcher's name and appearance are symbolic of how Joey Bartlett died. His father, Mayor Bartlett, buried him alive in order to sacrifice him, to appease the Order's dark God and protect Shepherd's Glen. The root-like cancer in his mouth and treetrunk-like of Sepulcher's body symbolize how he was murdered.

Joey loved playing in his garden and was an avid gardener. Having his lower portion of the body resembling a giant tree represents his passion for the gardening and he can be found inside the Otherworld version of Grand Hotel Atrium which is in fact an indoor garden. His body is at first encased in the bag Joey was buried in, and all of the bags around him represent them as well. 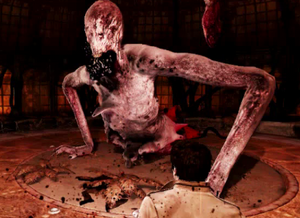