Avatar of the planet Earth

Cleanse the planet Earth of all life.

The Seraphic Radiance, later redubbed the Dark Seraphim, is a being of unimaginable power and an antagonist in the videogame Shadow Hearts. The Seraphic Radiance is the epitome of the planet's ever building anger for the creatures that slowly kill it, most notably humans. The sage Dehuai attempted to summon the Seraphic Radiance as his personal servant to take control of China from his tower in Shanghai.

In the year 1913, there was a xenophobic Chinese sage named sage Dehuai Li, a patriot of China, or at least deluded himself into believing so. Dehuai wanted to demonstrate his power to the world by expelling the Japanese forces occupying China. Dehuai had attempted a similar ritual 10 years prior, that one was supposed to open a gate to hell, but the rite was stopped thanks to a Japanese special agent named Jinpachiro "Ben" Hyuga, who was a Harmonixer, a being with the power to fuse with monsters he defeated. Ben beat Dehuai to within-an-inch-of-his-life, disfiguring the left side of his body in the process but not in time to stop the ritual as the hell gate opened up, to stop the arch-demon that came through, Hyuga used his powers to merge with it. While fusing with the demon stopped it at first, Ben Hyuga could feel the demon possessing him and asked his friend and Dehuai's brother, Zhuzhen, to kill him before the demon took control. Zhuzhen begrudgingly killed his friend and the demon gate was sealed as was Dehuai's tower. Dehuai went into hiding locking himself away in the depths of his tower for years while he recovered from his wounds.

After a long long time, Dehuai was met by a man calling himself "Roger Bacon". Bacon told Dehuai he had heard of the great Earth Sage Dehuai who nearly opened up the gates of hell and wanted to pay him tribute and so "Bacon" gave Dehuai a book called the Pulse Tract. "Bacon" said he had come into possession of it but he was sure the great Dehuai would have more use of it than a simple magican like him. Upon reading the Pulse Tract Dehuai discovered it was a book with the power to invoke the very life force of the planet on mass and was convinced Bacon was just some foolish upstart magician who did not know what he had. When Dehuai asked what Bacon wanted for the document Bacon merely stated he wanted a chance to see the ritual preformed so that he might take notes, slyly Dehuai accepted the gift.

In order to get the power to catalyze the ritual Dehuai needed someone with a link to the divine, Bacon knew just such a person, Alice Elliot, and proceeded to secure her for Dehuai. Bacon hunted her down until she was fleeing from Europe to China but Bacon was intercepted and stopped by the hero of the game, Yuri Hyuga, son of Ben Hyuga and a Harmonixer like his father. Bacon reported he had lost them to Dehuai and mentioned the interference of the son of the man who had disrupted his first ritual. Dehuai became invested in following the two and said he would do the rest of the work himself since his sacrifice was in China and he had influence throughout the country. After many attempts at hunting them down and many adventures for Yuri and Alice who had teamed up with Zhuzhen and a spy named Margarete, Dehuai managed to capture Alice. Alice's life force was drained and Dehuai began the final rites for invocation. Yuri and his friends broke into Dehuai's tower backed by Lt.Col Kawashima of the Japanese army to revive and free Alice and then defeat Dehaui before he could complete his ritual. When confronted Dehuai confessed he was not attempting his old Demon's Gate Invocation but a new one to invoke the very life force of the planet in what he called his "Reverse Demon's Gate Invocation" designed to summon a being he called the Seraphic Radiance.

Alice, Zhuzhen and Margarete chased sightings of the Seraphic Radiance all across Asia and into Europe. They split up once they reached Europe, Alice and Zhuzhen worked as traveling exorcists chasing any rumors of strange creatures they could find while Maragaete focused on weeding out Bacon who had said he lived in London. Alice and Zhuzhen soon found a vampire lord named Keith Valentine. Keith said there was a crazed young man who could turn into a monster and had crashed into one of his castle's towers and he wanted their help exorcising it, Alice and Zhuzhen knew it had to be Yuri. At the top of Keith's castle the heroes eventually found Yuri who was crazed, while the Seraphic Radiance was no longer dominant the spirits of the monsters Yuri had killed, known as The Four Masks, took advantage of Yuri's fractured mind to possess him and make him fight his friends. Yuri was defeated and subdued and Alice used her powers to go into Yuri's heart and bargain with the Four Masks to save his soul. Yuri was revived and took on the Four Mask's champion, Fox Face, and won. Yuri did not know what happened to the Seraphic Radiance but was just glad to be himself again and reunited with his friends, Bacon on the other hand was very concerned about the presence of the Seraphic Radiance slumbering somewhere inside the harmonixer, considering it to be a major threat to his plans.

In the sequel game Shadow Hearts: Covenant, Yuri is hunted down by an evil organization called Sapientes Gladio who were old enemies of "Roger Bacon". The lieutenant of Sapientes Gladio assigned with the specific task of neutralizing the powers "Bacon" wielded was named Nicolai Conrad. It had taken so long to find a way to actually stop the divine powers "Bacon" was using that by the time Nicolai actually found an exorcist tool powerful enough to neutralize him "Bacon" was already killed by Yuri, so Nicolai's attention turned instead to Yuri. Since Yuri defeated "Bacon" he, as a Harmonixer, had access to all the demonic power "Bacon" did, ironically Nicolai was deathly afraid of the Hell Lord, Amon, who while powerful was less so than the Seraphic Radiance of whom Nicolai had no knowledge of. Nicolai used the tool he had stolen from the Vatican called the "Holy Mistletoe" to seal away all Yuri's Fusions and shortly after the game's start Yuri finds his Fusion's unavailable to him and must start gathering the Malice from monster souls all over again to bring them out.

Yuri's Fusions are all different in form and name than his original Fusions in Shadow Hearts, but in essence they are all the same. There are two endings to get in Shadow Hearts, a good ending and bad, unlocking the Seraphic Radiance is part of the good one but the cannon set forth by Shadow Hearts: Covenant at the game's start shows that the sequel is playing off the bad ending, which is actually more likely for players to get unless they get lucky, are very skilled or look up how to avoid it in favor of the good ending. So in addition to all his other Fusions being sealed The Seraphic Radiance is only further buried. Yuri discovered that the Holy Mistletoe was not only sealing his powers but would slowly destroy his soul even if he died before the curse took full effect. Towards the end of the game if Yuri does several side quests and charges his Malice to its maximum with all his other Fusion's unlocked Yuri will again meet his father's ghost. Jinpachirou "Ben" Hyuga appears to defend Yuri's memories of childhood as they begin shattering from the curse. Jinpachirou expresses his pride at what Yuri has done so far and offers to help him stop the Holy Mistletoe's curse but to do so he needed to unlocked the Seraphic Radiance slumbering far down deep within him. Calling for the Seraphic Radiance meant Jinpachiro could not hold back and would become a conduit of pure destruction for the Seraphic Radiance to unleash its wrath on Yuri. He warned Yuri that if they fought, Yuri might very well die, Yuri accepts though and father and son fight to unleash the power of the "Dark Seraphim" as it is re-dubbed. After a tough fight Yuri wins and his father wishes him the best of luck with his new powers assuring him that whatever happens with the fate of the world he and Yuri's mother, Anne, both loved Yuri very much and were very proud of him. Jinpachiru fades away and Yuri uncovers the Seraphic Radiance for good. 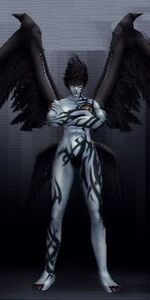 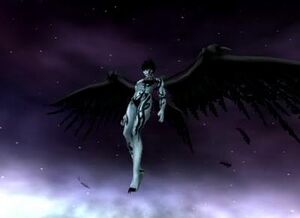 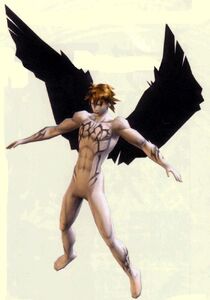 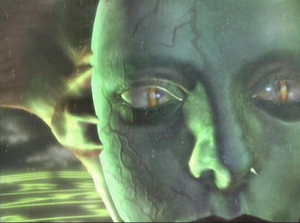 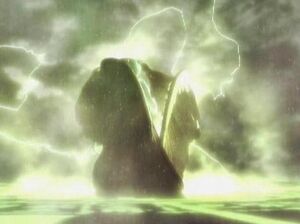 The Seraphic Radiance rises through the magic of the Reverse Demon's Gate Invocation.
Add a photo to this gallery

Retrieved from "https://villains.fandom.com/wiki/Seraphic_Radiance?oldid=3891775"
Community content is available under CC-BY-SA unless otherwise noted.