Leader of the demons

Leader of the demons

Mastery of the Bident


Super strength
Authority on the demons

Gain revenge on his uncle Acrisius and his sons.
Avenge his adoptive mother (all succeeded).
Kill all the Gods.
Convince his half-brother Heron to join him or kill him (both failed).

Seraphim is the central antagonist of the Netflix animated series Blood of Zeus. Seraphim is the son of King Periander of Corinth, and Queen Electra. Due to unprecedented events that followed his birth, he was taken care of by Ariana, a servant and friend of Queen Electra. He is the half brother of Heron, who himself is son to Zeus and Electra. He is the temporary wielder of Hades' bident and leader and first of the giant-spawned creatures known as demons.

He was voiced by Elias Toufexis.

Seraphim is shown to be driven by revenge, making most of his decisions based around hunting down Acrisius and his sons. He tends to show that he refuses any sign of weakness in his subordinates, going as far as killing one of them, in order to "cull the weak." While portrayed as merciless, he is family-oriented, and is shown to care for Heron, giving him a chance to side with him but when Heron refused to join his half-brother's regime he became more bitter towards his brother stating that he should have chosen a better side. He is even shown to hate the gods right after Zeus revealed to him that Hera was manipulating him and plotted to kill him ever since he was born and abandoned by his uncle because of this he betrays Hera and plans to kill all the gods with the help of the giants.

Seraphim is the son of King Periander and his wife Electra. Prior to his birth, his mother had an affair with the god Zeus and ended up pregnant with twins, one of which was Seraphim and the other, his brother Heron. While Seraphim was the son of Periander, Heron was Zeus' child and this enraged Hera, Zeus' wife. Enlisting the Oneiroi to alert Periander of his wife's infidelity, he threatened to kill whatever child she bore that was not his. Seraphim was born first, temporarily relieving the king, but Electra was still in pain. The king was swiftly informed that there were two placenta, which two placentas meant there were two fathers. Shortly after, Heron was born. Before Periander could execute Heron, Zeus arrived and stopped him. Electra then killed Periander before he could hurt Heron, before she and Heron were taken to safety by Zeus, leaving Seraphim behind.

Despite Zeus assuming Seraphim would be better off amongst his father's kin, he underestimated his uncle Acrisius' greed. Acrisius forced the servant Ariana to keep the story surrounding Seraphim's birth a secret and then threw his newborn nephew off of a cliff to ascend the throne himself. Seraphim survived, despite having taken fall damage, and was taken away by Ariana to be raised in secret. Procuring her sister's aid, Ariana fled. Eventually, she was forced to take shelter in a bear's cave where she prayed for gods help. Zeus heard this prayer and, trying to make some sort of amends for his misjudgment, compelled the bear sow who dwelled there to nurse Seraphim alongside her own cubs.

Ariana raised Seraphim and he was led to believe she was his natural mother. He and Ariana befriended the bears of the area, and Seraphim had them as playmates and companions. One day, Acrisius' sons managed to track Ariana down after they tortured and killed her sister's family. Together with the bears, Seraphim tried to save Ariana, but failed. After receiving a scar from one of his cousins, Seraphim was about to be killed until Zeus arrived in the form of bear to save him. Taking refuge along the eastern shores of Melidoni, Seraphim became consumed with vengeance.

Years later, Seraphim tracked down his adoptive mother's killer and viciously murdered him. When armed guards pursued him, he fled and came upon the remains of a giant washed ashore one a beach. Though he did not know it, this evil began poisoning him after he came into physical contact with the giant and he was compelled into consuming its flesh. Feasting on the giant's flesh, Seraphim was transformed into a monstrous creature and he came into the possession of Hades' bident, which was sheathed in the giant's flesh. He single handedly killed twelve men and after the last three begged for their lives, swearing fealty to him, he spared them and forced them to become a "demon" like him. Ever since then he began hunting Acrisius and his sons.

He has a white tied hair with a thick golden streak going down it that rests on his shoulder. Both of his eyes have black sclera and red pupils but due to the scar on his left eye the outside of his sclera has a gold band around it. His skin is a gray color with red marks spreading around. He has horns poking out from his head, arms, and back. His clothes consist of a black cape draping off of his left shoulder with leather bands wrapped around his shoulders and a black ragged cloth wrapped around his waist being secured by leather bands that hold metal plates on his sides. He carries around a golden spear with black and red spreading to the tip of the blade.

Upon consuming the flesh of a Giant, Seraphim underwent a transformation which altered his physical features and endowed him with superhuman physical capabilities that seemed to exceed his followers, as he was the first of the Demon race. 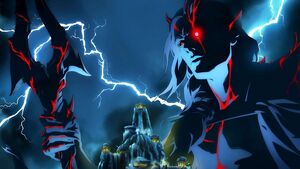 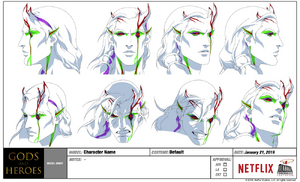 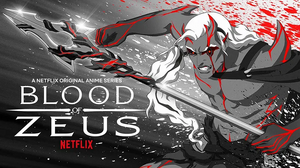 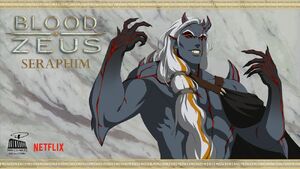 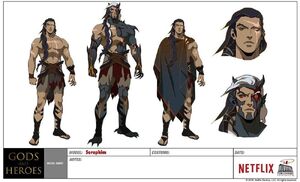 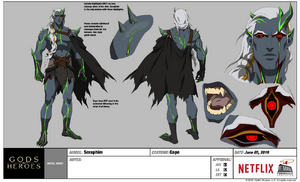