General of the Demon King's army.
Priestess of Regina.

Investigate the adventurer Kazuma Satou and the town of Axel. (succeeded)
Convince Kazuma to join the Demon King's army or kill him. (failed both)
Take control of the inhabitants of Axel in preparation for an invasion. (failed)

Seresdina is a fairly young and well-endowed woman, most likely in her early twenties, who gives off the aura of a "mature beauty". Her black hair is free-flowing, strait, short and neatly cut, with wide-swept bangs which leave her ears visible. Her eyes are a beautiful shade of black, and she has a single beauty spot just below her left eye.

Seresdina usually wears a long red and white dress, and a white cape with black trimmings over it. Seresdina also has a mace around her waist to use in combat situations.

On the outside, Seresdina exudes the aura of an ideal priest: kind, compassionate, gentle, and generous. However, this is only a facade that masks her true personality, one that is scheming and devious. She is very convincing and charismatic, using her outward persona and human nature to trick adventurers in ways that benefit her, convincing them of things like the fact that the Demon King is only a girl affected by a curse that will eventually wear off, or gaining the trust of entire towns by defeating threats she set up herself.

However, when things didn't go as she planned she became a completely reckless person who has no problem insulting and attacking anyone who annoyed her.

Seresdina was once an ordinary adventurer who began her career in the beginner town of Axel like many others. Eventually she joined the army of the Demon King as one of the eight generals who maintain the barrier around his castle. Seresdina, as the army's only human, also served as its spymaster. Seresdina often received ridicule from other members of the Demon King's army because she worshiped Regina, the minor dark goddess of puppetry and revenge. Regina was sealed many years ago in the village of the Crimson Demon Clan, as such worship of her declined until Seresdina was her last remaining follower. The seal was eventually broken, and Seresdina, as the last worshiper, was given all of Regina's blessings.

Seresdina, under the alias of 'Serena', traveled to the Adventurer's Guild and asked to meet Kazuma under the guise of being his fan (Kazuma was fairly well known by this point for eliminating five Demon King Generals). Eventually Kazuma showed up at the Guild and Seresdina introduced herself as a fan and asked if she could join his adventuring party.

Kazuma, however, immediately saw through 'Serena', and identified her as an assassin of the Demon King's army. Unfortunately for Kazuma, Seresdina, with the unknowing aid of Kazuma's party priest Aqua, was able to convince Kazuma of her priestess identity. Kazuma never-the-less rejected Seresdina's proposal.

After being rejected Seresdina began setting up several scenarios which would make the adventurers of Axel grateful to her, thus putting them under her spell. For example she would give free support spells to the adventurers who didn't have a party priest, and would allow other adventurers to take the rewards for her quests.

After a few days of covertly enthralling adventurers Seresdina decided to do something about Kazuma. She led him into a secluded alleyway and began to tell him a lie about the true nature Demon King. Seresdina told Kazuma that the Demon King was actually a little girl suffering from a curse, causing them to perform the unspeakable atrocities; however the curse on the Demon King would soon end, and as such Kazuma wouldn't have to defeat them.

The next day, in order to further dissuade Kazuma from taking action against her, she demonstrated the powers of revenge that Regina had given her by having him stab her in the hand. A few days later, Seresdina told Kazuma that because she owed him a favor (he gave her money once after she was fleeced by Vanir), she would not harm the townspeople in anyway if Kazuma chose to fight her alone, although she did not believe he would actually take action against her.

With this information Kazuma decided that he would stop Seresdina, who had caused a lot of frustration for him and his party. However, because Kazuma couldn't think of a good plan on the spot, he simply drop-kicked Seresdina in the face to vent his frustrations. Over the next few days Kazuma began pulling relatively harmless pranks on Seresdina, usually as a way to gauge her strength and the application of her revenge power.

These pranks slowly began to break Seresdina's mental fortitude. She was eventually able to catch Kazuma off guard in a secluded area while he was preparing his next prank. Unfortunately for Seresdina, Kazuma was able to use his wind breath skill to lift up her skirt, and then his bind skill to tie it to the top of her head, essentially exposing her bottom half completely. Kazuma then made his escape as a crowd of people emerged to see Seresdina's naked bottom half. 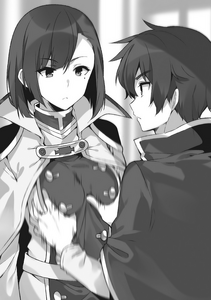 Seresdina's breasts are groped by Kazuma. 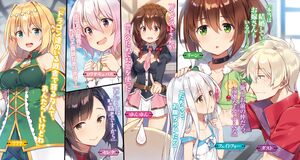 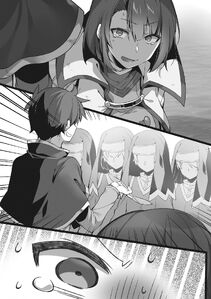 Seresdina is given over to the Axis Order.