Sergeant of the British Army

Find the treasure of Monkey City.

He was portrayed by Ron Donachie.

Sergeant Harley is first seen when Mowgli gets arrested for the "attempted murder" of his childhood friend Katherine "Kitty" Brydon. He learns that Mowgli has a bejewelled dragger and he tries to interrogate Mowgli into telling him, Captain William Boone, and Lt. John Wilkins where he got it. But he gets kicked in the crotch and loses his temper, beating Mowgli savagely with a truncheon only to be reprimanded by Colonel Brydon as he enters. Brydon tells the three officers to the prisoner some chairty and as he leaves, Boone coldly tells Harley to further torture the information out of Mowgli. He does so but to no avail even when he tries speaking Hindi. Then Kitty enters the dungeon and tells them about her plan to reintroduce Mowgli to civilzation. Boone, Wilkins and Harley insist that Mowgli is vicious and uncivilized and when accused of the bruises inflicted on Mowgli they lie by saying that Mowgli did it to himself despite their attempts to stop him.

Sergeant Harley is next seen during the capture where he, Boone, Wilkins, Buldeo, Tabaqui, and several bandits try to capture Mowgli to make him to lead them to the treasure they're after but it fails when Mowgli fights back, kicks Harley in the crotch again and escapes them. Sergeant Harley is then seen during the revolt in which he, Boone and Wilkins betray Kitty and her father and with the help of Buldeo, Tabaqui and the bandits kidnap them. When asked by Colonel Brydon if he was in cahoots with the scoundrels, Harley affirms by saying that he was unhappy with not getting paid during his 25 years in the army. When Mowgli shows up Boone tells him to approach them or else "unpleasantries may occur". To further prove Boone's point, Buldeo tells Tabaqui to hold a knife to Kitty's throat and Harley tells Mowgli to "take us to the treasure and she'll live". Mowgli agrees, but warns that they will not survive the journey.

After Mowgli is captured by his enemies, they are being watched Bagheera and the wolves as they camp in the middle of the black jungle during the night. Harley is annoyed by Wilkins complaining about the eerie sound of wolves howling and repeatedly tells Mowgli to "shut them up". Mowgli does with a single howl, but the silence is interrupted by the growl of the legendary tiger Shere Khan. Harley and Wilkins are frightened, but this is only the beginning of their troubles. The next morning, Harley wakes up to see Mowgli escape with Bagheera's help and chases after him. As he runs recklessly through the shrubbery, he falls into a pond of quicksand. Realizing the danger he is in, Harley panics and screams for help. Only Wilkins arrives to the scene and frantically tries to reach for one of Harley's hands. Wilkins manages to grab Harley, but then the quicksand begins sucking Harley under, causing him to lose his grip with Wilkins. With his last breath, Harley ungratefully shouts "Damn you, Wilkins!" before sinking out of sight to his death. Boone and the others arrive to find the mournful Wilkins staring at Harley's grave, but while Buldeo and Tabaqui gave their sympathies over the loss of Harley, Boone shows no concern over it, much to the disgust of Buldeo and Tabaqui. 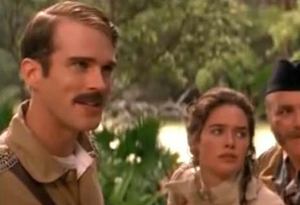 Wilkins trying to save Harley himself.

Harley succumbing to his death in the quicksand.
Add a photo to this gallery 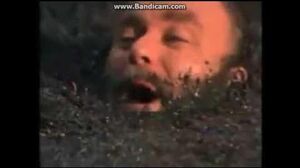 Retrieved from "https://villains.fandom.com/wiki/Sergeant_Harley?oldid=3900149"
Community content is available under CC-BY-SA unless otherwise noted.