Major Sergeant of the Marley army

Exterminate all Eldians on the planet.

Sergeant Major Gross is a minor but pivotal antagonist in Attack on Titan. He was the cruel and sadistic commanding officer of the Marleyan army.

In the anime, he was voiced by Ikkyuu Juku in the Japanese version, and by Bradley Campbell in the English dubbed version.

Gross is first seen slacking by the riverside with his colleague Eren Kruger where they spot Grisha and Faye Yeager, having wandered out of the Liberio internment zone to observe a blimp. Gross and Kruger recognize them as Eldians based on Faye's bracelets and ask for their exit permits. Seeing that they lack the permits, Kruger gives the children the choice of either working or receive punishment. Grisha chooses punishment and requests to take Faye's punishment as well. The two accept the request and Gross leaves to escort Faye back home while Kruger beats up Grisha.

However, instead of taking Faye back home, Gross takes this as an opportunity to teach his sons about how the world works based on his beliefs of the Eldians. He then throws the eight-year-old to the ground and has his sons' dogs violently rip her to shreds. Her mutilated body is found in the river the next day, to which Gross claims to the grieving Yeager family that it was her fault for wandering around town without permission. Because Faye was an Eldian and not a Marleyan, Gross easily got away with Faye's murder. But Grisha is able to tell that Gross was lying.

Through the next fifteen years, Grisha builds a resistance group after being told from Grice about the truth of Faye's death. Later, Grisha's son Zeke would betray his parents and sell out the resistance group for his and his grandparents' safety. They were arrested for treason and brought to Paradis Island in a Marley ritual to turn the Eldians into Titans. Gross was annoyed by Grice's cries and pushed him down the cliff, only surviving thanks to a sand dune at the bottom. Gross then tells Grice to run and make it to the walls. When one soldier asked Gross about what he did, he reveals that Grice would never make it to the walls, only using him as bait to lure the Titans away to the mainland.

As Gross' soldiers inject the Titan serum into the other Restorationists, Gross orders Kruger to silence Grisha as he brought out Dina, taunting her that she and Grisha would make a "great" Titan couple before injecting her with the serum and pushing her down, turning her into the Smiling Titan.

After witnessing his wife turn into a Titan, Grisha angrily accuses Gross as the one responsible for murdering his sister. Angered, Gross takes the last Restoration member and orders his soldiers except Kruger to return to the ship. Grisha asks Gross if he would feel remorse if someone that close to him would meet their fate similarly to Faye. Gross coldly denies, revealing that he plans on getting rid of the entire Eldian population by making them become Titans or food for the Titans. He has the last Restoration member turned into a Titan and prepares to push Grisha over to enjoy watching him fight for his life. Suddenly, Kruger betrays Gross and pushes him off the cliff, revealing himself to be an Eldian spy codenamed "The Owl". Gross is caught by the Titan and has his face bitten off.

Gross is portrayed as a merciless and sadistic man who enjoys watching the Eldians suffer. An extreme racist and prejudice over Eldians, he wants to make sure that all of the Eldians die in oppression and cruelty, going as far as having his dogs rip apart an innocent girl just for being an Eldian. He also lacks any honor for others of Marley, coldly responding to Grisha's question that he would not care if any of his sons met a death similar to Faye's. 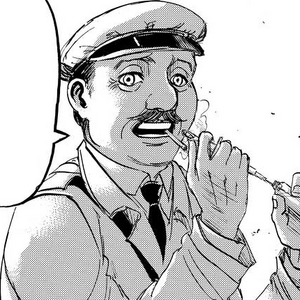 Gross in the Manga 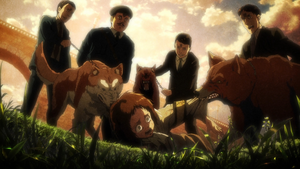 Gross and his sons feeding Faye to their dogs. 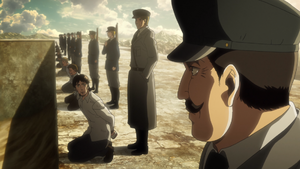 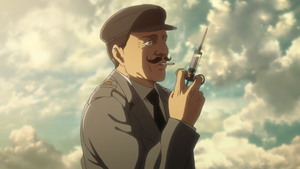 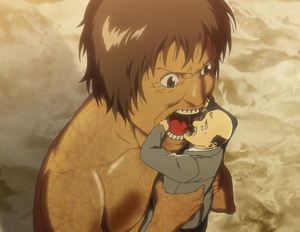 Gross' death.
Add a photo to this gallery

Retrieved from "https://villains.fandom.com/wiki/Sergeant_Major_Gross?oldid=4230332"
Community content is available under CC-BY-SA unless otherwise noted.