Sergey Volkov (in Japanese: セルゲイ・ヴォルコフ, Serugei Vorukofu) is an antagonist in the second season of the Yu-Gi-Oh! ARC-V anime series. He is an infamous criminal known as The Duelist Crusher who was cybernetically enhanced as one of Jean-Michel Roger's key enforcers and pawns in his takeover of the City, essentially functioning as his right-hand man in the words of the Executive Council.

As a part of his final mission for Jean-Michel Roger's ultimate overturn of power, Sergey dueled Jack Atlas where his former personality regained control and he lost, going out with a bang and his humanity intact as he fell from the platform. Once below he was attacked by the rioting commons eliminating him as a pawn and Jean Michel Roger's most valuable servant.

Sergey is a sadomasochistic but strangely philosophical Duelist who Duels in a cruel and unorthodox manner that is very original for a Yu-Gi-Oh villain as he does not rely on an overpowered monster or underhanded strategy to win: He continually inflicts damage to himself without attempting to stop it in addition to reveling in his own pain giving his opponent a false hope of victory and then crushing them, being submissive for most of the Duel, then defeat them with overwhelming power. He enjoys this psychological advantage over his opponents, showing either an acute mind with an unorthodox way of thinking or simply an eccentric mental state. Either way his style unbalances his opponents rather effectively whenever he faces an opponent for the first time.

Along with the enjoyment of his own suffering he revels in the suffering he causes towards his opponent, in his Duel against Yuzu he brutally rammed her Duel Runner with his own to stop her from gaining an action card and the force thrust her through a building, as he went to describe the carnage as "beautiful". He described her will to continue on the duel as both Beautiful and Ugly showing a skewed mentality towards what he considers to be aesthetically appealing to him, not a winner to loser mentality as the tops but instead he finds the ultimate beauty to be the process of destruction be it his own or his opponents.

Though these personality traits are usually restrained by Jean-Michel Roger through the use of a mind-control device, when Sergey gets highly excited or surprised by illogical Dueling behavior, the mind control breaks partially, revealing his own hot-blooded nature, expressing his love for "beautiful" duels which excites him even more and further unscrews the restraints placed on his personality. This obsessive desire is worth everything to him, refusing rescue from a fatal fall so as not to ruin the moment that he was reveling in. This last part could be however a desire to go out in a "beautiful" style as he had been essentially reduced to being a slave of the Director of Security and his ambitions.

Sergey initially runs a "Thorn Prisoner" Deck. His Deck focuses on the reduction of his own LP at a calculated rate through the effects of his monsters and through Thorn Counters. To facilitate this, his monsters all have 0 ATK and DEF. Sergey can use both Synchro Summoning and Fusion Summoning to bring out his key monsters to capitalize on his low LP and inflict large amounts of damage.

Later, he switches to an "Earthbound" Deck that he debuts in his Duel with Barrett and Yuya Sakaki. Like his previous Deck, it focuses on Fusion and Synchro Summoning. The main strategy of this Deck is to simultaneously Summon Fusion and Synchro Monsters, by using the same materials for both Summons with the effect of "Underworld Resonance, Synchro Fusion". Some of his cards also gain effects when the Field Zone is occupied. 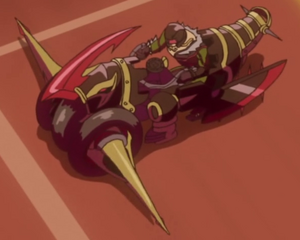 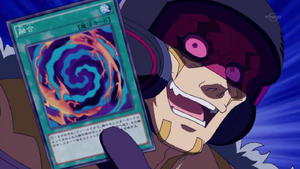 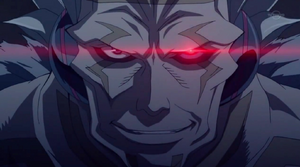 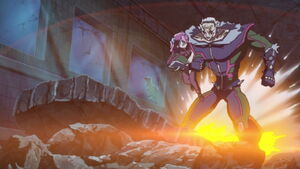 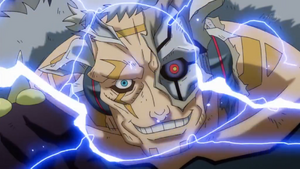 Sergey before his death.