The leader of the dark witch coven, the Order of the Blood Moon

Serilda of Abaddon is a one-shot villain of the TV show Sleepy Hollow and the main antagonist of its spin-off novel Sleepy Hollow: Children of the Revolution by Keith R.A. DeCandido.

She is a Greek witch She worked alongside Hessian soldiers in the Revolutionary War and was eventually burned at the stake. She thenturned into a zombie who collected ashes so that she can resurrect herself, after receiving assistance from Andy Brooks. She was originally the high priestess of the Order of the Blood Moon, a dark coven, but was ultimately undone by a good coven known as the Sisterhood of the Radiant Heart, which Katrina Crane led.

She is portrayed by Monique Ganderton (who also played an evil witch in Hansel & Gretel: Witch Hunters and served as the on-set stunt actress of Proxima Midnight in Avengers: Infinite War and Avengers: Endgame) as human form and by Roxy Olin as a mild-burning zombie.

Serilda was of Romany descent from Greece, and Ichabod Crane first encountered her back during the Revolutionary War when his regiment returned to their camp near Albany one evening during a blood moon, only to find it mysteriously destroyed, the soldiers there were slaughtered by being burnt to a crisp.

While inspecting the remains of the camp, Ichabod suddenly sensed a malevolent presence in the nearby woods, and saw Serilda, peering out from behind a tree looking at him.

He didn't know who or what Serilda was, only that the sight of her chilled his blood like nothing before. General George Washington believed that Serilda was a high priestess who was the founder and leader of a coven of evil witches who were allied to the British.

It was revealed that the Sisterhood of the Radiant Heart, the coven to which Katrina led, cast a spell using white magic which made Serilda vulnerable, resulting in her capture and subsequent execution by burning. While she was being burnt, she swore to return by taking the flesh of the descendants of the ones who condemned and executed her.

In the modern day, Andy Brooks, the minion of Moloch, Serilda's presumed master, uses a medallion given by the Demon to him to revive her. She plans to get the ashes of the descendants of the people who brought about her death to combine with her bones in a ritual in order to fully resurrect herself. She starts by going after Jeremy Steven Furth, the descendant of the magistrate who sentenced her to the stake. With Brooks's help, she attacks and fatally burns Furth in his car, and taking some of his burnt remains. She then takes the urn containing the ashes of the other last descendant of the magistrate and goes down to The Munition Tunnels beneath Sleepy Hollow where the remains of burnt witches and her bones were hidden away.

Ichabod and Abbie attempted to prevent the ritual, but failed and Serilda was able to fully revive herself. Ichabod had a pistol given to him by Abbie; however, he was unfamilar with modern firearms and drops it after one shot, which Serilda easily blocked. Serilda then tells them that it was Katrina who bound her powers, and was now imprisoned in the Purgatory ("World Between Worlds"). Before she was able to kill them, Ichabod threw a torch which landed on a nearby chest of gunpowder that was stored down in the tunnels, detonating it and bringing Serilda her second and final death.

Being a high priestess, Serilda was a powerful witch and had an affinity for manipulating fire. As stated, Serilda was able to use her abilities to decimate an entire camp, reducing everything in her path to ash. She could also instantly set a car on fire, or catch point-blank bullets, reducing them to ash in the very pit of her hand. Despite being skilled with fire, she's been killed twice by it. She also displayed other abilities such as flight and teleporation. Even though Serilda was strong, it took a group of five witches to repress her power so she could be stopped. 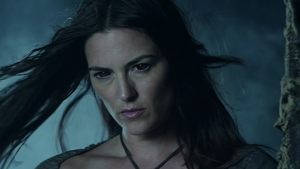 Serilda while she was still alive. 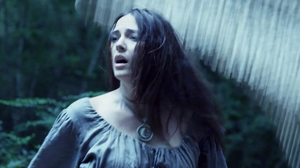 Serilda is captured and subsequently sentenced to burning at the stake. 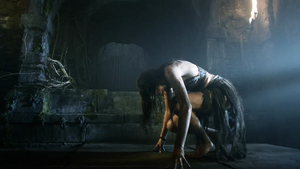 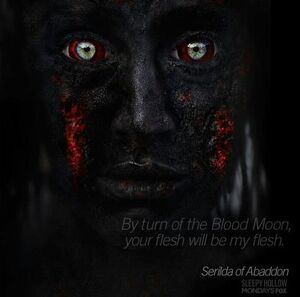 Serilda's promotional poster
Add a photo to this gallery

Retrieved from "https://villains.fandom.com/wiki/Serilda_of_Abaddon?oldid=3530102"
Community content is available under CC-BY-SA unless otherwise noted.