A Movie of Eggs

Take control and give orders to reptile eggs.

Be the new leader of Reptile Eggs.

Murderous Usurper
Serp the Rattlesnake Egg, also known as simply Serp and Serpi, is a rattlesnake egg and the main antagonist from Mexican film A Movie of Eggs.

Member of Coco's gang. He's very quick tempered, which contrasts starkly with the easygoing nature of the other reptile eggs. He's constantly scolding Coco into concentrating on the mission at hand. Due to being a snake egg, he lacks hands and so depends on his surfacing tail to grab objects. In the end he's thrown away by an annoyed Coco who, as he states, is "sick of his rattle".

It is classified as an egg without arms and holding between both legs, green spots on some sides in cornsilk hull, eyes of yellow irises with fine pupils in which straigh eyebrows are superimposed, four pairs of poisonous teeth, not to mention the long snake tail that cracks his back and the rattle that sounds when move it.

Raised by his uncle in "the reptile pit", he performed better his ability to break chicken eggs out of hatred for them after many years. Standing out above the rest, he has received praise from the chief crocodile (who is Coco's father), for having the vigor to take the family tradition more seriously, which is why he usually has the confidence of his gang, by delivering better measures of transgression and extortion.

Seeing that Toto, Willy and Tocino had infiltrated into "the pit of the reptiles". He was presented with the other members in the song performed by Coco, describing him as someone cheerful, vivacious, and very happy. The band of reptile eggs cornered them and one of them was cruel Coco right hand, which is Serp was anxious to destroy, but to see that these escaped with the help of Bibi and acrobats eggs, they decided to follow them to honor their parents and relatives, trying to follow throughout.

During the flight of Toto and his friends crossed to the tent at the other end, balancing on a rope. Reptile eggs failed to send Iguano for them, so Serp demanded to call Torti to cut the rope and shut up, but it was too late, since they could safely reach the front tent. Unable to kill their victims choose to tie the rope again (with the help of Iguano who unfortunately fell back in the attempt), using hooks to hang them and then move with them, finally reaching where they wanted to go. Entering through that tent, Coco shouts hysterically at Serp's face when he learns they harbored circus freaks.

Finding no trace of them they are about to give up, but from a distance Torti warns them in signs, and tells them where they took refuge. The show managed to intercept them at the Confenti Eggs club, so Serp threatened to crush anyone who does not tell the whereabouts of chicken eggs, then by a careless moment to find and abduct Willy and Bibi, meanwhile Tocino reaches Toto notify of what happened. After a few hours of reflection is about to save.

At sunrise the Reptile Eggs expect patients to the fair opens, the rollercoaster is activated and crushed without mercy. When Toto comes to the rescue is discovered by Serp so at the time the Confetti Eggs involved with the military, beginning an epic battle between good and bad guys. The fight was seen to Serp destroying and bringing down several chicken eggs. After finishing all the war of the bands, Coco regrets his acts as a bully and decides to get rid of Serp throwing away.

Somewhere in the countryside, Serp tied, falls from far away, until you run into the two tlacuaches waiting for your dinner. The egg flees slowly, taking advantage of the fact that the two hungry were crying with happiness, and when they left to chase him, he bit Cuache in the hand.

After the initial credits the bloopers pass and in some of them Serp appears. In the first one he releases a rudeness when he realizes that the troops were cartons with photos of them, in the second he is seen sitting at the table to toast for Toto, now become a chicken, laughing silently for every shot they made Los Poeta Huevos (Shakespeare Eggs).

Appears as a minor character, trapped by the Master Chef in a jar with other eggs, to be prepared as a dish at a food event in Africa.

Serp makes cameo a pre-movie PSA against cellphone usage in movie theaters, sitting in the cinema and watching the movie.

In a trailer at a glance, they interview several characters in the film, and one of them is Serp asking him if he is sure that they will laugh when they see the movie, answering that "If you do not laugh, we will give you a million dollars". 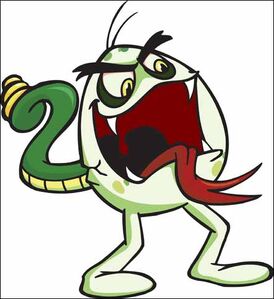 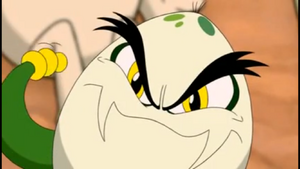 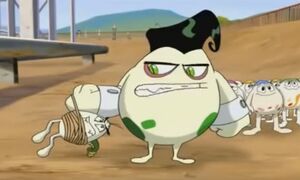 Serp tied up before getting throwed. 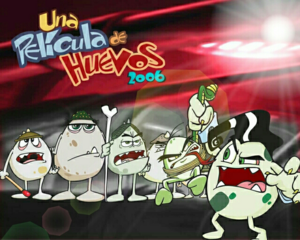 Serp, Coco and the Reptile Eggs on the promo poster. 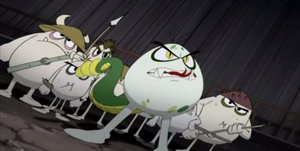 Serp ordering his troops to crush his unwanted guests. 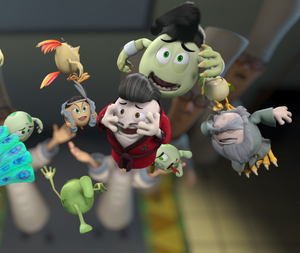 Serp and other characters in Un Rescate de Huevitos.
Add a photo to this gallery 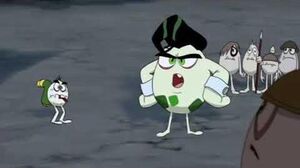 Retrieved from "https://villains.fandom.com/wiki/Serp?oldid=4212085"
Community content is available under CC-BY-SA unless otherwise noted.