Serpentera is an enormous Zord controlled by Lord Zedd and possibly the largest Zord in history, so much so that the Red Dragon Thunderzord (which was the size of a skyscraper) looked like a mosquito in comparison.

Serpentera first appeared when Lord Zedd sought to keep the Power Rangers from getting the Sword of Light. Jason briefly tried to fight the zord with the Red Dragon Thunderzord, but had to retreat into Tor the Shuttlezord after seeing that his zord was no match. Zedd went on a rampage with Serpentera, but grew frustrated when he couldn't find the rangers and decided to simply destroy the planet. But the Power Rangers found the sword and escaped before Zedd could do so, but he followed them to Earth determined to destroy Angel Grove. However, he found that Serpentera had lost too much power and was forced to go back to the moon. Later after Zedd created the Pachinko Head monster, he decided to mobilize Serpentera again. After the monster's destruction at the hands of the Thunder Megazord, the Megazord was blown apart by a blast from Zedd's zord. He attempted to use Serpentera to crush the Red Dragon Thunderzord, only for it to hide inside Tor. The Emperor of Evil tried to use his Zord to crush Tor, but it somehow lost half of its power and Zedd had to flee again.

After the Machine Empire drove Zedd and Rita off of the moon, they used Serpentera to escape to the M-51 Galaxy. It was somehow dug up on the moon by General Venjix and his cohorts where it was outfitted with a neo-plutonium core (and somehow drastically miniaturized). However when Venjix attempted to pilot it to Earth, it was destroyed by the Red Wild Force Ranger and the Wild Force Rider. It is believed that this was Serpentera was some sort of prototype or alpha version, given that the Mighty Moprhin' Serpentera was brought to the M-51 galaxy by Zedd, as well as the fact this one was much weaker and smaller and had different colors.

Serpentera is able to fire energy blasts out of its mouth and is so large it can crush almost anything. However it is so massive, it runs out of power quickly, which is the only reason the Power Rangers have been able to survive battling it. 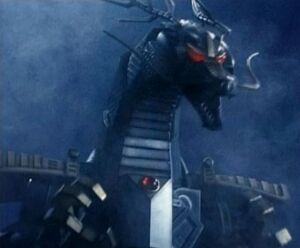 Retrieved from "https://villains.fandom.com/wiki/Serpentera?oldid=3530106"
Community content is available under CC-BY-SA unless otherwise noted.