Servum are a species of hostile and predatory creatures that appeared in each if the films in the GODZILLA Anime Trilogy as minor antagonists. They lived alongside the massive Godzilla Earth on an Earth twenty thousand years into the future.

After the abandoning of Earth in 2048, throughout course of twenty thousand years without the presence of humanity, the Servum evolved as a subspecies of Godzilla Earth.

As humans land on Earth to try and destroy Godzilla, a scouting team leaves to investigate the land. A little Worm Servum is shown crawling on the root of a tree.

A swarm of flying Servum attacks the camp. They kill and injure a large amount of crew members, and damage their tech.

Later, during the crew's battle with Godzilla Filius, a swarm of Servum appears and attacks the mechs in the air. The crew eventually dive them off.

After the crew kill Filius, and shortly before Godzilla Earth's emergence, Servum take to the wing, and fly to the skies as the ground shakes.

Towards the beginning of the film, Haruo sees flying Servum circle in the skies when he walks into a pit.

Much later, when Haruo and other survivors of Godzilla's attack are walking through the forests with Houtua, Yuko Tani strays from the group and ventures into this same pit. Suddenly, tendrils erupt from the pit's floor, and pull her to the ground. Worm Servum come out of the pits walls, and slither towards Yuko. Luckily, the other people hear her, using bullets and arrows alike to shoot and kill them all.

However, flying Servum touch down from the skies, and attack the group. But then, a group of survivors, lead by Metphies, have artillery tanks and mech to slay the Servum and rescue the other people and Houtua. The remaining Servum retreat.

Later, the Houtua escort the humans to the source of the Nanometal, which was used to make Godzilla. After 20,000 years, though, it developed into an entire city: Mechagodzilla City. Flying Servum attacked the group when they walked out of the cave. Suddenly, Nanometal pikes came out of the ground, and impaled them. Their corpses were then envelopes by the Nanometal.

The Servum do not do anything villainous in this film. They are seen for brief points in the film. For example, a few Flying Servum are shown trying to avoid lighting strikes and struggling to fly against the strong winds produced by Ghidorah’s portals forming. In another scene, some Servum are shown fleeing from the massive Ghidorah as it and Godzilla Earth battle. The last scene they appear in is when the sun rises after Godzilla defeats Ghidorah, where they fly among their master and savior.

The Servum appear to have a savage and animalistic personality, not shown the slightest degree of sentience.

They are seen in the forests of 20,000 A.D. Earth, and as shown in an image on the bottom, ambush prey. They also appear to fly and attack flying targets, when they destroy Mecha flying in the air. This same occurrence shows that they have a swarming mentality, as the Servum Attack the mechs in a swarm.

They go after the humans, similar to their much larger relative, and even aid Godzilla in his fight with the humans. They also have a habit of cannibalism, which was evident when the flock of Flyer Servum fed on the deceased Worm Servum.

Similarly to Godzilla, they have a rugged, treelike appearance. Contrary to their superior relative, however, the Servum are slender bodied life forms. They possess small spines that run down there necks, backs, and tails. They have reptilian heads attached to serpentine necks. Both jaws contain sharp, needle-like appendages in the place of teeth. They also have three pairs of red, bead, like eyes.

The flying Servum are roughly 10 meters in length. They possess the previously mentioned characteristics, with addition of a few defining ones. They resemble dragons and have dark blue skin. They also have long wings and back limbs, akin to a Wyvern. These wings are long and fan-like. In contrast, the back limbs are diminutive in stature, and slender. Unlike a Wyvern, they have small forelimbs with tiny, claw-like finger-tipped hands. tails end in a spiky club, which could be used as a weapon or help stabilize them in flight.

The worm Servum are far smaller than their fellow Servum that fly, at a max length of 6.5 meters. They have the same bark-like skin texture of skin, and the same or of skin. However, they have a smooth body, with no segments or fiber-like parts. They also have no legs. However, they differ most in their head. The heads have a sucker-like mouth, with no jaws. Rows of teeth line the opening and insides.

Similarly to Godzilla in Godzilla: Planet of the Monsters and the M.U.T.O.s in Godzilla, the Servum have the ability to discharge an electromagnetic pulse.

The metallic tissue that the Servum possess provides them a decent amount of resistance to attack.

The Servum can fly in their flying form.

In their worm form, the Servum can tunnel underground.

Worm Servum are able to use roots to snare unsuspecting victims from below.

The Servum are very agile and fast.

Servum can be killed by multiple bullet shots in classic weak spots. Also, artillery fire from a Multipodal Battery kills them fairly easily.

The Servum have proven to be especially weak against Nanometal. This is shown to be accurate when the Houtua arrows, which had Nanometal tips, on earth shot the Worm Servum. Also, the Nanometal pikes generated by Mechagodzilla City fatally killed the Flyer Servum when they were skewered by the pikes. 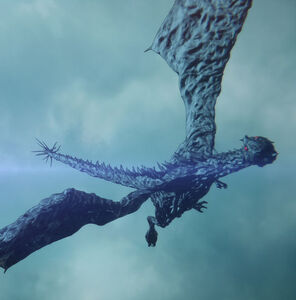 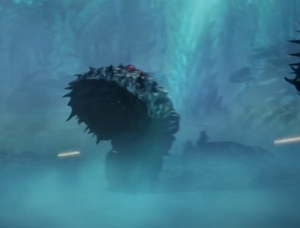