Leader of the Heretic Faction

Turn the Covenant away from the Great Journey (succeeded posthumously)

Sesa 'Refumee, also known as the "Heretic Leader" was a supporting antagonist in Halo 2. He was the leader of the Heretics who had taken control of the Gas Mine on Threshold and a small base on Basis, he also had Forerunner sentinels as well as 343 Guilty Spark on his side.

He and his followers wished to end the Great Journey after he had discovered that the Prophets were false, the High Prophet of Truth became angered by Sesa and sent his new Arbiter, Thel 'Vadam, and lances of Special Operations soldiers to assassinate him and the other Heretics. Vadam fought through waves of Heretic soldiers and Flood forces until he finally confronted Sesa at the Seraph, where the coward planned on escaping. Although outnumbered, Thel managed to kill Refumee and capture 343 Guilty Spark. He is an antagonist in Halo 2 and serves as the main antagonist for Arbiter's first half, similar to the High Prophet of Regret who was the main antagonist of Master Chief's first half. 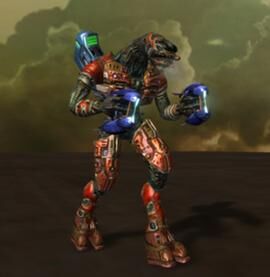