Set, also known as "Father Set", is a nearly all-powerful demon from Marvel Comics known as an elder-god and once ruled over a young Earth as a living god alongside other similiar beings until they were driven away during a great purge to rid the world of their evils.

Set is depicted as one of the first of the elder-gods to go rogue and seeks to destroy or enslave mammalian life in favor of a world ruled by reptiles (as it had done during the age of the dinosaurs).

Afterwards, during the Hyborian age, Set was a deity worshipped by a variety of cults and dark wizards such as Thulsa Doom and Thoth Amon.

Too vast to be destroyed or defeated, Set lays hidden in another dimension where he pilots his endless crusade to once again return to the world of the living and bring down his apocalyptic wrath on the world. 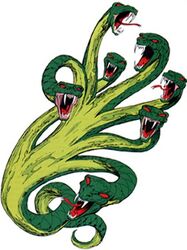 Set in Conan the Adventurer