Set (sometimes spelled Seth) is a deity found in the mythology of ancient Egypt usually depicted as the traitor among the Egyptian gods, his official titles are the god of chaos, desert, storms and foreigners. Originally Set was held in high regard due to his status a desert divinity but over the course of time would become increasingly negative until he became the demonic figure he is recognised as in modern mythology.

In the 2016 movie Gods of Egypt, Set was portrayed by Gerald Butler as the main antagonist. 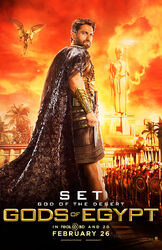 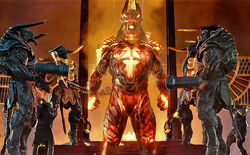 Set's true form in the 2016 movie
Add a photo to this gallery
Retrieved from "https://villains.fandom.com/wiki/Set_(mythology)?oldid=3003730"
Community content is available under CC-BY-SA unless otherwise noted.
StarWarsTrivia Ad:TrekHistory GalaxyQuest