Egyptian god of chaos and
confusion

Confusing and deceiving his victims.

Take over the world of the living.

Prevent Horus from being summoned (both failed).

Evil Deity
Seth (also known as Set or Sutekh) is the immortal Egyptian god of chaos and confusion and a villain in the Tomb Raider series. He is often depicted as a man with the head of a mysterious animal; sometimes interpreted as anteater or simply a snake. He made his appearance as the main antagonist of The Last Revelation where Lara accidentally set him free when visiting his tomb. At the end of the game he appears as a final boss in the level "Temple of Horus".

Seth is the son of Nut and the brother of Osiris, Isis and Nephthys.

It is said that Seth murdered his brother Osiris, causing a long, violent fight with his nephew Horus over who should be the earthly ruler. Finally other gods were called to judge and they decided that Horus should rule over the living while Seth be imprisoned for his crimes.

He would however escape imprisonment when Lara Croft would take the Amulet of Horus, not knowing that she freed Set from imprisonment until affirmed by Jean Yves. She sets out to undo her mistake and find the Armour of Horus to summon Horus and stop Set before he gains his physical form.

Meanwhile Set expresses full intent to "violate the world" and travels in a non-corporeal form throughout the game, accompanied by a swarm of locusts while the skies and clouds darken due to Sets presence. While non-corporeal, Set will use his limited powers to resurrect the dead and unleash monsters all across the land, including releasing leading his monsters to attack the city of Cairo and decimate the entire cities population, turning it into a lifeless warzone with the military being massacred; sole few survivors would assist Lara against the 'creature of the past' in the Cairo level in-game.

Set would also possess Von Croy and have him abduct Jean Yves and threatens to end his life so he can make Lara give up all pieces of the Armour of Horus so Set can destroy it. Lara fortunately rescues Jean Yves but Set would find the Ceremonial Tablet and would later confront Lara while still possessing Von Croy and attempt to make her give up the armour by striking a twisted bargain where Lara would have "the ultimate power" and the "life or death" over others along with "worship". Lara knows better than to trust Set and flees the area while she takes the tablet.

Lara would place the remaining pieces of the Armour of Horus to summon Horus and stop Set once and for all but Set would arrive in his locust non-corporeal form and destroy the Armour of Horus while accumulating into his physical form, he says several sadistic things to Lara before attempting to kill her and then fulfill his intent to spread his plague all across the world. The Amulet of Horus would drop in the water during the cutscene which would result in Lara requiring to grab it in-game.

Lara would escape the chamber and evade Sets wrath before she then escapes and uses the Amulet of Horus to close the trap door and seal Set within the temple for all eternity. Imprisoning Set indefinitely.

Seth himself is a powerful and dangerous deity. He shoots green bolts from his gauntlets, he is able to fly and also attack anyone or anything with some very harmful melee attacks such as bouncing or impaling, this attack can be a "finalization" like if Lara's health is too low and she suffers this attack; he will get Lara by her neck and shortly after release. Seth also has power over not only the dead but also the mythological creatures existed within the Egyptian mythology, and he can also possess other beings including humans, like he did with Werner von Croy. 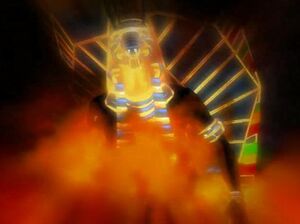 The Bringer of Plagues aka Seth. 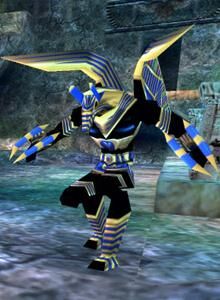 The Ruler of Darkness aka Seth.
Add a photo to this gallery

Retrieved from "https://villains.fandom.com/wiki/Seth_(Tomb_Raider)?oldid=4139778"
Community content is available under CC-BY-SA unless otherwise noted.