Chairman and CEO of Kaiba Corporation

He is Yugi Mutou's arch-rival, the CEO of the KaibaCorp gaming company, the older brother of Mokuba Kaiba, and the adoptive brother of Noah Kaiba. His primary goal is to be recognized as the greatest Duel Monsters player in the world.

Although he is in general an honorable person, Seto is cruel, rude, sarcastic, arrogant and occasionally aggressive. However, as the series progresses, Kaiba gradually becomes a more sympathetic character, especially after receiving a mind crush after his first duel with Yugi. In addition to his antagonistic roles in the second series anime, Kaiba also serves as the primary antagonist of the original Toei Animation version of Yu-Gi-Oh!.

In the anime, Seto Kaiba takes on the role of an anti-hero and is shown to have a dislike toward Yugi and company. Since his time in Gozaburo Kaiba's care, Kaiba's emotional range has been reduced to that of a brick. His expression is often stern, scathing, and unfriendly and he rarely ever smiles, if at all. When interacting with others, he is often perceived as selfish, rude, sarcastic, condescending, vituperative, and disrespectful. When he is forced to work as part of a team, he is faced with difficulty adapting.

His fatal flaw is his arrogance in himself and his accomplishments. He believes that relying on anyone else only slows him down instead of pushing him onward, and that everyone in the world is alone. Since he is extremely logical, he discounts magic of any sort, passing it off as unreal, and defies destiny and fate (in the sub, he was more accepting of the existence of the supernatural, but doesn't allow it to interfere with his goals). When it comes to the game of Duel Monsters, he is competitive to the extreme, claiming that being on top is the only place for him. But his overconfidence makes him boast about his superiority and see certain others as being inferior. He doesn't like anyone using his cards (particularly the Blue-Eyes White Dragon), be it against him or otherwise. Losing is something Kaiba does not take lightly, even when it is against his greatest rivals.

Despite his vindictiveness, Seto Kaiba is still honest and compassionate deep down, often using his resources to help those in need and acting as a hero when need be. This is due to two things: His love for his younger brother Mokuba, who looks up to him as a hero, and his hatred for his adoptive father, Gozaburo, who he vows to never emulate. And while he does act rude to Yugi and his friends (Joey especially), the time of when he is at his cruelest is towards people who deserve it, such as those who threaten his brother or the world for that matter. The only time he was ever truly evil was in the first episode until Yugi performed the mind crush on him.

As a child, Seto was a bright boy, protective of his brother, and mainly selfless. After he and his brother were adopted by Gozaboro Kaiba, he was forced to undergo vicious studying that made everyday feel like torture while building up hatred for his adoptive father. During Seto's birthday, his adoptive father gave him a 2% share of KaibaCorp (in the 4Kids dub, $10,000,000) and was told that although he could spend the money any way he wished, he must return 100 times (in the English dub, 10 times) the amount in one year. Seto returned all the money within a single day. He did this by buying 51% shares of a small company that cares for its employees, Seto then made the president buy it back, under threat of it being shut down and leaving the employees jobless.

Kaiba had ended becoming almost as ruthles as his adoptive father himself because of the treatment Gozaburo gave him, even going so far as to drive his adoptive father to commit suicide after he took Kaiba Corp away and left him with nothing. He is also seen as a master of all games, but his favorite is duel monsters. Kaiba even when becoming head of Kaiba Corp continue to be an incredibly greedy and sadistic monster with a sociopathic and borderline insane personality. In the manga he attempted to steal Yugi's grandfather's Blue Eyes White Dragon card when Yugi when brought it to school one day by switching it with a counterfeit while proceeding to bash him with his briefcase when he demands the card back until Dark Yugi appeared and dueled Kaiba to take back the card ended in Kaiba's defeat. Yugi then gave Kaiba a Penalty Game where traps Kaiba in a illusion where he continuously being eaten by monsters. While in the 2nd anime sometime after he learned that Yugi's grandfather has a Blue Eyes White Dragon he challenged him to a duel for the rare card which ended in Kaiba's victory. But as it turns out, Kaiba already has the other three of them and does not even need a fourth card so tear up the card so no one can use it against him since a deck can only holds 3 copies of the same card, breaking Sugoroku Muto's heart. Dark Yugi takes over and duels Kaiba, and manages to win.

(Manga only) Kaiba continues to have nightmares about his penalty game onward, which only strengthened his resolve but his resolve to take revenge on Yugi. He then constructs an entire event at a theme park, in order to plot Yugi's death, as well as his friends. Kaiba kidnaps Yugi's grandfather in order to get Yugi to come, where he duels Sugoroku in the arena of his theme park beating him with his Three Blue-Eyes White Dragon and then tears his Blue-Eyes White Dragon as a part of his penalty game for losing. In the final battle with him, Kaiba recreates the "shadow game" that Yugi made, with a large glass box that will set of an illusion on the person who loses. Kaiba notes that the shock almost killed Yugi's grandfather. During the set of events that follow, Kaiba nearly kills Honda, as well as his own brother Mokuba who he subjected to his own penalty game.

Kaiba ends up losing the match when Yugi summons Exodia, the rarest, and most difficult to summon card in the whole game. Yugi gives Kaiba under another penalty game, this one being a Mind Crush that is meant to destroy Kaiba's evil heart while ultimately leaving him comatose. But with Dark Yugi later telling Mokuba that his brother is repairing his shattered heart so that the next time he emerges, Seto will not make any mistakes.

(Both anime and manga events) From here, Kaiba became more of an anti-hero than a villain, and usually does nothing worse than trying to get in Yugi's way or make fun of Katsuya Jonouchi. In the majority of the ;Duelist Kingdom arc, he was out to save his brother Mokuba, who was kidnapped by Pegasus J. Crawford, but was sealed inside a card after being defeated by him. After Pegasus was defeated and Mokuba, Sugoroku, and himself released, Seto set out to become better than Yugi, and collect all three Egyptian God Cards. He received one that is Obelisk, from Ishizu Ishtar, and created a tournament called Battle City so he could get the other two (making it a rule for the loser to fork over their rarest card to the winner). Here, he was counting on the Ghouls entering (as they possess the two God Cards), however they kidnapped Mokuba within the 2nd anime series (though he escaped) and forced Yugi and Jonouchi to duel each other to the death, but they both survived. In the finals he is showed to be more concerned about seeing the Egyptian Gods in action than about the health of duelists such as Bakura, Joey and Mai (But in the manga storyline he was showed to be disgusted by the duel marik set up between Yugi and a mind-controlled Joey, where the loser dies by sinking into the ocean claiming that even at his worst he would never do something like that, and while in the aftermath in the duel when Joey was drowning, Kaiba drop his key to where Joey is in the water so he can free himself but claim to only save him because he admired his stupidity).

After the quarterfinals, the tournament was interrupted (in the anime only) when Kaiba, Yugi, Jonouchi, Anzu, Honda, Shizuka, and Ryuji Otogi entered the virtual world to face Noah and the Big Five, with Kaiba defeating Kogoro Daimon, and later his evil adoptive father Gozaburo, who perished when the virtual world was destroyed.

Kaiba lost to Yugi in the semi-finals and his god card, Obelisk because of the ante rule. After Yugi defeated Marik in the final round, Kaiba, as a sore loser, decided to blow up the duel tower in an attempt to destroy the memory of his loss to Yugi, escaping with Mokuba aboard his private jet while leaving the others (including his own men) on the island with his ship (In the anime the ship was damaged but they still managed to escape the explosion by using the medical helicopter). (the following events occurred only in the anime) He was then forced to fight alongside Yugi again when Dartz attempted to take everyone's souls for the Orichalcos. He defeated Dartz's henchman Amelda in a duel, causing Amelda's soul to be taken. He and Dark Yugi dueled together against Dartz. Kaiba lost the duel and his soul, but Yugi defeated Dartz, releasing Kaiba's soul from the Orichalcos.

He then hosted a tournament in which he did not enter, and in which the winner would face Yugi in the final round. His enemy, Zigfried von Schroeder, attempted to use his younger brother Leonhart to erase all of Kaiba's data. But luckily, Kaiba had it all saved on backup, and this was foiled. Kaiba later entered the RPG to help Yugi fight against Zorc Necrophades, realizing for the first time that everything unusual (such as Hell) was real and not just a trick (as he had thought for most of the show). He witnessed Yugi's duel against Dark Yugi, and finally came to accept that Yugi is the king of games.

Though in the video game Yu-Gi-Oh! The Falsebound Kingdom, he is a playable protagonist with his own campaign, he appears as a boss in both Yugi's and Jonouchi's campaign. He uses all three Blue-Eyes White Dragons and has Fusion to fuse them into the Blue-Eyes Ultimate Dragon. In Yugi's campaign, he appears in the level "Face-Off" to which he is forced to duel Yugi under Scott Irvine's orders. After he is defeated, he explains that he did it in order to rescue Mokuba to which the two then work together to take down Irvine. In Joey's campaign, which is a prequel, he appears as his role working for the emperor and sent to destroy Jonouchi's resistance group. Though Jonouchi wins the duel, Kaiba succeeds in destroying his resistance and they must separate and join up with Yugi.

Seto Kaiba utilizes a Beat-Down style deck filled with powerful monsters. His signature card is the "Blue-Eyes White Dragon", who he is obsessed with due to his past-life's affiliation with the creature. He also uses cards to power up his monsters such as "Megamorph" and cards to easily summon them like "Return from Different Dimension". Another favorite is his "Crush Card Virus", which infects the opponent's deck and destroy any powerful monsters, allowing him to easily crush his opponents. When he gained "Obelisk the Tormentor", it became Kaiba's finishing move to summon it and wipe out his enemies in one blow. 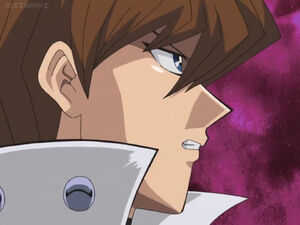 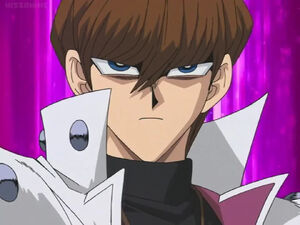 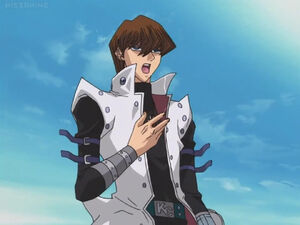 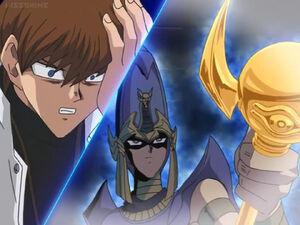 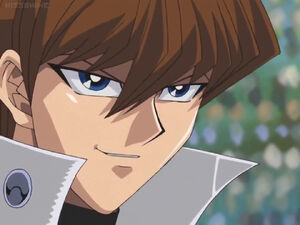 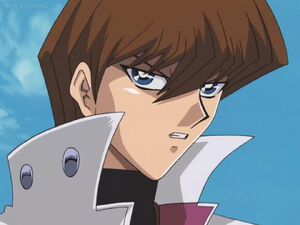 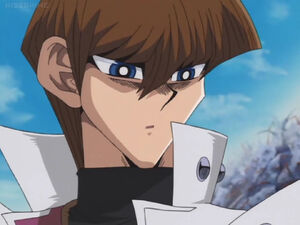 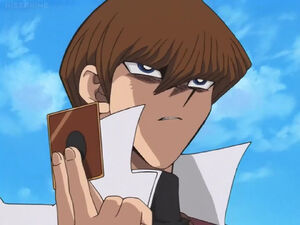 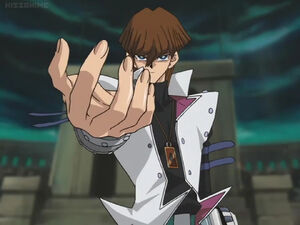 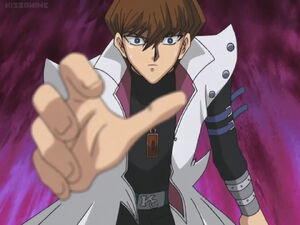 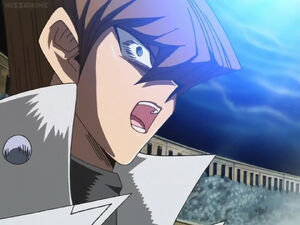 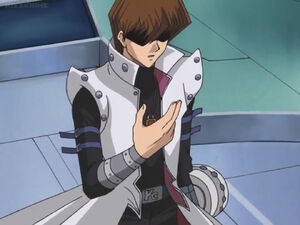 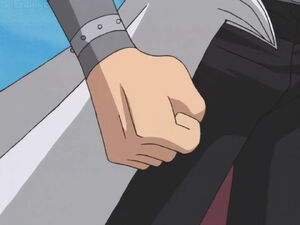 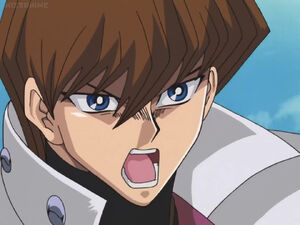 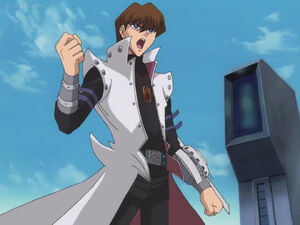 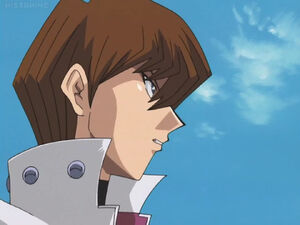 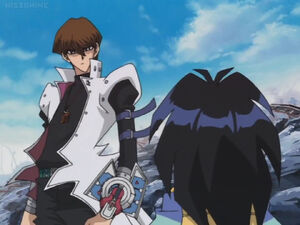 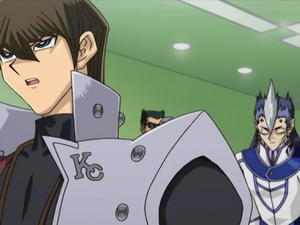 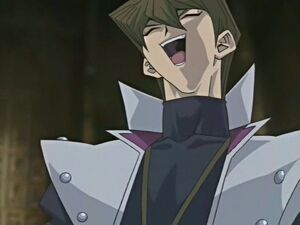 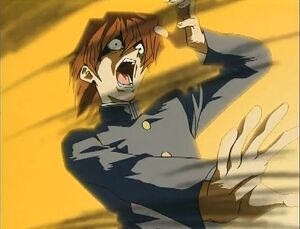 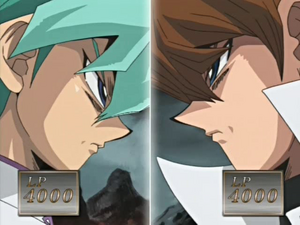 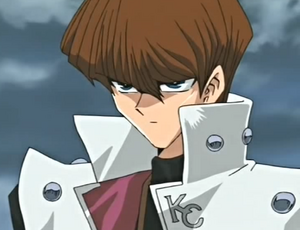 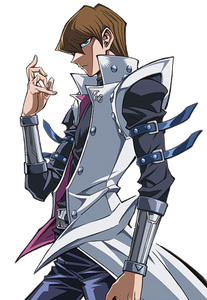 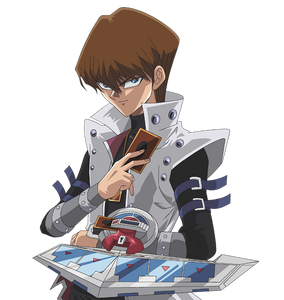 Retrieved from "https://villains.fandom.com/wiki/Seto_Kaiba?oldid=3474722"
Community content is available under CC-BY-SA unless otherwise noted.